Before I write this blog post there is something I need to confess to. It takes a strong woman to admit to their true secrets but I feel it would not be right to let you continue to read this post with out truly exposing you to what you are letting yourself in for. I am completely obsessed with Harry Potter. Like OBSESSED. I would even go as far as to say that my love for Harry Potter matches that of my love for chocolate. Now that’s a lot of love. So when I found out 2 weeks ago that Year 4 would be going to the Harry Potter Studios in London for their creative writing course, I somehow managed to wangle myself a seat on the bus and a ticket for the tour. To be honest, I would say my level of excitement matched, if not exceeded that of the boys, and whether you think that is right or wrong for a student teacher to be this way, it’s the truth and when it comes to Harry Potter nobody is changing it. I personally think that it is great for the boys to have an enthusiastic teacher, but then I am biased, because I am that enthusiastic teacher and well, of course I think i’m going to think I’m great. Anyway, my intentions with this post is to write it from an educational perspective of taking children on school trips and the educational ben 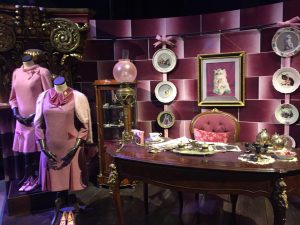 efits of teaching children through incredibly stories such as Harry Potter, but if the AMAZINGNESS of the whole day manages to get through a bit then I can only apologize.

Now although I can’t take away from the fact that I was super excited because it was a Harry Potter related trip, I was also intrigued to see how Moulsford do their school trips as one of my goals whilst here at Moulsford is to see schools from all angles, this is certainly one angle that is important to pupils no matter what school they are from. The boys were going, as the trip could aid them in their creative writing topic in English by getting their imaginations going and to see how their creative stories could become loved by many. Before we left the boys were divided up into groups of 10 or 8 and had a designated teacher for the whole day who they would have to stay with during the tour. I was pleased that I had my own set of 8 boys so that I could help out a bit, but I was especially proud that the other members of staff trusted me enough to 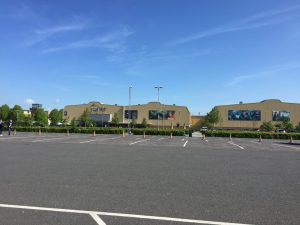 look after and not loose the 8 boys in my group. So off we went and the boys were really excited on the bus getting there, singing and chatting away and eventually we heard their cries (screams) of joy as we pulled up in front of the building. Everything was really well organised and although we were early, the people that worked there were happy to let us join the cues early and hand out wristbands to the boys and passports to keep them busy by looking out for things like stamps and golden snitches.

From the first word we lost 2 of the other groups completely in the gigantic hangers where the tours take place. At first I was really hard on the boys asking them to stay with me and make sure they were in my line of sight at all times. This was until we met up with the other groups again and I realized that the teachers were wandering round and giving the boys a lot of trust to come and tell them if they wanted to go through to the next bit. I let my boys go off and for the first 5 minutes at least, my eyes were on them. That was until I was distracted by the amazing and gorgeous displays and features from the film started to overwhelm me and I just had to look at them. The boys were completely fine whilst I was looking around that part of the hanger and I have definitely learnt the role of trust in your pupils on a school trip. 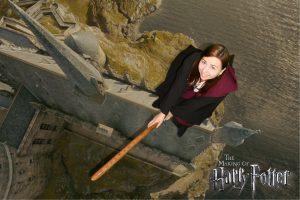 Once I had calmed down a little and realized all of this my group all wanted their photos taken riding a broomstick. We went over and they all had their photo’s taken (me too, because you can’t go to Harry Potter Studios and not get your photo flying a broomstick for completely educational purposes…) to which I was handed all of their codes and moved on. I was so worried I wou 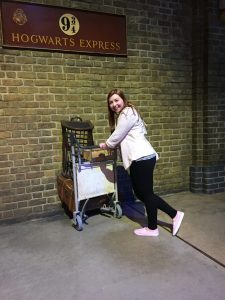 ld loose them and that would be it for the boys having their photo taken riding a broomstick (spoiler alert, I didn’t loose them). After this we moved on to the new forbidden forest and I was lucky in my group because none of the boys were scared of spiders or to go into this area of the tour. They were all extremely polite and I really did realize that I could completely trust them to run around to look at the sculptures and take photos without bothering any of the other people on their own tours. The boys were so kind, they even insisted taking photos of me with things, which I didn’t say no to, because how often do you get to go to Harry Potter studios!

Lunch was brought with us on the coach and was a delicious decision between pizza slices and sausage rolls. I am sure that I have said before that I love the food here at Moulsford. But I mean it. I LOVE THE FOOD HERE. We ate our lunch outside in front of Privit Drive and the Night-bus as a group as we had all managed to find each other again and the boys were walking around all of the outdoor bits walking in and out of houses exploring. They really seemed to enjoy it with big beaming smiles on their faces and after a 5 minute warning we were off again on the next bit of the tour. 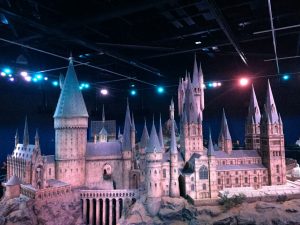 The anamatronics were amazing and so was Diagon Alley, but nothing at all could ever prepare me for the overwhelming feeling I got from seeing the Hogwarts Castle structure up close for the first time in my life. I was slightly teary to say the least to see something that had been with me from my childhood and I could tell that the children were mesmerized by it as well because we were in the room for ages and the boys were just constantly looking and intrigued by this incredible sculpture. It was amazing, and a feeling I doubt I will ever get back again in my lifetime, but it did make me think about the reason I was here and the amazing experience the boys were having on this trip. They were so lucky to go because not only is it a difficult place to get to for most schools, it is also something expensive. There were other schools there at the same time as us but I wounder how many of them were state schools, and how many state schools can actually afford trips like that?

Although the trip ended on a high, there was a lot of hilarity at the end of the day when we realized we had forgotten the packed lunches which hadn’t been eaten and had to send someone to go and get them back. This showed me that you can plan every last detail of a trip, but nearly always, something is bound to go wrong. Moreover, I went back to the Year 4 classes the next day where they were all writing about their experience and putting that creative writing experience to use. I helped the same boy I have been helping for a couple of weeks now, and it was really lovely to see that he completely loved his day and wanted to go back. He wrote down his top 3 favorite things with a little help from me with the scribing part, but everything I wrote were his own words. A copy of this is in my folio. Overall, I truly feel that I have learnt something new from this experience, and no that isn’t how to ride a broomstick although that may come in handy someday. I have learnt that if you want to take children out on a school trip you need to trust them to be able to walk round the place of their own accord and they will in turn respect the trust you give them and come back at the times they are asked. 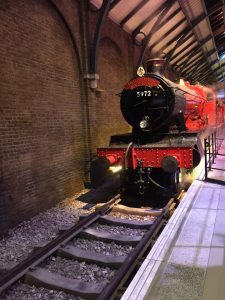