Wow, what a long time since my last post. I’ve had an awfully busy summer working 2 jobs in my home village in preparation for my second year at the University of Dundee studying Primary Teaching. Although the majority of my summer holidays were taken up with work I managed to have the odd day off where I went to the cinema (on that subject I would highly recommend going to see Finding Dory and BFG) or grabbed a short break down at my nanny’s. But, best of all and definitely the highlight of my summer was travelling 60 miles on the 31st of July to the nearest book shop (yes, I live in the middle of nowhere) to grab the highly anticipated next instalment in the “Harry Potter” series. YES, “Harry Potter and the Cursed Child” took over the bookshops this summer and definitely the majority of my august reading it. This is a series which ever since going to see the first film for my 5th birthday completely took over my life and as I’m sure you can tell, still does.

Being the daughter of a mother who loves to read she won’t mind me telling you she was slightly upset (devastated) when I had no ambitions to read and much preferred to cuddle up on the sofa to watch the football or a film, rather than a good book. I was read to from an early age and my vast collection of story tapes would send me to sleep but the one thing that I refused to bother with was a book. This carried on into my teenage years, where I won’t even get into the battle my English teachers had with me to get me to read the curriculum set books. I simply wasn’t interested until my 5th year English teacher said to me that it didn’t matter what I read as long as I enjoyed it. That was when the “Harry Potter” books thanks to my English teacher changed my mind. I would read those books until the early hours of the morning and the spines were so split pages were falling out. Because of him and his advice, I am now an avid reader, reading for pleasure as well as for university. However, many people would not agree with my teacher, but would say that the series that inspired me to read more isn’t proper literacy and is silly stories set for little children.

Just over a quarter of 35,000 children from 188 schools in the UK told the National Literacy Trust that they read outside of school in 2013 according to this BBC article. To me this is a scary prospect especially with the huge number of developments trying to encourage children to read such as book bug and the summer reading challenge. So as teachers shouldn’t we be encouraging the love of reading no matter what the book? One teacher who certainly embraced their love for the series in Imgur user, Entopop, who transformed their classroom into a “Harry Potter” classroom. With figurines, banners and candles all around I am sure some children in that classroom will be inspired to read the books (see pictures here).

Jeffrey Canton in the Washington Post compares the work by J.K.Rowling to other works like Alice in Wonderland and says that he finds it lacking in craft. Others in this article agree and some say that it has been written poorly and the later books are far too long for what the books really contain. Although I’m bias because I love the series, one quote that often sticks in my mind is Philip Womacks in the telegraph from 2012. “It’s written awkwardly and is clumsy in places – although it does tell the story well. And it lacks subtlety. Even Professor Snape, who is meant to be complex, is so obvious.” Womack in this quote has nothing positive to say except that the story is told well and in my eyes, I get the impression that Womack forgets that Rowling wrote and published this story for children not for it to become a piece of classic literacy. 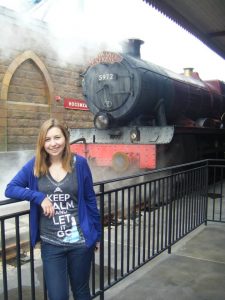 “Harry Potter” was never supposed to be a classic and whether you love it or loath it, is a fictional story loved by children and adults across the world which a whole generation grew up with. A theme park has dedicated a section to it, which I myself have visited and loved and the series of films and books bring in billions of pounds each year. Every year more and more children pick up the “Harry Potter” series, start it and find their love of reading. This post wasn’t written to prove anything or be an academic piece of writing but the question of whether we as teachers should encourage the “Harry Potter” series as reading is just something which has been playing on my mind over the summer since the new book came out. Whatever your view, I’m sure by now you have realised that I agree with my 5th year English teacher and think no matter what the book is or the content, if a child gets something out of it and it gives them the will to read a wider range of books we should encourage them, whatever it takes, to read. I am just one child who found the “magic” of reading a book in “Harry Potter” and certainly won’t be the last.

5 thoughts on “Can all books encourage learning?”