It has been said by many that animals in fact have the ability to count, however in the 1980’s Wilhelm von Osten was said to have taught his horse Hans how to count. Hans was able to stamp his hoof in order to answer questions such as basic addition and subtraction to multiplication and division. Hans and his owner would perform all over Germany and amaze hundreds of viewers with his mathematical ability. 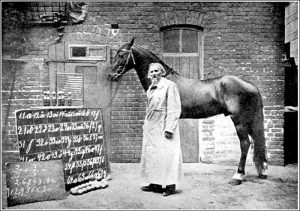 After investigation it was discovered that in fact Hans could not count and instead was reacting to non-verbal hints from the person who was questioning him. It was also found that Hans could only answer the question correctly if the questioner knew the answer. This has caused scientists now to believe that animals cannot count but this may not be the case.

Scientists later carried out a study involving ants, researchers took some ants and cut their legs to make them shorter and stuck some matchsticks onto others. the ants with shorter legs stopped walking before they made it home and those with longer legs walked past their homes. This suggesting that the ants could in fact count the amount of steps it took for them to reach their home. So can animals count? the question still remains.