Since coming to New Zealand, a real highlight has been learning about Maori people and their ancient traditions. Everyday children sing songs, recite the Lords Prayer and listen to simple commands in Maori and I absolutely love it! Any time we drive past a sign with an interesting name I (attempt) to pronounce it and I must admit, I’m proud to say that I’m slowly getting better. But what’s even more exciting is the story I learned today in school. This term the children have been learning all about the biblical story of Creation and this has generally been incorporated into at least one lesson a week. However today, Mrs Jackson told us a version of the ancient Maori story of how the earth came to be as it is now. Due to the fact that these tales have been spoken and repeated through hundreds of generations, each Maori tribe tells the story of creation slightly differently. Despite this, apparently most stories describe the movement from Te Kore (nothingness) to something, and from Te Pō (darkness) to Te Ao (light). The separation of the earth and sky is always a key feature in the different tribes stories, as is the talk of how the gods were responsible for making the natural world.

In the beginning Ranginui (the sky father) and Papatūānuku (the mother earth) were joined together in an eternal hug, and their children were born between them in darkness. The children wanted light and warmth and beauty to grow on Earth and so decided to separate their parents, to allow light to come into the world. Each child, a demi-god of the natural world, attempted to separate their parents but not one of them could manage. Well, not until Tāne, the god of forests and all that live inside them, used his mighty strength to push his father up and to hold his mother down. However despite his success in fulfilling the children’s plan, he didn’t want his mother and father to be sad or lonely without each other. So to keep them company, he planted beautiful trees, flowers and bushes for his mother (Papatūānuku) to enjoy. Then he gave his father (Ranginui) the moon and the stars to keep him company. 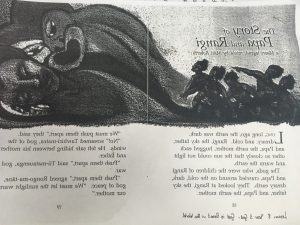 Excerpt from the version of the story told by Mrs Jackson 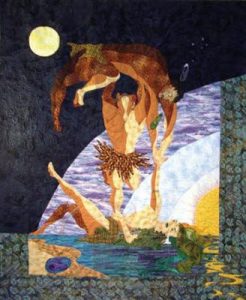 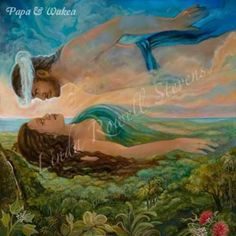 After looking into this in further detail, I found lots of really helpful websites that deepened my understanding, and my interest! For example, here’s an excerpt written by Mr John Waititi, who is well known for his work with Maori people in Auckland. He is at present Maori language officer to the Education Department.

“Then Tawhiri, the god and father of hurricanes and storms, was angry with his brothers, because against his wishes they had torn apart Rangi and Papa, and he was afraid that the world would now be too pleasant and beautiful. Because of this he followed his father Rangi to the sky above; and from there he sends the earth mighty winds, dense clouds, dark thick clouds, fiery red clouds, clouds of thunder storms, and clouds swiftly flying. In the midst of these Tawhiri himself sweeps wildly on, and makes war against the creatures that live on the earth.

But in spite of the evil rage of Tawhiri, the human beings who had been hidden between Rangi and Papa increased in number now, and flourished upon the earth; and it is from these first men that we are all descended.

And through all this time the vast sky has not ceased to mourn the loss of his wife the earth. Often in the long nights he weeps, and drops upon her breast those tears which men call dew. And often the loving sighs of Papa go up towards the sky; and when men see these, they call them mists.” (…for more, see http://teaohou.natlib.govt.nz/journals/teaohou/issue/Mao45TeA/c11.html)

And for even more information, see: http://www.teara.govt.nz/en/maori-creation-traditions