Languages. We all have one but should we just stop at that?

I believe that as teachers, we would be depriving our pupils if we did not incorporate other languages of the world into our classroom. It is ever more apparent that these days huge numbers of people do not just live in the country of their birth for their entire life. So are we really equipping the children with the basic fundamentals for life if we do not grant foreign languages with a high level of importance within the classroom?

I was fortunate enough to spend time and live with Spanish students for three weeks in Edinburgh whilst they visited Scotland. I was there to teach and improve their English. In the morning they went to language school and then spent the afternoons and evenings with us- sight seeing, playing games in the park and going shopping. Whilst all the time speaking in English.  Many a time we faced difficulties where nor one or the other could understand what the other was trying to say. Which as you could imagine could be extremely frustrating! However we always got there in the end!

The thing that made this extremely difficult was the fact that I cannot speak Spanish. I could sing you the odd Spanish song from past experiences of strutting my stuff on the dance floor to them, but no where near what was needed to have a conversation! If I had been able to speak their language fluently it would have been all to easy for us to just start communicating in Spanish when they got tired of English, completely defeating the main purpose of their visit!

Speaking a second language for a long period of time can be exhausting and witnessing that first hand of the students I was with made me truly respect and appreciate what they were doing.  Many of these young people spoke more than just the two languages. When I asked why,  they explained that by having a knowledge of other languages it opens up job opportunities all round the world for them. It would enable them to travel the world to see and experience all the different cultures we have. They believe that it’s only fair that if you travel to somewhere new, you as the guest, should make the effort to know at least some of the native language.

I love to travel. Especially as I lived in Germany when I was younger I love exploring new places!  Personally, I believe it’s really important for children to have a passion and desire to want to know about the world they live in and the people living in it. Many families cannot afford to take their children abroad so as a teacher it would be my wish to bring those countries into the classroom. We don’t necessarily need an aeroplane or boat to raise awareness of the outside world to children. We just need creativeness, imagination and passion. I want to ensure that any future pupil of mine leaves my classroom having a good idea of what living in another culture would be like and for them to have the desire to maybe visit that country in the future. I want them to know phrases of languages which could then be built on as they get older and used all around the world!

This country is a great place to live but when there is so much more greatness to see, let’s not shy our children away from that. Encourage exploring. It’s a bit like trial and error- you have to try things to see if you like them. You have to try new things to learn and as teachers we are there to facilitate that learning.

Get your backpacks on, we’re going on a round the world trip..classroom style! 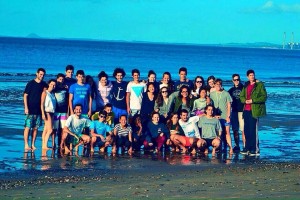 After a lovely day at Portobello beach in Edinburgh with my lovely Spanish and English speaking friends!

For those of you who are not big music fans, don’t worry I’m not away to turn into some sort of super geeky band nerd! I just wanted to share this story to make those who are feeling a bit apprehensive about teaching music in their class not alone!

“You’re going to the Albert Hall!!” was the only thing I remembered from that band practice three years ago. The BBC Youth Proms wanted us to play in their concert? Surely not? But yes! Yes they did..

I’ve been playing brass since primary 5 and I was by no means a musical god that’s for sure! I didn’t let that stop me however! In my second year at high school my brass teacher asked me if I wanted to join the Carnoustie and District Youth Brass Band. I live in Carnoustie, which is a rather small place but every member, bar a few, come from the town- something quite unusual in the world of brass bands. We were also all taught by the same instructor- again something very unique. I knew the band was for competition purposes so thought that I’d give it a try and see what it would be like. If only I knew where that would lead..

Most bands are around for years and years before they enjoy competition success. We were exceptionally fortunate and only took four. Before I knew it we had won British and Scottish championship titles more than once and were winning awards from the likes of the BBC. It was a complete whirlwind experience! Unknown to us, something even better was waiting around the corner!

Playing live on stage to 5,000 people in the Royal Albert Hall is something I cant quite explain. Being washed with the overwhelming sound of applause vibrating the stage under your feet is something you just don’t forget. None of us could believe that we had somehow made it here. Yes, we had put in hours upon hours of rehearsing, blood, sweat and tears. When I say tears, I mean serious tears!

You would think that this would mean I’m probably quite confident about standing in front of a class and delivering a music lesson, but not quite.  After all these years I have developed my own way of interpreting music and my own way of learning it. So now I need to develop all of that into a way that a child will understand and can use later in life.  In some respect I need to go back and relearn music! Which is actually a rather daunting thought! I can’t be selfish and demand that it is my way of learning music and that’s it! No, I have to consider what will be best for the children I will be teaching. I have to think of ways to keep those who enjoy music interested and those who don’t, enthusiastic about it! I have had my opportunity to get specialised help but now it’s time for me to pass some of that knowledge on so that future children can benefit from music like I did.  Music is a brilliant way to let children express themselves and liven up their learning! No child should be deprived of the chance to experience what music can mean and do for them.

Music gave me friends, a sense of teamwork, discipline and an understanding of what it feels like to be rewarded for hard work. Without it I don’t think I would be at University today. This is why I feel music is such an important part of the curriculum and can be done so in a variety of different ways.

Let’s get music into those classrooms!

If you fancy a listen, below was part of our performance in the 2012 British Youth Championships, which we were lucky enough to come 1st, giving us the title of Best Youth band in Britain.  All the players are aged 12-21! I’m experiencing a rather bad hair day in the video..I’ll blame the nerves!

The last minute or so is my favourite!