We use methodology to take account of the value of things and this methodology is using number systems. Number systems provide symbols which represent digits which symbolise the value. This may seem confusing, but bare with me.

The terminology available to describe numbers, counting, digits or mathematical values, proves to be of a broad essence.

So, it appears that numerals are symbols which represent the value, which fundamentally, is a number. Each symbol denotes a digit and looks something like: 0, 1, 2, 3, 4, 5, 6, 7, 9… (do bare in mind that number symbols do not look like this in particular countries… For example, have a look at the number symbols in the Chinese language).

How old are you, numeral?

Roman numerals is a number system going back to 3500bce, which makes it 5500 years old.
However, number sequences are suggestively not the same age. Take a look…

This is the Ishango Bone is a mathematical resource, a ‘tool’ if you like, which was used to make tally marks to keep count. It is 22, 000 years old and in its original use, it did the job for people tracking environmental occurences, such as the factors indicating season changes, or light and dark weather. Today, clocks tell us the time and so if it is 11pm, we know, without looking outside, there will be a dark sky. Vice versa, if it is a dark sky outside, we will know, without checking the time, it will be somewhat late in the evening. Back when the Ishango Bone was used, there were no clocks to distinguish the time – the hours, days, weeks, months and seasons going by. 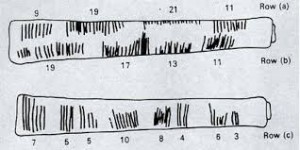 Tally marks were notched into the bone to count or symbolise the number value. For example, one line = 1, two lines = 2, three lines = 3, and so on – each line is one  tally mark. Amazing, isn’t it?

Back to Roman Numerals

Perhaps Roman numerals is an easier way to educate learners about what a ‘numeral’ actually is, because Roman numerals, apart from the numerals we use today, are well known, so much so that they are still used on clock faces. 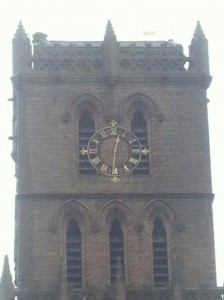 Here is an example of this! Roman numerals on the clock at The Steeple Church, Dundee. This picture was taken by myself.
These are fundamental elements in maths – number recognition, counting, values and number
systems. Yet, it is so astonishing how number systems have evolved throughout the years of
maths going on, almost in a subconscious behaviour. I mean, when people used the Ishango

Bone, did they have the understanding they were using mathematics and, more amazingly, they

were practising and demonstrating an understanding of fundamental mathematics?