Imagine an unimaginable imagination. One that no teacher, educator, facilitator, parent, caregiver or learner sets expectations for, standardises for, or… imagines.

“We want our classrooms to be just and caring, full of various conceptions of the good. We want them to be articulate, with the dialogue involving as many persons as possible, opening up to one another and to the world. We also want our students to be concerned for one another as we learn to be concerned for them. We want them to achieve friendships among one another as they move to a heightened sense of craft and wide-awakeness and a renewed consciousness of worth and possibility.”

Following an input in Education Studies: Historical and Comparative Perspectives on Education module, I thought about this quote from Greene and I reflected on what it means to be in a classroom. What is our purpose of schooling? What is the need to teach such human traits as to be caring, respectful and open-minded? I argue that it is to broaden the mind of our learners. To allow them to visualise, to imagine their potential and teach them the skills they need to turn that imagination into a reality. Schooling is to support and encourage our learners in becoming well-rounded individuals.
I analysed this quote from Maxine Green and recorded a few key points I interpreted from it: 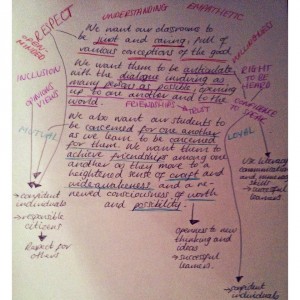 Many of the traits Maxine Green talks about in the above statement, I interpret to making a number of links to the Curriculum for Excellence (2009), and in particular, the four capacities: successful learners, confident individuals, responsible citizens and effective contributors.

This just highlights to me that even though Maxine Green does not base her work in Scotland, around our Scottish Curriculum, based on our learners, our expectations and our way of working in schools, the idea and the imagination and thoughts are still on the same wavelength. We want our learners to achieve potential, bring their own views and to have the confidence to express them. Most importantly, for our learners to have an awareness and an imagination for what is possible.

In response to Greene’s statement, she is talking about creating an ethos and an influential environment in classrooms and amongst children as learners and individuals – one that demonstrates respect, appreciates friendships and understands voices and opinions. I strongly agree with what Greene pushes for by saying this, as she shows understanding of the profound importance of capturing the essence of the holistic child.

Scottish Government (no date) Education Scotland: The purpose of the curriculum: The four capacities. Available at:
http://www.educationscotland.gov.uk/learningandteaching/thecurriculum/whatiscurriculumforexcellence/thepurposeofthecurriculum/. Last Accessed: Nov 17 2015.