Who knew something so simple as making pictures out of leaves, twigs and other natural resources can make you think so much?!?

In our most recent expressive arts module we learned about the artist Andy Goldsworthy and his passion for art in nature otherwise known as Ephemeral art. Goldsworthy’s work was always transient so would not last very long, this is because he uses only natural resources. This, however, meant that his work could only be documented through his use of photographs. 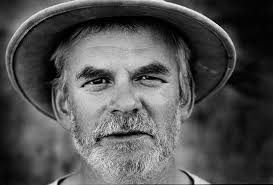 Goldsworthy had an obsession with shape, line, texture, form and colour and would express this through his work. 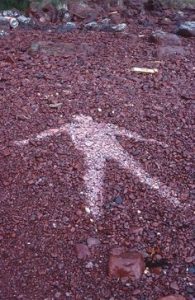 This piece of Goldsworthy’s was one which we took forward as a group to try to recreate. This piece really captures just how impermanent his work really was.

This piece was created by Goldsworthy, himself, laying on the dry surface in the rain only to move himself when the rain had passed to leave his silhouette printed on the surface.

When  trying to decipher the meaning of this piece, we struggled but  came to the conclusion that it represents the short nature of life itself.

In this tutorial, we formed a group of 3 and tried out some of our own ephemeral art pieces. First we stared by gathering leaves and grouping leaves together by colour. Then we tried finding some sticks to use before deciding on what our project would be. 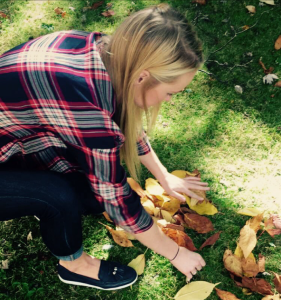 Next we had a discussion about what we could try and make. Me, I am nothing close to being an artist and you would struggle to find an artistic bone in my body. However, this task was easier (and more enjoyable) than first thought.

We then decided on our first project… the human outline made entirely from leaves… which wasn’t entirely our idea (although we’d love to take credit) but a take on one of Goldsworthy’s pieces pictured previously. We had Kirsty lie on the ground while the two of us laid leaves all around her. 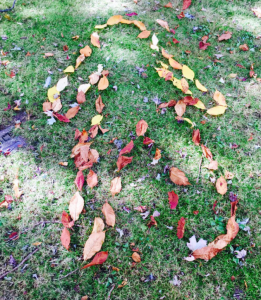 The meaning of this was, like our interpretation of Goldsworthy’s piece, was to show that life does not last long.The fact that the wind could blow away at anytime represents this.

As well as this, we also were careful to use colours which fade downwards. This was to show the developments we make in our lives and the changes and choices we have to make and go through every single day. The way in which we grow as people are also represented in the leaves.

Finally our last original piece we created was a large tree.

This piece was one we made to reflect the changing of the seasons we felt like the colour of leaves were correct to show the time of year. As well as this we also thought this represents the passing of time, through the seasons and our time through this university course also.

This task would be simple and effective to recreate in a class of pupils. I also feel like the children would benefit from this artistic activity with being given extra time outside to explore their own surroundings… putting safety first of course!