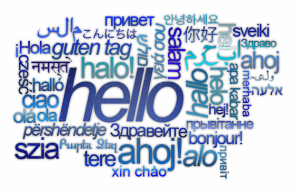 Languages are  wonderful and diverse and according to the website ethnologue there are 7,102 known living languages in the world. This made me smile to myself. Then I realised that I only really knew smatterings of phrases from a mere 7 of those and could really only converse in perhaps 4 of them!

Unfortunately there has been a decline and 367 such languages are now recorded as being extinct. This can of course be due to several reasons. Due to migration and social movement speakers of smaller less known languages swap their native tongue for a more dominant language in order to enable them to integrate into a differing society. Inter generational transmission of heritage languages may cease as the social world around them changes. The needs of commerce and business become greater and as a consequence some languages become extinct or dormant only remaining as recordings in an archive. In the UK alone we have 13 living languages… This shows the diversity of our country as a whole. Of course there are several dialects that can be thrown in there as well but lets leave that for another post !

Table 1. Distribution of world languages by area of origin

This leads me onto to discussing the new 1+2  language policy currently being implemented in Scottish Education with the hope that full implementation will be complete by 2020. This policy outlines the need for our learners to “…communicate effectively in social, academic and commercial settings is crucial if they are to play their full part as global citizens.” (Education Scotland, no date)

As a nation we are particularly lazy when it comes to the acquisition of a new language. Partly to blame, in my opinion, is there has never been the “need” before. People holidaying in countries such as Spain, France, Italy and Turkey found that the locals spoke English so therefore there was no need to learn. A notion to consider is that perhaps it derives from snobbery, we as a nation perhaps expect everyone to speak English as a rule of thumb. Surprisingly though the language that is most widely spoken in the world is  not, in fact, English but Chinese… There was a slight buzz in education a few years back where Mandarin was being talked about in schools, this did not amount to much at the time but it makes complete sense now in terms of developing our future workforce. A lot of trade and business is and will continue to be carried out with China and other countries that speak Mandarin and it would serve us well to be able to converse in their native tongue.

My initial view of the 1+2 approach was favorable until I started to read a little more around it. Whilst I do not fully disagree with the policy I am increasingly disheartened that it seems a little complicated in terms of deliverance. Of course at first glance it appears relatively straight forward. Children will have their mother tongue and in P1 they will commence with the learning of L2 then at P5 they will then start learning L3. Easy right.

We know that young children have the ability to absorb copious amounts of information (retaining it is subject matter for another post! ) and particularly language so it makes sense to start early. A psychology department of a Swedish University conducted a study that showed that learning a second language increased brain growth!

Embedding  MFL in the curriculum and in practice, in theory, is both beneficial and makes complete sense in terms of future economic growth and development. After all we are preparing our children for the future workforce…

I propose looking at this in a slightly different way.

Say, for example we have an Algerian child whose first language is not English nor is it Arabic or French but a blend of the last two languages. We have to, of course, recognise and celebrate their native language as their L1. We then have to introduce them to L2  which for sake of argument shall be German then a short time later L3 is introduced, perhaps Spanish. At this point this child whose L1 is not English has knowledge of German , Spanish, English, French and Arabic and of course their native tongue, Algerian. Phew…. that is a Whopping 6 languages.just to be clear here is the list :

We should of course be looking at it from the point of view that their native tongue is L1, English therefore should be L2 …but then where do we fit in German not to mention Spanish??  Just to add another Spanner to the proverbial mix, Lets look at the Scots Language policy that has recently been introduced!  In the  Principles and Practice document, Literacy and English (2009) of Curriculum for Excellence, it states that ‘the languages, dialects and literature of Scotland provide a rich resource for children and young people to learn about Scotland’s culture, identity and language. Through engaging with a wide range of texts they will develop an appreciation of Scotland’s vibrant literary and linguistic heritage and its indigenous languages and dialects. This principle suffuses the experiences and outcomes and it is expected that practitioners will build upon the diversity of language represented within the communities of Scotland, valuing the languages which children and young people bring to school.’  (Education Scotland, P4) Now where exactly are we to fit in what could effectively be language number 7 for this particular child…

I shall let you ponder over that for a time.

Education Scotland. (No Date) A 1+2 approach to modern language [online] available from: http://www.educationscotland.gov.uk/learningandteaching/curriculumareas/languages/modernlanguages/supportmaterials/1plus2approachtomodernlanguages/introduction.asp