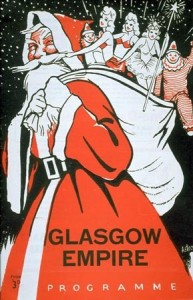 Santa Claus (also known as Saint Nicholas, Saint Nick, Father Christmas, Kris Kringle, Santy or simply Santa) is a folk hero in various cultures who distributes gifts to children, traditionally on Christmas Eve. Each name is a variation of Saint Nicholas, but refers to Santa Claus.

In popular mythology, Santa lives at the North Pole – or in Lapland. Many children write letters to Santa each year revealing what they would like to receive as gifts. It is also usual to leave a treat for Santa and his reindeers on Christmas Eve. It can be quite exhausting getting down all those chimneys! 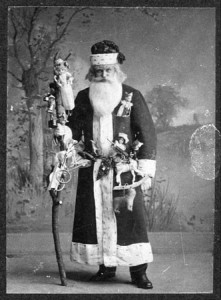 Santa derives from European folk tales based on the historical figure Saint Nicholas, a bishop from present-day Turkey, who gave presents to the poor. This inspired the mythical figure of Sinterklaas, the subject of a major celebration in the Netherlands and Belgium (where his alleged birthday is celebrated), which in turn inspired both the myth and the name of Santa Claus.

In many Eastern Orthodox traditions, Santa Claus visits children on New Year’s Day and is identified with Saint Basil whose memory is celebrated on that day.

Depictions of Santa Claus also have a close relationship with the Russian character of Ded Moroz (“Grandfather Frost”). He delivers presents to children and has a red coat, fur boots and long white beard. Much of the iconography of Santa Claus could be seen to derive from Russian traditions of Ded Moroz, particularly transmitted into western European culture through his German folklore equivalent, Väterchen Frost.

Development of the Santa Image 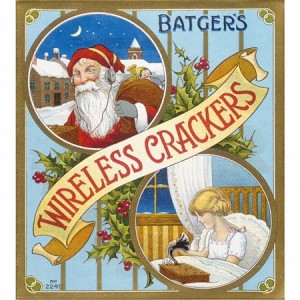 The plump figure in the fur trimmed suit is a relatively recent image developed through the 19th Century.

In 1809, Washington Irving published A History of New York, by “Diedrich Knickerbocker,” a work that poked fun at New York’s Dutch past (St. Nicholas included). Irving revised his History of New York in 1812, adding details about Nicholas “riding over the tops of the trees, in that self same waggon wherein he brings his yearly presents to children.” In 1821, a New York printer named William Gilley issued a poem about a “Santeclaus” who dressed all in fur and drove a sleigh pulled by one reindeer.

On Christmas Eve of 1822, another New Yorker, Clement Clarke Moore, wrote down and read to his children a series of verses; his poem was published a year later as “An Account of a Visit from St. Nicholas”. This is the first naming of Santa’s reindeers and one of the first published accounts of access by chimney. It also sets the tone of a fat, jolly figure.

‘Twas the Night Before Christmas

‘Twas the night before Christmas, when all through the house
Not a creature was stirring, not even a mouse.
The stockings were hung by the chimney with care,
In hopes that St Nicholas soon would be there.

The children were nestled all snug in their beds,
While visions of sugar-plums danced in their heads.
And mamma in her ‘kerchief, and I in my cap,
Had just settled our brains for a long winter’s nap.

When out on the lawn there arose such a clatter,
I sprang from the bed to see what was the matter.
Away to the window I flew like a flash,
Tore open the shutters and threw up the sash.

The moon on the breast of the new-fallen snow
Gave the lustre of mid-day to objects below.
When, what to my wondering eyes should appear,
But a miniature sleigh, and eight tiny reindeer.

With a little old driver, so lively and quick,
I knew in a moment it must be St Nick.
More rapid than eagles his coursers they came,
And he whistled, and shouted, and called them by name!

As dry leaves that before the wild hurricane fly,
When they meet with an obstacle, mount to the sky.
So up to the house-top the coursers they flew,
With the sleigh full of Toys, and St Nicholas too.

And then, in a twinkling, I heard on the roof
The prancing and pawing of each little hoof.
As I drew in my head, and was turning around,
Down the chimney St Nicholas came with a bound.

He was dressed all in fur, from his head to his foot,
And his clothes were all tarnished with ashes and soot.
A bundle of Toys he had flung on his back,
And he looked like a peddler, just opening his pack.

His eyes-how they twinkled! his dimples how merry!
His cheeks were like roses, his nose like a cherry!
His droll little mouth was drawn up like a bow,
And the beard of his chin was as white as the snow.

The stump of a pipe he held tight in his teeth,
And the smoke it encircled his head like a wreath.
He had a broad face and a little round belly,
That shook when he laughed, like a bowlful of jelly!

He was chubby and plump, a right jolly old elf,
And I laughed when I saw him, in spite of myself!
A wink of his eye and a twist of his head,
Soon gave me to know I had nothing to dread.

He spoke not a word, but went straight to his work,
And filled all the stockings, then turned with a jerk.
And laying his finger aside of his nose,
And giving a nod, up the chimney he rose!

He sprang to his sleigh, to his team gave a whistle,
And away they all flew like the down of a thistle.
But I heard him exclaim, ‘ere he drove out of sight,
“Happy Christmas to all, and to all a good-night!” 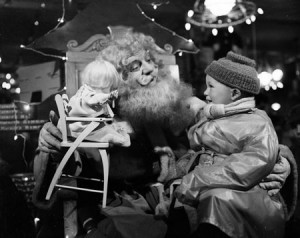 In 1863, Thomas Nast – a caricaturist for Harper’s Weekly – developed his own image of Santa. Nast drew his figure with a “flowing set of whiskers” and “all in fur, from his head to his foot.” Nast drew Santa in many sizes from miniature to large. His 1881 “Merry Old Santa Claus” drawing is close to the modern-day image.

Thus, the Santa Claus figure we know today, although not yet standardized in size perhaps presciently to allow chimney access, was everywhere by the late 19th century. At the beginning of the 1930s, the Coca-Cola company wanted to increase sales during winter. An illustrator named Haddon Sundblom created the figure of a larger than life, red-and-white garbed Santa Claus for them. And since then, illustrations have followed the formula of a larger than life, rotund, red-suited, bewhiskered jolly man.