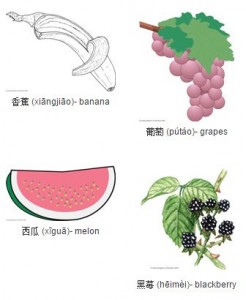 China is undoubtedly going to become an increasingly important trading and cultural partner for the West in the coming decades, and a rudimentary knowledge of Chinese may soon be as important as being able to say “la plume de ma tante” was to previous generations. With much help from the Confucius Institute in Glasgow (in particular Natasha and Hongyu), we’ve put together some Pathfinders featuring basic Chinese vocabulary for numbers, colours, weather, clothes, food etc. that teachers and pupils can use and adapt. The Pathfinder on Chinese colours, by way of example, is here, and there are links to the others at the foot of the Pathfinder.

We also have many similar Pathfinders for other modern foreign languages, including French, German and Italian, as well as Swedish and Japanese! And if you want to go beyond the basics, click Create under any of the images on Scran, and you can insert your choice of words into an easy-to-make document such as a worksheet or poster.  The Create tool accepts European foreign language inputs, including umlauts (ö), cedillas (ç), circumflexes (ô) and other European diacritical marks. So every picture on Scran is potentially a modern foreign language teaching resource! There’s a guide to inputting special characters here, but if you have an iPad or similar tablet, it’s even easier.