Our hard-working colleagues in the Scots Language department of Education Scotland have just unveiled their new “hub”, offering links to Scots language resources, guides to how to use Scots within the English language and literacy curriculum, and a history of the Scots language among other goodies. You can find the hub here. The team also run the Scots language “Blether” on Glow, and you can see this at http://bit.ly/scotsblether 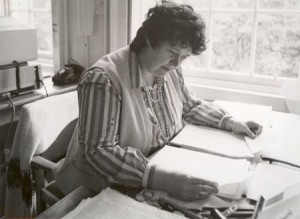 The Scran image shown here, incidentally, is of Mairi Robinson. Under Mairi’s editorship the Scottish National Dictionary and the Dictionary of the Older Scottish Tongue were updated and combined to form the Concise Scots Dictionary. It was first published in 1985 by Aberdeen University Press. In 1987, a revised edition of 820 pages was published. The dictionary contains words used from the twelfth century to the present, with meanings, pronunciations and origins included.