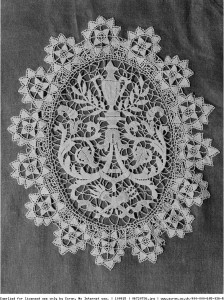 You may have read our blog post last week Empowering Communities in Cyprus? Well look what we found at the back of the Scran linen cupboard! It’s a piece of Cypriot lace in the form of a table mat, from around 1935. This beautiful sample forms part of the National Museums of Scotland (NMS) collections shared via Scran.

The Needlework Development Scheme was set up in 1934 to encourage greater interest in embroidery and to raise the standard of design. Financed anonymously by J & P Coats, the intention was also to form a collection of British and foreign embroideries to which colleges of art and other institutions could have access. The aim was never to have a representative collection but rather to collect items purely on the quality of their design. A series of four embroidery experts were employed to oversee the collection and their international outlook is clearly represented in the collection.

In 1961 the Scheme was disbanded and its collection of over 3500 pieces of historic and contemporary needlework was dispersed to various museums and art colleges in Britain. The Royal Scottish Museum acquired 213 pieces and an exhibition was held in 1965 to show this magnificent gift.