Maths and Sport have very strong links, most of which I had no idea even existed until our input on the subject and further research afterwards.

One very obvious link between the two is the use of different scoring systems in various sports. Some scoring systems are quite simple such as the one used in football- each goal scored by a team is counted as one and at the end of the game the team with the highest number of goals win the game. Other scoring systems such as the one used in tennis is a little more complex, in a game of tennis the scoring system usually consists of points, games and sets. All three link as you have to accumulate points to win games and accumulate games to win sets. Although slightly more complex maths is used in the scoring system for tennis than in games like football, maths is always at the heart of sports and is vital to ensure that the running of games is efficient.

John Barrow, a professor of mathematical sciences researches many different ways in which maths and sport are related and links these to particular formulas and even has mathematical theories in which it can be determined which events are the easiest to score in when participating in a decathlon.

The video below explains some of the links between sport and mathematics, examples being fluid dynamics being used to tailor and design swimsuits and a maths model being made to determine whether there is actually a limit to how much an athlete can push themselves. The main point that I have taken from this particular video is just how much mathematics is involved in the design and manufacture of sporting venues. Routes and structures are carefully analysed by mathematicians to ensure that the building/stadium etc can withstand its purpose, maths is also used to ensure that the structure can withstand various weather conditions including rain, wind and snow. Maths is used not only to predict what the needs are for the building, but also to predict the behaviour of the people who will be inside the building to ensure not only that the structure is appropriately designed for purpose but also that it is safe.

In our maths and sport input, we decided to look at the rules and the sport of taekwondo and how maths comes into the sport and how we can adapt the sport in relation to the maths involved. In taekwondo a game consists of three 2 minute rounds with a break of 1 minute between each round and the contest area is a 10m square mat. Like most sports, the game can be won by scoring the most points. The scoring system in taekwondo is fairly simple and does not involve complex mathematics- one point is scored for a strike to the body and two points are scored for a kick in the head. Another mathematical link to the sport is the weight divisions in use. By dividing people into categories depending on weight this allows the competition to work more fairly and allow competitors to have an equal chance at victory.

We, as a group decided to take the maths involved in taekwondo and adapt it to create our own version of the sport. We decided firstly to focus on the actual design of the ring the sport is played in, we suggested decreasing the size of the ring after every round- this means that the competitors will have less space and so the competition would gradually become more difficult at the beginning of each new round. We also decided that we would introduce a height division as well as the weight division that is already in place. This would again, ensure a fairer fight if the competitors were more mathematically matched in terms of their height as well as their weight. 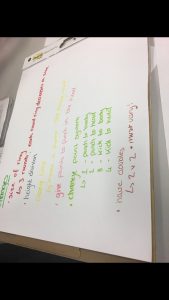 Now that I am much more aware of the links between maths and sport I will now take my knowledge forward and hope to share this knowledge with the children I will teach in the future, in this way those who perhaps feel like maths isn’t a subject for them may find alternative ways to engage with the subject through other subject areas which may be of more interest to them.

Read my blog in any language