Today’s session involved learning about programmable toys and, in particular, Bee-Bots. We looked at the history of programmable toys, the benefits of using them in the classroom and the links to the Curriculum for Excellence.

Programmable toys being used in the education system dates back to the 1960s when the programming language Logo was created by Seymour Papert. This involves controlling the ‘turtle’ (arrow) to draw lines on the computer screen. We were able to give this a try in class today – it was really interesting to use and find similarities between this and the Bee-Bot. We also got the chance to use the Bee-Bot app on the iPads – this is a great tool to use in schools that might not have the physical Bee-Bots.

The benefits of programmable toys are seemingly endless: Janka (2008) claims that these types of toys are “a good example for developing knowledge and understanding of the contemporary world”. Janka (2008) also states that programmable toys help children to “develop the ability to describe simple journey and instruct the programmable toy in order to develop positional language and estimation.” Lydon (2008) claims that children “gained independence faster than anticipated” when using Bee-Bots. The benefits are inter-disciplinary: The National centre for Technology in Education (2012) say that floor robots such as Bee-Bots help with “development of skills such as logical sequencing, measuring, comparing lengths, space orientation, and expressing concepts in words.” Other benefits include: there is instant feedback gained by the learner; their problem solving skills are developed; it is a hands-on lesson; the pupils experience challenge and enjoyment; the learner is in control and has the platform to be creative.

I found it really interesting to think about all the different ways these toys could be used in the classroom to support a vast range of learning. When using programmable toys, it is important to keep in mind the Curriculum for Excellence Experiences and Outcomes (Es&Os). To ensure that the child is receiving the most from the lesson, a teacher should make sure the lesson is targeting at least one or two of the Es&Os, if not more. Es&Os should be the bones of a good lesson, and the success criteria should be made clear to the pupils at the start and end of the lesson.

As a class, we were challenged to come up with a lesson in groups, using Bee-Bots, with a numeracy focus. My group and I used a treasure hunt theme, incorporating the 3 times table: the idea was the the learner would start at the ‘ship’ square, and would have to complete the sum on that tile, in this case 3×1. Once the learner had gotten the answer, they would look for the card with the answer on it, in this case they would look for the card with the 3 on it. If they turn the card over, they would find instructions on where to go on the map, using the points of the compass such as north, south etc. The learner will have to answer different 3 times table sums in order to eventually reach the treasure. 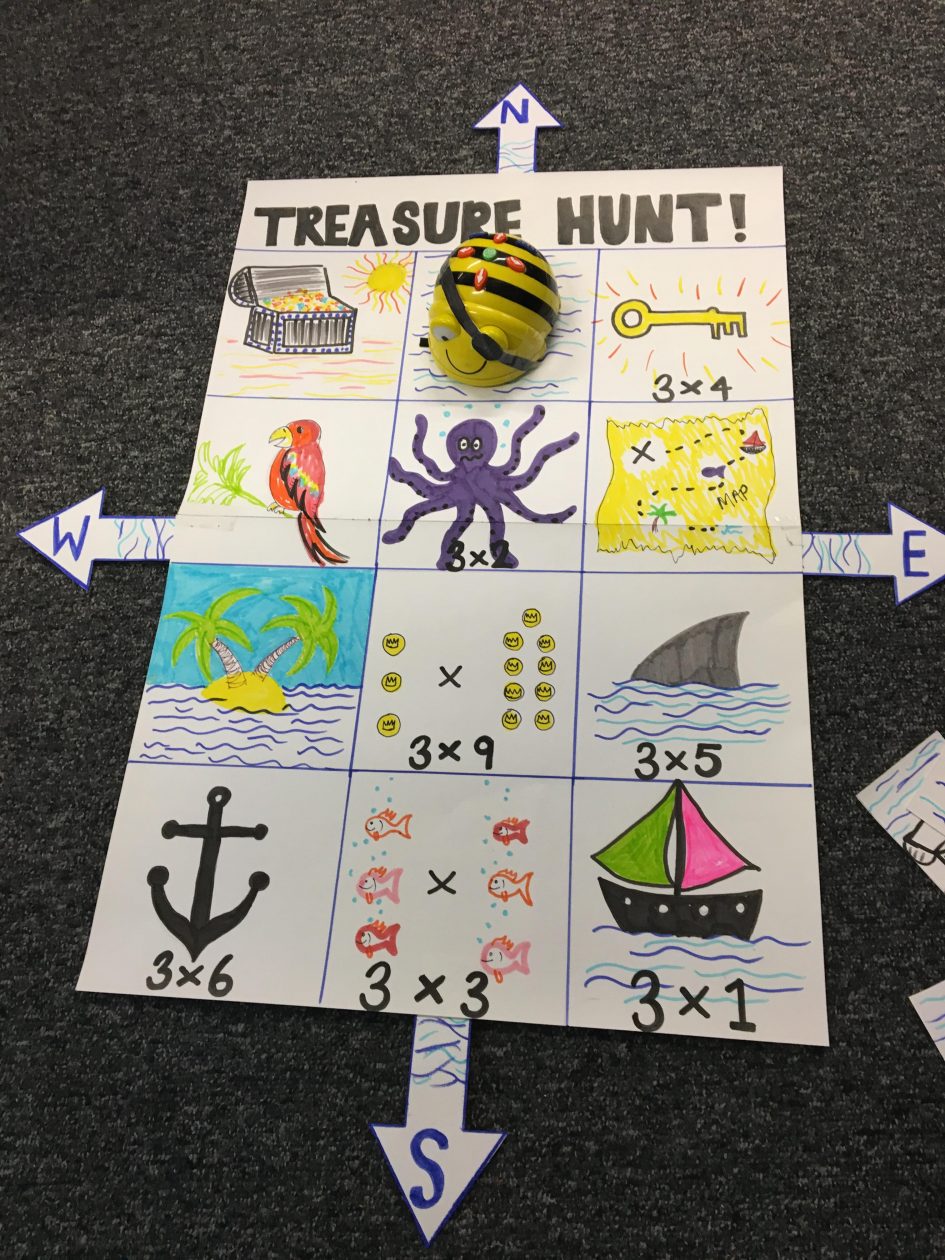 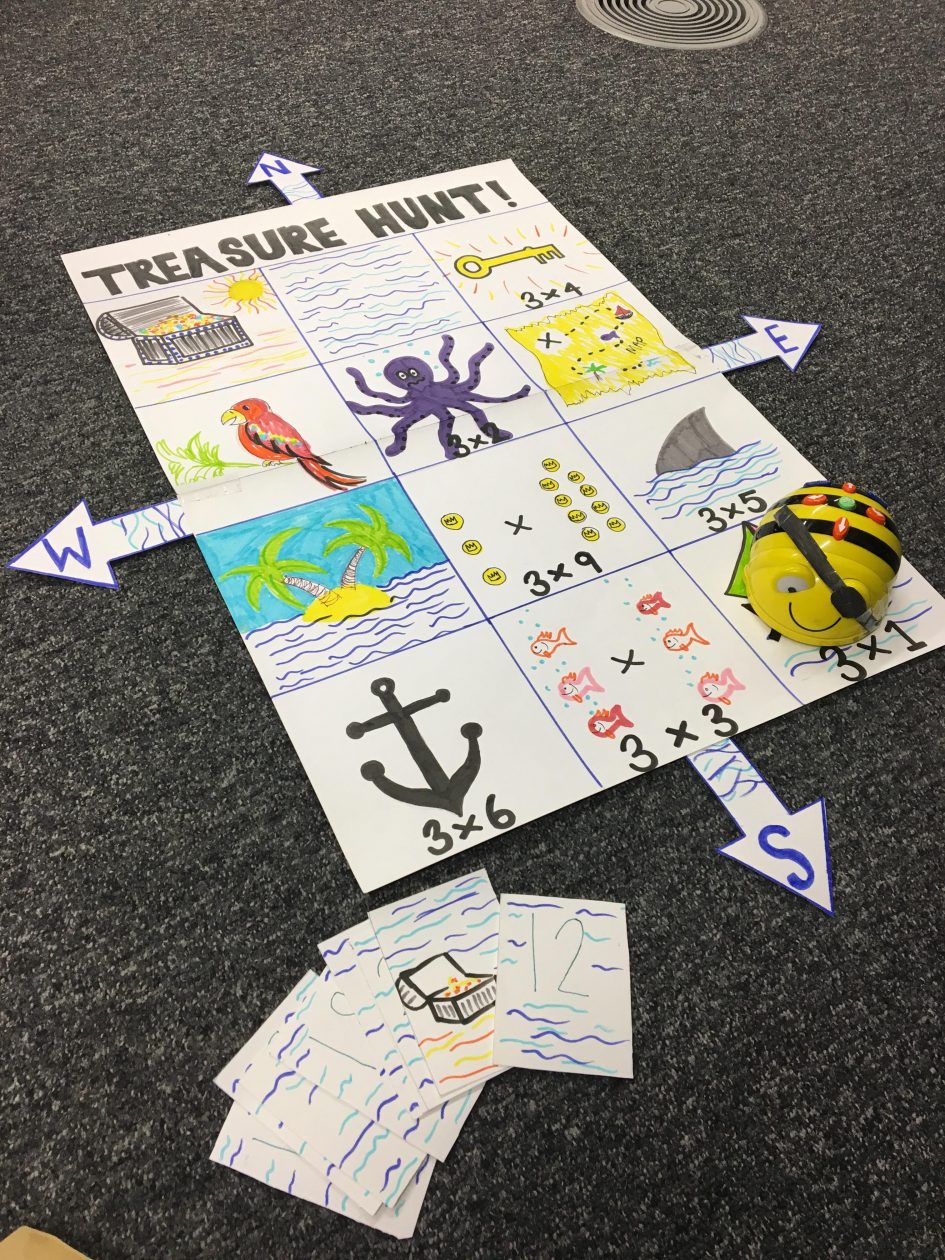 The hunt included some obstacles, such as the shark which you cannot pass! This encourages the learner to use problem solving skills and also brings more enjoyment to the game. 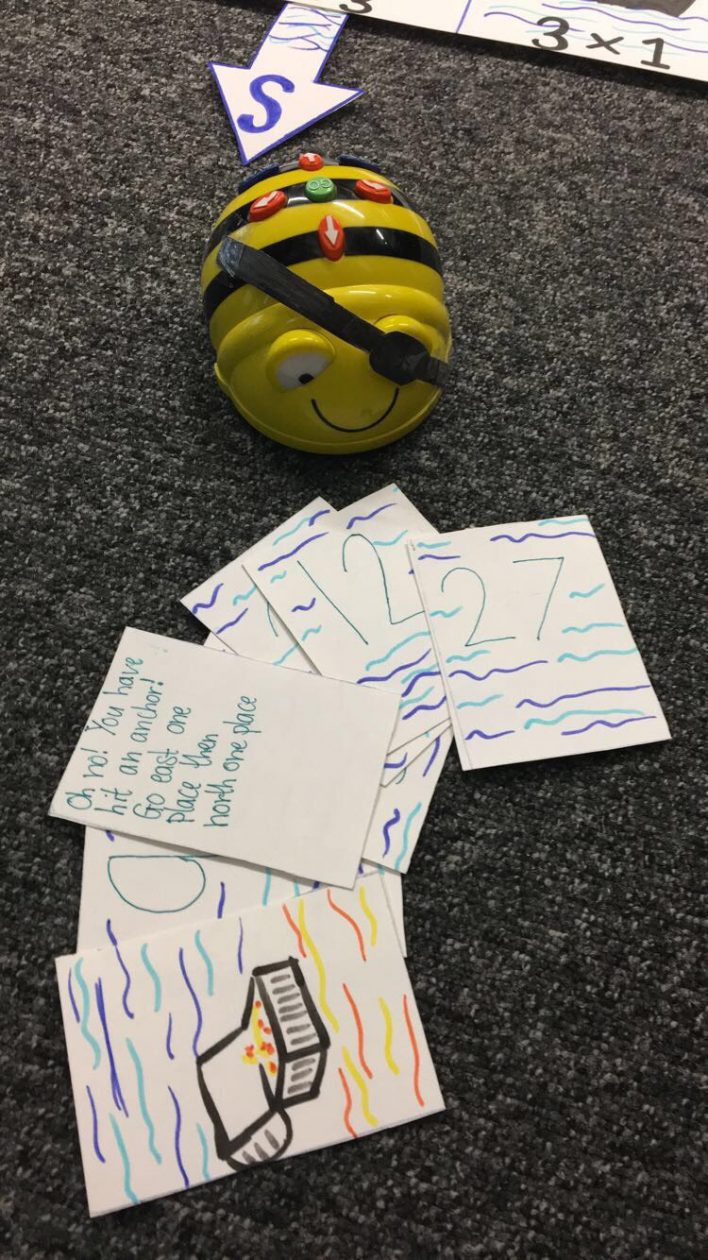 We even made a little eye patch to immerse the Bee-Bot fully in the game! 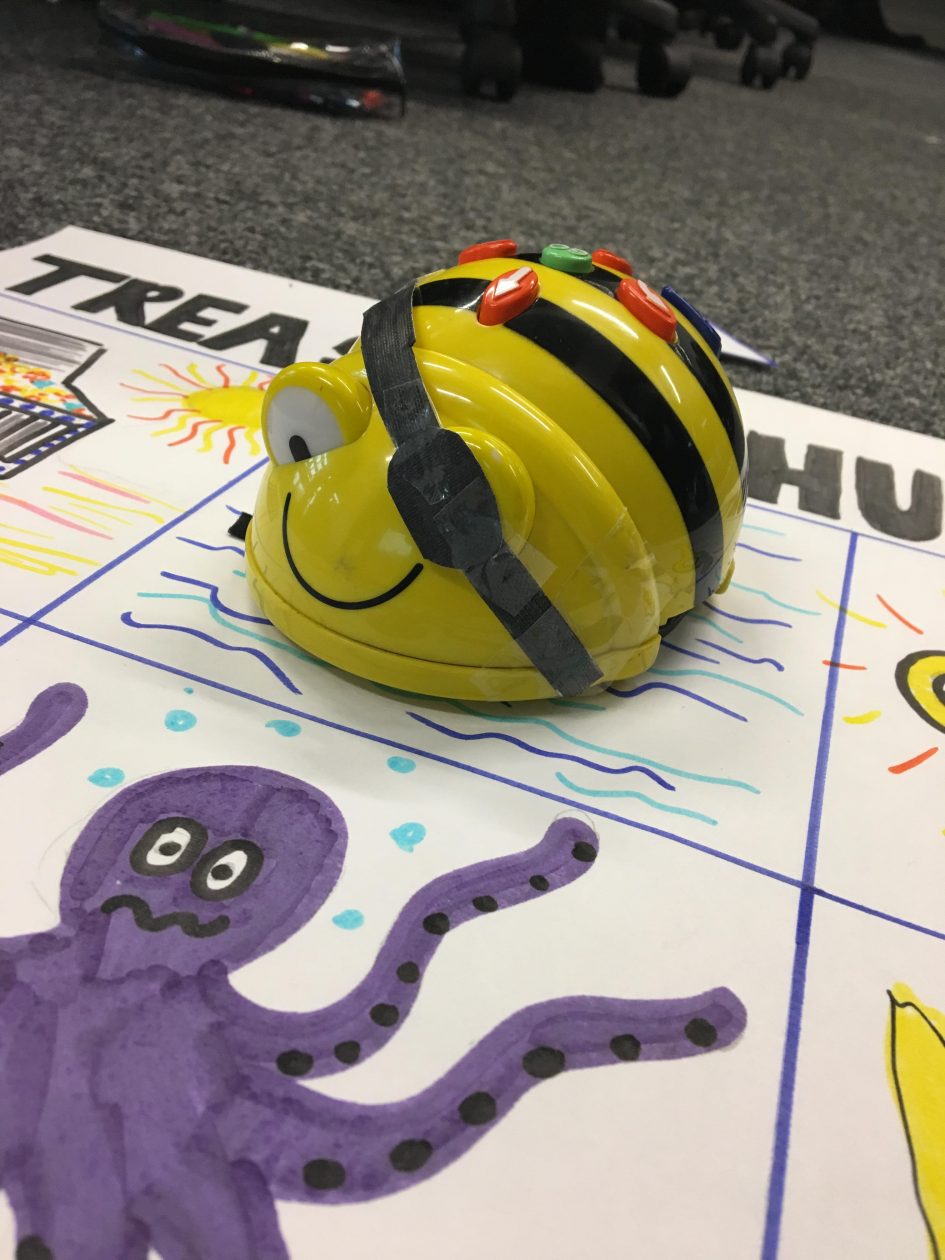 I thoroughly enjoyed learning about these programmable toys and can’t wait to take what I have learned into a classroom soon!

I have included a small clip of the the Bee-Bot in action!