I am a ‘Third Culture Kid’: a term commonly used when referring to a child who has been raised in a culture outside of their own and their parents. I am lucky enough to have grown up in Abu Dhabi, in the United Arab Emirates. From the age of 8 I have been surrounded by multitudes of various cultures and people from different backgrounds, celebrating holidays other than my own such as Ramadan, Eid al Adha and Diwali. 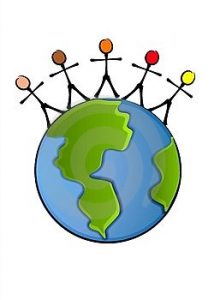 This has made me overcome the barriers which in many countries separate people and has allowed me to become increasingly sensitive towards others. The recent troubles with children caught up in wars in Palestine and Syria hit closer to home than one would expect. This was when I heard of Hanan Al- Hroub, the Palestinian Primary teacher who won Teacher of the Year in Dubai, 2016. After hearing her story of how she worked with children who had witnessed violence and the atrocities war had to offer and how orphans who had come to her secluded and scared were now reading and writing and gaining mental stimulation, they would otherwise had not got. It made me realise how important teachers were in the world we live, especially today, where students from all around the world come together in a classroom. The importance of breaking down the walls between culture and religion and focussing on accepting and understanding.

What better way to do that than to teach?

I believe that through teaching I will be able to put to use my experiences as a third culture kid and promote a sense of acceptance in younger generations, simultaneously satisfying all my personal qualities I look for in a career: creativity, exercising my social skills and my kinetic nature. But most importantly, the realisation that a good teacher today means a better generation tomorrow.

My aim is to continue to travel, expand on my cultural understandings. I hope to break down walls between students, encourage interaction and togetherness in a world where it is more common for children to be brought up as third culture kids, as myself.

2 thoughts on “Why teaching?”