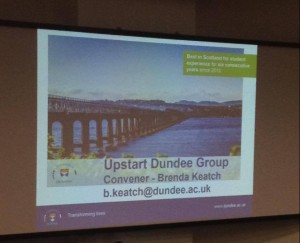 Last night I went to the Dundee Launch of the Upstart Scotland campaign. I went in not really knowing what I had signed up for, but I thought if nothing else I would come out more knowledgeable about what is going on in the world of education,. I decided to give it a go and I was pleasantly surprised and challenged by what I had heard.

Upstart Scotland is a campaign to introduce a kindergarten stage for children aged 3 to 7.  This is already what is happening in countries such as Finland, Switzerland and Estonia. These three countries came out in the top ten of OECD’s 2012 overall rankings in maths and science. The UK didn’t even place in the top 12. In the 2007 UNICEF summary of the wellbeing of children in rich countries, the UK came last. Again, countries such as Finland and Switzerland were in the top ten.

So what are we doing wrong in the UK? The speaker, Suzanne, pointed out that we are putting an increasing pressure on our children to achieve. Schools are competing with each other to gain a good reputation and they feel that the main way they can do this is by achieving academically. Therefore, they are testing children more, and at a younger age.
The importance of play was spoken about. Through play, children develop resilience, creativity, problem-solving skills, social and communication skills, self regulation and a love of learning. 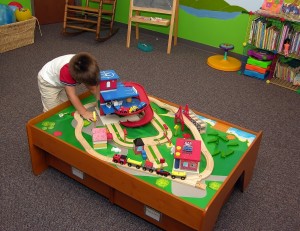 All of these are admirable qualities in the workplace. However, instead of giving our children time to play and to develop these qualities, we are creating this pressure on them to learn to talk and read as soon as possible. Childhood is not a race and we are not giving them time to develop the qualities they will need in adult life. Even though we now have a longer life expectancy we are shortening the time of childhood; there has been an emergence of the ‘tween’, a person who is aged between 9 and 12. No wonder there has been an increase in the number of child and adolescent mental health problems.
By starting our children at school earlier, they are ‘burning out’ earlier. Children are now hitting about age 14 and loosing interest in school. If children are already being tested and so are finding school boring at age 5, it sets the expectation that it will be boring throughout. This is what is decreasing the levels of academic achievement.
A health visitor also noted the influence that technology has had on children today. She said that she has been into homes were the children could swipe away on iPads and iPhones but they didn’t know how to turn a page in a book or even tell what was on the page. An article in the Guardian states that one in three under 15 year-olds have a tablet . Now I think technology is great and all, but there is a worry that it is taking over our lives. I say this having felt the hold technology, in particular social media has on our lives; I spend hours upon hours on my phone and it is one of my goals to drag myself away from this. There is a danger that children are switching outdoor, enriching experiences for gadgets.
What do I think? Well, there is a great amount of evidence and reasons to support the campaign. However, I completely understand that the views I have heard will have been biased and so I should investigate the other side of the argument. I plan to do this sometime soon, although with upcoming placement very soon it may have to wait until the Easter holidays.
For more information, here is a link to the Upstart Scotland website http://www.upstart.scot/