When we were given the opportunity to pick our elective for MA2 I can easily say it was a tough decision for me. Throughout my time at high school I never really excelled in one particular subject, I feel as though this was mainly due to a general lack of enthusiasm, people are always saying “a good workman never blames his tools” but I do believe that my teachers were partly to blame. In MA1 we were asked to write a post explaining how we feel about mathematics and I wrote a bit about how my teacher had an impact on my lack of confidence within the subject. Throughout school the teachers only really seemed to concentrate on the pupils that were either extremely “smart” and enthusiastic or on those who were extremely challenging and I always found myself floating in the middle of the scale struggling to get hold of the class teacher when I needed help. However, it would be unfair to just blame my teachers for my feelings towards mathematics as I could have definitely shown more enthusiasm myself.

So how did I eventually reach my decision to pick the Discovering Mathematics elective? I decided to think back to my experiences of various subjects at primary school because I felt this would be more relevant as I do eventually want to teach at that level. I really excelled at maths throughout primary because I found it extremely fascinating. I don’t know if this was because I was fortunate enough to be placed in the top group and maybe we got more attention because of that. Due to these experiences I decided to choose the Mathematics elective because I want to ensure that the children I teach enjoy it just as much as I did. I feel as though maths is a big part of our everyday lives and we really don’t think about it enough, this morning the first thing I did was switch off my alarm that I had set the night before using skills that I had acquired at primary school! It is important that children understand that mathematics goes beyond the set topics within the school curriculum and I would like to gain knowledge on how to stop that collective sigh from the class when they find out that they have Maths after break. In the end, all of these reasons made it clear that this elective was the right one for me and so I had reached my decision! 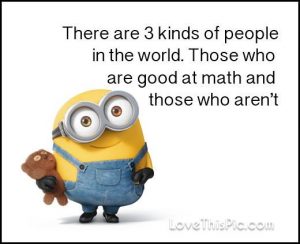