Maths is everywhere, from structures and buildings to technology and science, mathematics can be seen by anyone at anytime. However, what some people fail to notice is the importance of maths within art, with sequences and ratios being used to create some of the most famous paintings and designs ever created. ad far back as Leonardo Da Vinci, art has been considered when creating beautiful masterpieces that survive generations. 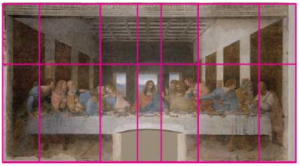 This famous depiction of Jesus’ last supper with his disciples is well regarded as one of the most famous paintings ever created, although many people do no know the importance of maths within the masterpiece. The pattern drawn over the painting is known by the term ‘Golden ratio’ and is thought to be aesthetically pleasing to the eye. The golden ratio is used to draw an onlookers eye to the focal point in the painting, in this case Jesus, then as the eyes look closer more details are noticed.  The golden ratio uses proportions, ratios, symmetry and balance to create an aesthetically pleasing look, and has been used in paintings and structure to create beautiful works of art. 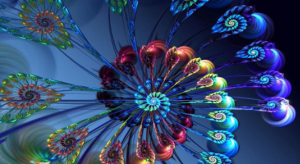 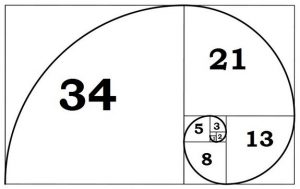 The Fibonacci sequence is a series of numbers where a number is found by adding up the two numbers before it, however, this sequence can also be used to create beautiful pieces of art containing geometric shapes. The sequence starts 1,1,2,3,5,8,13 and so on, and can be used to create the ‘perfect spiral’ in geometric form, this once again draws our eyes to the centre of the work and then presents the rest of the design.

Maths and art lends its self to Liping Ma’s idea of ‘multiple perspectives’ (Ma, 2010) and how their are multiple ways of looking at and presenting one idea. The examples of art  I have presented show the importance of looking at maths in different lights. in the example of the Fibonacci, a simple sequence created by one man has been studied to the point that people noticed an artistic implementation that could be exploited. Therefore people having differing ideas on what certain math’s is trying to explain and show us Is vital in the human exploration of mathematics as there is always different ways to express the same subject matter.