My post is about a historic person rather than a character. Her name is 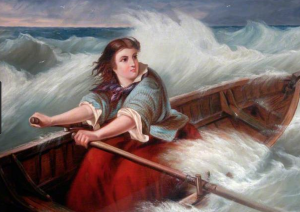 Grace Darling. She saved 18 people’s lives at sea off the coast of Bamburgh, Northumberland on one of the Farne Islands at just 22 years old. She was the first woman to be awarded for bravery by the RNLI. She is a heroine of her time.

Today is the 7th September 1838. The weather is calm after the storm this morning.

Maybe some day someone will read my diary and read about what I have done on this day. Maybe I’ll be remembered for what I have achieved.

The day started as it normally did for a 22 year old 5 foot 2 woman who is the daughter of a lighthouse keeper in a family household. I helped mother with the laundry after deciding what dress to wear. We are the same height and build. I then helped my father with cleaning the lighthouse. Our lighthouse is on the land but beside a lot of the Farne Islands which can be often covered by the strong waves of the North Sea, so a lighthouse is essential to help save the lives of those out on their boats. After the day was done we went to sleep, but being waking up early the next day to strong winds and rain battering against by window is something I will never forget.

It was 6am. I was unable to sleep so did what I normally do, admire the view of the sea. It was extremely choppy. In the distance I could see a ship on the Harcar Rock and I woke Father uo straight away. We found our telescope to see if we could see any life on the rock. It wasn’t until 7am that there was enough light and we could both see movement in the distance.  The lifeboat had been called for already from Sunderland, but I knew it would take at least three hours for it to arrive. It was at that moment I knew we needed to get our 20 foot rowing boat and rescue the survivors, Father was clearly nervous but he knew the water and he knew the rocks. We rowed for a mile, tackling the wind and spray from the sea. But we made it to the SS Forfarshire.

While Father helped those onto the boat I had to try and keep it balanced. It was so windy and the water was so rough. I had to comfort Mrs Dawson. Both of her children were lost this morning. There were still two men on the rock but father went back for them and the remaining bodies of those who did not survive. But we did it. We saved 18 lives.

The ship was built in Dundee by Thomas Adamson in 1834. The ship was on a voyage from Hull back up to Dundee when it hit the rock. It saddens me that this ship was only a few years old and never made it back to its home city.

This is a day I will never forget. I hope people will be proud of me. 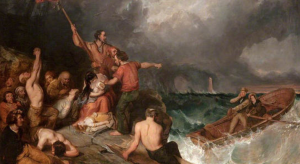 The reason I chose the character for this post was because I visited the Grace Darling museum in Bamburgh this weekend and was utterly amazed at the bravery of this woman. She was only a couple of years older than me at the time of the rescue and is also the same height as me. When I was there and saw the size of the boat she rowed I was utterly amazed. I want to be able to teach pupils about Grace when I have my own class and be able to adapt her story to drama lessons. Pupils will be able to show so many emotions through this story: fear, sadness, hope and happiness.

As the ship was also made in Dundee it will allow pupils to learn about the shipbuilding industry Dundee was known for and be able to add more characters into their dramatisation.