My partners observations were very closely aligned with my own, we agreed on strengths such as the teacher making the classroom a fun place to enter in the morning by greeting each child and using “fun” language; e.g. “Ok ladies and jelly beans sit down now”, the teacher also used positive feedback and phrases to praise the children; e.g. “good girl”, “good boy”, “well done” and “smashing”.

I was surprised that the teacher spoke to Michael with a harsh, aggressive tone and raised voice. I felt that this could be upsetting for Michael and the other children in the classroom.

My partner’s notes were very similar to my own, many of the observed strengths and areas for improvement were clear to see in the video, this made the task quite an easy one.

Feedback is a constructive and positive way to practice, whereas judgement is a negative practice, is based on assumption and is often unkind.

If I could take only one idea from these tasks I would take the idea of “always develop and demonstrate a growth mindset with your pupils” because I believe that it is one of the most important ideas to develop resilience in children.

I am excited about going to my first placement but am also anxious as I am not sure what to expect and am worried that I may not keep up with the workload of tasks and the formative assignment.

One member of our team provided good leadership skills, she had experience of a similar task and was happy to talk about it and let the team know what to do. This was pretty informal and the team leader stood out because of her experience.

The team that explained their den building to us did a very good job, they were very thorough and explained everything clearly. I don’t think that they missed anything from the 5 P’s at all. One person from the team began explain their den building process and the others in the team added in information where necessary.

We were in quite a noisy environment with other teams and the general public around, this meant that the team had to project their voices more than they normally would in a classroom setting and had to repeat themselves and stop to look at the speaker rather than listen whilst they worked. I didn’t find this too difficult as I was able to project my voice when needed and clarify any instructions when needed. The environment didn’t distract me during the task as I do not find it challenging when working around outdoor distractions, I find it easy to “block them out”.

Our negotiation was to swap a team member with another team and this was not successful. We felt, as a team, that we didn’t want to lose one of our members as we worked very well together and got on very well. We did make a small attempt to complete our negotiation challenge but this was probably not done as well as it could have been as we didn’t really want to change our team members. This was a particularly difficult challenge as we found, when we were trying to negotiate team members, that other groups felt the same and didn’t want to swap their team members either. 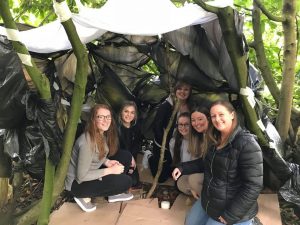 I have really enjoyed my first week as a UWS BA1 Education student.

I was quite anxious and worried about starting university as a mature student because I expected to be, very much, older than my cohort. I was pleasantly surprised to find others of a similar age to myself and, also, that the younger students are very friendly and I have things in common with them.

Much of my first week has been focused on communication and I have really enjoyed it. The communication lectures and workshops have been eye opening for me and have made me think, more than I ever have, about how I communicate and how I can build on my communication skills.

I am very aware that I become very nervous when speaking out in group settings, however, I have set myself a challenge to help to overcome this. I will speak out, if I have something to say, when in group settings. I hope that this will help to build my confidence and will put me more at ease when faced with these challenges.