Today in digital technologies we looked at the use of animation, in particular stop motion animation, in schools and explored different apps used to create animation in school. The apps we explored were Puppet Pals and iMovie.

Animation is “stringing together a sequence of static images, generally so that they appear to move” (Jarvis, M. 2015)

Animation is an excellent way to incorporate digital technologies into classroom lessons. Animation can teach children a huge array of skills for life such as empathy and they are a very powerful social emotional learning platform as children can be given a situation to animate or can watch an animation and given the opportunity to write a letter to the characters to explain how they would handle a situation within that animation.

Having done a little research into pre-made animations I came across Habits of Mind Animations which are pre-made animations which help children to learn about different skills needed to live in society such as persistence, managing impulsivity, listening with understanding and empathy and thinking flexibly. These animations help children to understand concepts which may be difficult for them to comprehend and make them fun to learn. The animations aim to help children to develop a growth mindset and I believe that, with the correct teaching and learning incorporated with the videos, they are a fantastic resource to have. I am pleased that I have found these videos as I will definitely use them when teaching children about different concepts, such as persistence, that they may find difficult to comprehend. I envisage that I will also use them within a classroom as children may be able to relate to the characters and understand different concepts more when explained through these videos than they would if it was only me trying to explain it.  The persistence video, in particular, may be an excellent resource to look at in the classroom before transitioning to a new lesson or activity in which it is known that one or more of the children in the class may struggle and may be likely to “give up”. Below is a “sneak peek” of one of these videos with a small explanation of what they are “all about”.

The first animation app that we looked at in the class today was Puppet Pals. Puppet Pals is a very simple to use app and would easily be suitable for early and first level users. It is quite basic with limited options on the ‘free’ download. Optional characters and backdrops are available on Puppet Pals, but these have to be purchased. With the free version, the one that I used, there was availability to create a fairy tale animation. I can envisage young children, early and first level, engaging well with Puppet Pals. The controls to move the figures around are simple as the user simply uses their finger to move a character and the controls for recording your own voice are simple to use. Puppet Pals also allows the user to incorporate their own image into the animation, this allows them to become the star of their own animation which is hugely engaging for children. I did find Puppet Pals somewhat limiting as the backdrops and characters were limited to fairy tale in the free version that I was using, the characters are not poseable in any way and the app doesn’t enable the user to move them to create the illusion of them walking. This makes the whole things a little “young” and inflexible, in my view and, whilst I would definitely use the app as an introduction to animation for early and first level pupils, I wouldn’t use it for second level pupils as I believe it would be too restrictive for them. Below is a representation of the short animation that I made using Puppet Pals, the photos are a visual representation of some of the tools available on Puppet Pals. 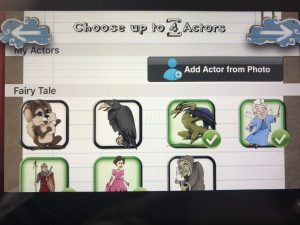 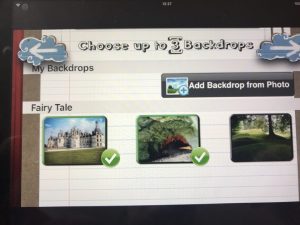 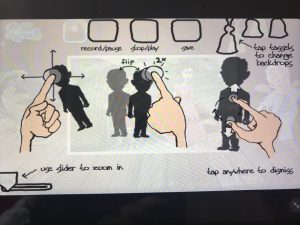 As you can see, at the beginning I move to the wrong backdrop in the video and have to change it quickly, there isn’t an option to edit in Puppet Pals, so I left the mistake in rather than shooting the video again. It would be beneficial if users had use of some editing tools within the app to rectify or change any content that they wish to rather than them having to begin the whole animation again from scratch.

I enjoyed using iMovie on the iPad and, after watching some tutorial videos and “tinkering” with the app for a short time, I made a short video using a “bendy man” with one of my peers. I enjoyed working with my peer on this video as we were able to discuss the whole process and issues that we were having. We concluded, during our conversation, that this could be an excellent teaching and learning resource to use in school for children at all levels and that asking children to create their own animation would be an excellent way to encourage creativity as well as helping to foster a culture of collaboration and co-operation within the classroom.

At the end of today’s input, we received our task which we would complete in the next input. We were tasked with creating an animation, in groups, that does one of the following:

I chose to work with the same peers that I worked with during our previous, Cyberbully, video because we worked very well together on our previous task and we all get along well and listen to all opinions. We are all able to assert ourselves well within our group and we are able to utilise everyone’s strengths within the group.

Next week we will, hopefully, create a fun, engaging and informative animation together!