According to UKCRC (2010 P.5) a solid working knowledge of programming, or coding, is needed for a “thorough grounding in computing” and that programming fosters creativity and problem-solving skills needed in the modern curriculum and, indeed, the modern world. Coding and programming were made mandatory in schools in England in 2014 and Scotland has, as yet, not followed suit in this act (Curtis, 2013). In Scotland, particularly in primary school, computing and programming are taught on an as-and-when basis. This does not teach our young people these valuable, transferable, skills of problem-solving and creativity which are dominant within society now.  It is my belief that coding, as well as all digital technology skills, should be legislated in Scotland to ensure that future generations are able to keep up with the ever changing, modern, workforce.

UKCRC (2010 P.9.) found that there was a falling trend of young people in schools taking up computing-based subjects within schools. In Scotland, in particular, young children were not gaining any real computing knowledge within school, some older children were using older and obsolete software and programmes and the focus is on the programs themselves as opposed to the creation of the programs.   Also at higher grade there were only two subjects which can be taught: computing and information systems. These two subjects were optional so students could choose not to study them. This situation has changed slightly – In 2015 the Information Systems course was removed as a National Qualification and the Computing Studies course was renamed Computing Science.  This new qualification – available at National 4 level to Higher focuses very much on coding and the different programming languages and although it does not ensure exposure to coding for all pupils, goes a good way to resolving the problem of coding being available if desired.  This means that the Computing Science qualifications from school allow progress to degree level courses at university.  In my opinion Scotland may want to follow England’s example and legislate ICT and digital technologies within the classroom, this will ensure that all young people are kept “in the loop” with ever changing technology and up to date with current technology.

Naughton (2012) argues that all children in the UK should be taught how to code no matter what background or location they come from and that they should have the opportunity to “progress to the next level of excellence in these activities”. Teaching all children within the UK to code is a necessity because digital technology practically runs the modern world now and coding skills are vital to understand how these technologies work. It is essential for children and young people to understand the technological world they are growing up in. Naughton (2012) agrees with UKCRC (2010) that teaching coding or ICT fosters problem-solving skills, however, he delves deeper by saying that these skills are a new way of thinking called “computational thinking”.  This is about detection, using abstraction and decomposition when tackling large tasks as well as many other highly effective skills which will set the learner up for employment within modern society.

The teaching and learning of ICT and digital technologies within schools is imperative if children are to keep up with the continuously changing technologies in the world today. It is essential that children are given the skills and tools needed to function effectively within society and there is no doubt that coding is one of these skills.

This week in Digital Technologies we looked at coding within the classroom and, in particular, the programme Scratch Jr. Scratch Jr is a simple coding programme where the user can programme characters to move and speak, backgrounds can be changed, and multiple characters can be programmed at one time to have a conversation or walk with each other. Sound, music and sound effects can also be added, and the programme can be made interactive by programming characters to move when tapped by the user. The user is able to create their own interactive stories and games on Scratch Jr.

Scratch Jr is very user friendly and easy to use which alleviates any fears that the user may have. It is a simple coding programme suitable for very young users, from around age 5, or users who may be worried about their coding skills. The progression from Scratch Jr would be Scratch, this programme is more complex but still suitable for primary aged children, around aged 10, or children who may have sound coding skills. Scratch looks more complex and is more daunting to look at if, like myself, the user has little or no coding experience. I have attached some photos to offer a comparison of both user interfaces. The photos offer a visual representation of the opening screen on both programmes. 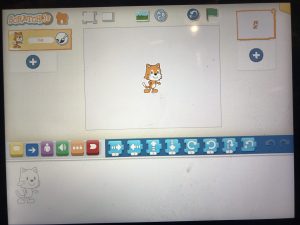 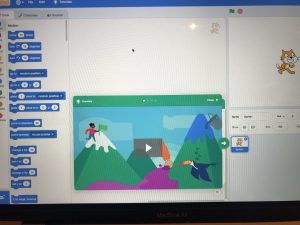 Our task today, with Scratch Jr, is to create an interactive story to promote literacy skills and make like to Curriculum for Excellence.

I chose to look at the Curriculum for Excellence outcomes before looking at the Scratch Jr programme and plan the story that I would be creating. Having looked at the outcomes, I decided to focus on two:

I chose to create a story about a character who had lost their name and for that character to go on a journey to find their name. The characters that were met during the story would give the main character a letter or letters from their name and those accumulated letters would, at the end of the story, spell out the main characters name. This story will allow children to consolidate the prior learning of phonics, letter patterns and spelling rules as they will have to help to sound out the letters and sound out the name at the end of the story. They may use blending strategies or other strategies to help them and there is also opportunity for collaboration with their peers in the form of asking questions, discussing the story and finding out the main characters name together.

Scratch Jr, as I expected was very user friendly. It was easy to change backgrounds, move characters, create codes etc. Whilst building my story I found that I could easily add a picture into one of my characters. This has great potential for children as they can become a character within a story and, I imagine, this would be very captivating for them. I chose to make one of my characters with my young daughter’s face, she was very excited when she saw it and was very engaged in using the programme.

I experienced some difficulties when using Scratch Jr which weren’t anticipated. I expected this task to be very simple as the programme is so user friendly, but this wasn’t the case. The first difficulty that I had was when I realised that Scratch Jr only allows for 4 screens, or pages, to be added to each story. So, the stories created on Scratch Jr are quite short. I discovered this when I was attempting to add page 5 of my story and had to quickly re-think my idea. I remedied this issue by using the same page for more than one event and I shortened the main characters name from “Archie” to “Arch”. I was happy with this solution. The second difficulty that I had was when trying to work out the timing of different characters entering the screen, speaking and moving. It wasn’t easy to have several characters on the one screen and try to figure out the timing of all of their movements. To remedy this issue, I used a trial and error approach. I simply ran the programme and added pauses, more steps or any other codes that needed input, or deleted. I enjoyed collaborating with my peers during this task and enjoyed viewing their stories and seeing how excited and engaged they had become when using Scratch Jr. One peer, very kindly, offered advice on my story and how to make the pages turn automatically which I was thankful for. This took away some of the interactivity of the story, however, I believe that it was beneficial as it was difficult to know if the characters had stopped speaking and moving and to know when to turn the page.

The time taken to complete my Scratch Jr story was around an hour and a half and I am very pleased with the end result. The completed story can be viewed below.

I found, after a brief discussion with my lecturer, that this story also lends itself very well to Article 7 of the UN Convention on the Rights of the Child which states:

The Scratch Jr story that I produced would be a fantastic way to introduce this right to children and would foster interesting conversations with children about the right to have a name and be known by that name. Scratch Jr could be used to introduce and discuss many of the rights of the child and would do so in a child friendly manner.

I feel confident using Scratch Jr and can see, with evidence from my own children, how engaging and exciting it is to use. I aim to improve my story by adding in more interactivity with the user and the characters, as well as, some music and sound, possibly some different character voices. I can see that this would be I fantastic tool to encourage creativity in children by asking them to create their own story or, perhaps, finish a story which has already been started. This may be a good tool to use when looking at predicting what happens in the child’s story book or reading book.

I would like to expand my knowledge using the follow-on program, Scratch, as I have no prior knowledge of it and I find the more complex interface a bit daunting to look at. I am confident however that when I begin working on Scratch I will have just as much fun as I did when using Scratch Jr.

I am thoroughly enjoying the Digital Technologies module and furthering my knowledge on digital technology as well as Curriculum for Excellence and other important texts. I hope the remainder of the module is as fun and exciting as the first few weeks have been! Only time will tell.

The photos below offer a visual representation of my coding work on Scratch Jr. 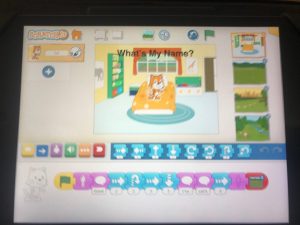 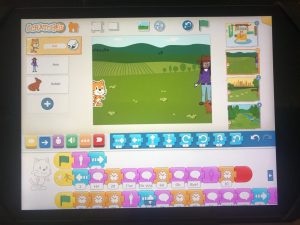 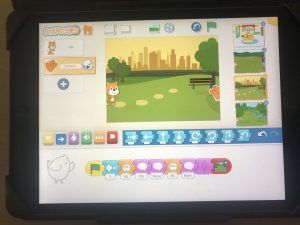 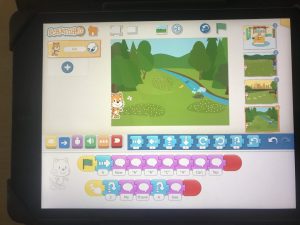