The development of digital technology in this modern age means that multimodal texts have become more dominant within the classroom. A text can be described as being multimodal if it combines multiple semiotic systems. There are five semiotic systems which are:

Examples of multimodal texts are: live, such as a pantomime performance or concert; digital, such as presentations, e-books or video games; or paper, such as comics, story books or posters. Each of these incorporate two or more semiotic systems therefore they are multimodal texts.

I have previously learned about multimodal texts within the Literacy for Understanding module at university and am furthering my knowledge on the subject through this module and through further reading. I am becoming more confident with a variety of multimodal texts and more aware of how they can enhance teaching and learning within the classroom.

Beauchamp (2012. P.8) states “the multimodality of technology is another reason to use it, as it allows teachers to present an idea in a variety of different ways to help pupils understand it.” Children learn in a variety of different ways and there are many different learning styles, including visual, oral and kinesthetic. Multimodal texts can enhance learning within the classroom because it can incorporate these different learning styles and make the topic being taught captivating, motivating, interactive, personalised, dynamic, memorable and engaging.

Although children are growing up surrounded by digital technology there should be no assumptions made about their abilities.   Pupils need to be taught the skills to use technology (Beauchamp, 2012. P.81) – however, to be able to teach the use of this technology effectively the teachers must be able to use them skillfully. There is no point in spending money on ICT resources when teachers and staff are unsure or are not confident in using them effectively. Teachers, first, need the knowledge and skills to use and teach the use of technology as this is key to the effective learning of it (Beauchamp, 2012. P.100). This is further backed up by Drigas and Papanastasiou (2014) who found that “teachers are critical agents in implementing the software and in ensuring the appropriate use of the technology to promote quality interactions and interactivity”.

In addition, multimodal texts have the ability to open lines of communication with children who may struggle with their communication skills. The impact of being able to use different semiotic systems to engage means that non-verbal children may still engage with technology, children who find it difficult to communicate their thoughts can still engage, the list of possibilities is endless. This makes the use of multimodal technology in the classroom invaluable.

This week in Digital Technologies we looked at multimodal text and, in particular, ActivInspire.  I had never had any interaction with ActivInspire before this lesson, however, from the lecture PowerPoint and watching online tutorial videos from YouTube (PrometheanUKI, 2016) I expected the programme to be similar to the PowerPoint programme and expected it to be just as simple to use. The opening screen of the programme looks very user friendly and looks easy to use (see photos). I was mistaken in my assumption, as you will find out when you read on. 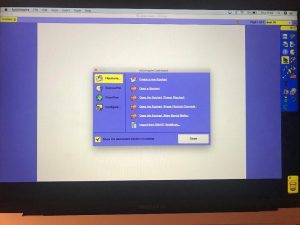 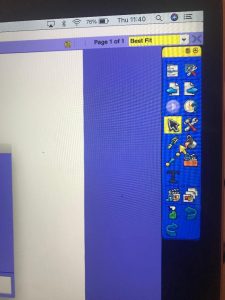 The task today was to create an interactive flipchart with ActivInspire, considering the tools available and making use of different tools whilst also considering the appropriate Curriculum for Excellence level.

I wanted to create a lesson that would be used in conjunction with my, early level, BeeBot activity and planned to create a scene where the children would put together and label a flower by dragging and dropping parts into the correct location. This would have helped to consolidate the learning from the outcome:

When happy with my plan I opened up ActivInspire and began to tinker with the programme. All seemed well and I noted that there was an array of different tools to use, I was excited to use the programme and create my own interactive lesson. I created a background from photos sourced from Pixabay and then began to create the flower for the children to put together. I realised, after searching for a while and consulting with other members of my cohort, that the version of ActivInspire I was using did not have a “shapes” tool which did pose a bit of a problem as I needed it to create the different shapes for my flower. After some more tinkering, I decided to create the shapes in a Word document and paste them into the ActivInspire programme. This worked well but took some time. I then continued to build my flower and labels for the children to use. 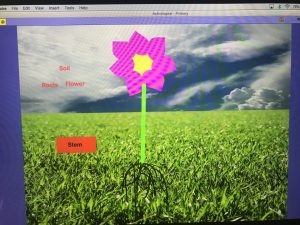 I found that ActivInspire was very different to PowerPoint in several ways. PowerPoint, I find, is a very simple and easy system to use but I found ActivInspire quite tricky and it took a long time to get used to. ActivInspire, however, has a vast array of tools which can be used interactively that PowerPoint doesn’t have. I would, most likely, still gravitate towards using PowerPoint within a classroom and this is because I do not have the confidence to use ActivInspire effectively yet. I would hope that, with more tinkering and looking at tutorial videos, my confidence using ActivInspire will grow and I will feel more comfortable using it because it could enhance teaching and learning within the classroom a lot because of it’s interactivity.

Overall, I enjoyed making the interactive flipchart on ActivInspire, however, I don’t feel that I used it to its full potential and would strive to familiarise myself more with the programme so that I am able to enhance my lessons when teaching the children to use it. I can see that it would engage children and would capture their attention and excitement because of its interactivity and multimodality. I will take the time to delve deeper into ActivInspire and create more lesson plans using it. I will also look into how to acquire the programme with the shapes tool in it.