Today we were given the task to create a lesson on Scratch Jr. Scratch Jr is “an introductory programming language that enables young children to create their own interactive stories and games” (ScratchJr, n.d.). With the rise of technology over the years, this application has become increasingly popular and is commonly being introduced to children in early and first level.

Coding is becoming a key skill in our modern society which is why it is vital we begin to teach children the basic principles in early level. Thus, giving them the necessary skills and understanding to be developed throughout first and second level and perhaps used within their future careers.

Introducing this application allows children to either work independently or in groups while using their imaginative skills to compose a computer game of their choice. Coding also involves a different way of thinking and allows children to both use and develop their problem solving skills (Naughton, 2012)

Today, we worked independently and created a lesson of our choice on Scratch Jr. Personally, I have never used Scratch Jr before and have little to no knowledge regarding coding. Therefore I decided it would be beneficial to begin by exploring the app and looking into the features available before creating my lesson. I also looked at some of the examples on moodle for some inspiration as I wasn’t sure exactly what I wanted to include. From this, I decided to incorporate math’s, in particular, adding and subtracting as I thought it would be valuable for children in early and first level, where this application frequently used.

For my first slide, I used the road background and added 5 characters. I then programmed for the characters to cross the road at the same time. In the corner of the screen, I had the Scratch character and programmed him to say “How many people crossed the road”. I then put a 45 second timer on before the answer was reveled in order to give pupils enough time to count in their own pace. 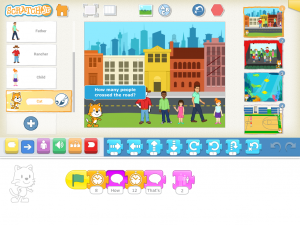 After completing the first page I felt more comfortable with using the app and continued to explore the range of interactive features. For the next slide, I included a background of a stage. I then added 9 people to the stage and programmed them to jump up and down to give the impression of them dancing. Again, I gave a 45 second break, before the scratch figure revealed the answer. 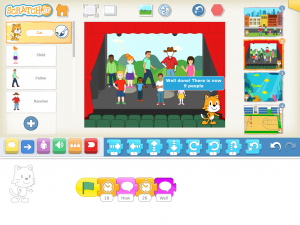 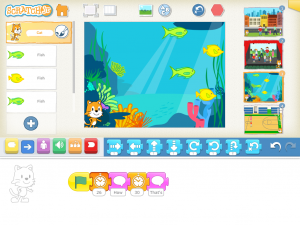 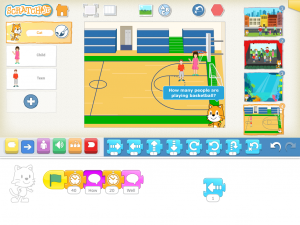 I linked this activity to the following experiences and outcomes:

I found todays workshop extremely beneficial and really opened my eyes to the importance of coding. Scratch Jr is a great, simple application which allows children to build their understanding. With the amount of computer and video games children in this generation play, I think it not only important for them to understand the process behind them but also a fun, interactive task that I believe they would really benefit from.

Coding is an essential skill which I believe needs to be incorporated more in schools in order to give children the capability needed to be successful in our digital society. As a developing student teacher, Scratch is an application I will be eager to incorporate throughout many curricular areas.