This week was a fun filled session focusing on multimodal texts, while looking at the ActivInspire and discovering the range of tools which can be used within the application to make it multimodal. In order to make a text multimodal it has to include at least 2 aspects of the semiotic system. There are 5 aspects in total which include:

As stated by Beauchamp (2012, p8) “The multimodality of technology is another reason to use it, as it allows teachers to present an idea in a variety of different ways to help pupils understand it.” I believe multimodal is an essential tool to maintain children’s engagement within the classroom and an concept which can be used for any curricular area in a range of different ways. The application we explored today, ‘Activeinpire’, has a great range of features which can be incorporated within activities, making them multi-modal.

ActivInspire is a popular tool used by teachers in order to enhance children’s learning through the use of interactive tools. It is an application which can be transferred to the interactive board and is seen in the majority of today’s modern classrooms. It is a versatile tool which can be used for any stage and a range of curricular areas. The application is simply defined as “ActivInspire provides a vast suite of tools to create and deliver dynamic lessons.” During this session, we were given the opportunity to either work independently or in pairs to create our own flipchart activity, including at least 2 aspects of the semiotic system. ActivInspire was always an application I was familiar with throughout both primary and secondary school as it was commonly used throughout lessons.

Despite this, I have never had the chance to create my own flipchart. From a learners point of view, I always thought ActivInspire was an effective tool which was easy to operate which was why I was looking forward to have my own opportunity to create a flipchart of my choice. However, it was more complex than I expected and it took me a bit of time to get used to it. For this particular task, I decided to work in pairs as for the majority of tasks I find this a more effective way of working. Before creating our flipchart, we decided to look at the resources on Moodle for some inspiration as we were unsure which curricular area to focus our flipchart on. After planning we decided to create it around math. The first page was a cover page, which was then followed by the cFE experiences and outcomes for the particular lesson. The lesson was focused on tens and units and targeted towards 1st level math’s. Children would be asked to move a box which revealed a number underneath, children would then be asked to move the appropriate boxes to the correct columns. We included sound of someones ‘clapping’ as well as pictures, making our text multimodal. Below are some images: 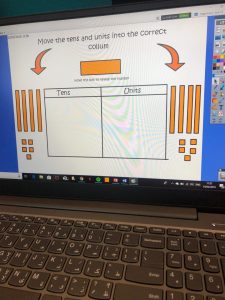 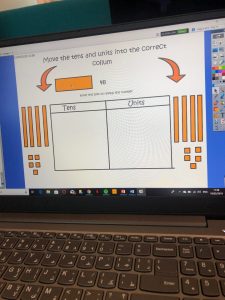 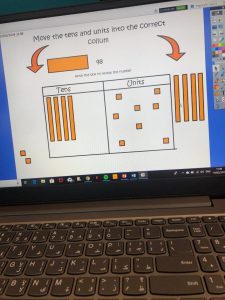 We linked our flipchart lesson to the following experiences and outcomes:

Despite really enjoying working my way through the ActivInspire, similar to all technology, there is disadvantages to this too. Firstly, I found it to be more time consuming than other applications I have previously used, such as PowerPoint and sway. The application itself also took some time to get used to and with the various tools available it can make it quite complex to make simple adjustments.

However, I recognise ActivInspire as an extremely effective tool used to enhance learning in an interactive way. The range of tools which can be used are incredible, such as the clock tool which is used to develop children’s understanding of time in an collaborative and captivating way.

Overall, I am eager to develop my skills within the ActivInspire application as it is a tool which I am keen to include throughout my lessons as a developing student teacher.

Beauchamp, G. (2012) ICT in the Primary School: From Pedagogy to Practice. Pearson.