For our first science input we had been asked to prepare a short science demonstration to share among our peers. Personally, I had not studied science since I had been in 2nd year, so the thought of this task made me slightly anxious. After researching ideas for topics for science projects, that could be done within the classroom, I realised there were LOADS of ideas that could easily be done, and explained, without a major background in science. I decided that I was going to make a lava lamp to show my group, as it demonstrated how different chemical compounds don’t mix- i.e. water and oil. The water and oil don’t mix ,and naturally separate from one another, due to water having a higher density to the oil. This also allowed me to make a simple, yet fun experiment, which would be possible to be recreated within the classroom. To demonstrate this process I constructed a poster which also displayed to process of an actual lava lamp and how the heat source causes the wax to rise and then as it cools the wax falls only for the process to start again. 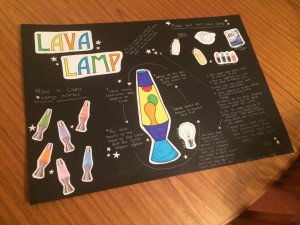 Overall, I was pleasantly surprised about this task. It allowed me to see that although I didn’t know much about science as a topic I was able to find enjoyment while doing this. It has also made me want to bring these tasks into the classroom on placement and share this excitement with the children working with.

Words relating to being a professional

Reflecting upon our work is important in order to allow us to pick up on the things we have done well on as well as highlighting the areas we may need to work on. Taking the time to look back over past work we have done will help us to progress as learners as it will show us our strengths and weaknesses. It is beneficial for us to try and learn from our mistakes in order for us to improve and therefore not replicate these errors in further work we do. As teachers it is crucial for us to always endeavour work to the best of our ability in order to set a standard for the children we are teaching. Although we must accept that not everything we do is going to be flawless and 100% correct; we must always strive to perfect any glitches we come across in our work so that the information we are providing is accurate and the example we are setting is one we are proud of. It must be remembered that we going to be the main source of information to these children and so buy providing them with false facts or an improper way of doing things we are letting them down.

However, making sure we take the positive aspects of our work into consideration is also vital for our progress too. By also taking your strong points into consideration this helps your confidence in your work grow; giving you assurance that you are on the right track and have the ability to produce work of the same quality again. The reassurance of knowing that they are on the right track may be what some people need who lack confidence in order to prevent them from holding back from producing work in the future. Therefore, I believe that reflection is vital in allowing our work to mature as it allows us to identify where we thrive and struggle. Where some people struggle to point out their strengths and weaknesses this is where comments from peers come in handy. Sometimes having an outsiders prospective on your work allows you to evaluate your work more clearly and so gives you a better outline on where you may need to improve or even strengths that you can continue to build on.

What do you see as the main benefits of working co-operatively?

– There are many benefits to working co-operatively. One of these being that it allows you to get an insight into professions or areas of the job which you may never of had the chance to look into before. For instance, as a teacher you will more than likely have to work with children who do not have English as their first language. As a result of this you will have to work co-operatively with an EAL (English as an Additional Language) teacher who will come into the classroom to support and train the teachers in order to provide them with strategies to support the children who do not have English as a first language. Another benefit to working co- operatively is that you will be able to give support easier to the different areas. As you will be working together it would be hoped that this would result in a positive working relationship. This would benefit anyone who was struggling with a particular area out with their expertise in order to be able to come forward and seek advice within the group. Working together co-operatively will also help to take a holistic approach to the child’s needs. For instance, by having teachers, social workers and CLD workers all coming together, this will ensure that all aspects of the child’s life is taken into consideration. An example of when this may happen is if the child was seen to be struggling at school and a board of people were brought together to discuss the reason why. By bringing all these professions together it will help there to be a more rounded view of the problem as each the professions have a different relationship with the child and see them in different settings.

What are the challenges to working co-operatively?

– Some challenges facing working co-operatively is that not everyone will share the same opinions so people may not be willing to take on other points of view. Due to a lack of willingness to take on others inputs this will hinder the groups working ability resulting in a delay in the task being completed. Another challenge to working co-operatively would be that not everyone has an understanding of different professions so wouldn’t know how to approach them. This can lead to people putting up barriers around themselves and so stops them from gong out and seeking advice from other areas of expertise who could help them get a more rounded and knowledgeable view on a matter.

– DECEMBER 2015 (Complete assignments early on in the month)

What does it mean to be an enquiring practitioner?

I believe an enquiring practitioner to be someone who is always keen to seek the answer of something which has a logical explanation and can be defined. They would always go out to find the solution which has the most solid evidence. 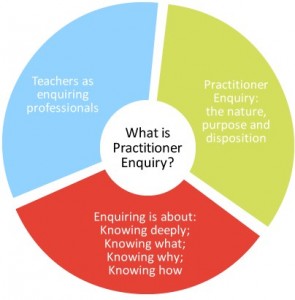 What does this imply for us as a student teacher?

It is important for us to be enquiring practitioners as student teachers due to this helping us to ensure that we striving to always give our students the correct facts. By ensuring that the information we are supplying to our children is backed up we then guarantee that they are receiving genuine materials. When children come to school there is an expectation that they will leave with a bounty of palpable knowledge that they can build on through life. We, as teachers, would be letting the children down if the information we taught them wasn’t based on fact; hadn’t been researched or couldn’t be proved. It is highly important we supply them with an assortment of knowledge to make sure that they have a diverse insight into many areas of the curriculum. I believe by providing the young people with as much of a rounded understanding as possible this will help discourage ignorance due to them gaining a knowledge of things they may never have come into contact with or be aware of in their normal environment.