Before going on placement, I took part in a lesson with a French Teacher on my first day in Orléans.  This was a taster session on the structure and characteristics of the French School System.  The session was given in French, so it was challenging to follow, however, I surprised myself on how much I was able to understand.  The information received on the French school system was very interesting and has been useful to know prior to my placement, as there are some differences between the system in France and in Scotland.

One of the key differences I learnt was that, in France, children are not obliged to start school until the age of 6, where as in Scotland, they begin school at the age of 5.  Another very apparent difference between France and Scotland is that French schools are described as “laique”, or secular in English.  A secular school system separates the church from the state, with the view that religion is a private affair and not for public life, therefore pupils do not express the customs of their religion and the classrooms do not have any religious symbols, such as a Bible or a Qur’an present.  This is to emphasise the French values of libertié, égalité and fraternitié, as the children view each other as the same and, therefore, equal.  As a result of this, French teachers do not teach Religious Education, unlike in Scotland, where Religious Education is compulsory.  Instead, French children learn about how to become valuable and civic members of society.  There are some schools is France where religion is part of the school, however, these schools are part of the private sector and so they are not free to attend.

The French school system is separated into four cycles, which encompass children from ages 3 to 18.  These four cycles span four different buildings, as children begin school at “maternelle” (nursery), move to “école élementaire/primarie” (primary school), then “collége” and “lycée” (high school).  By the time pupils reach their last year of “lycée”, they will have sat exams to receive, “le Baccalauréat”, a leaving certificate, which can be achieved in specific streams, such as, the sciences or literature.

“école élementaire/primarie” is the equivalent of the Scottish primary school and it is where pupils work through Cycle 2 and 3. Also included in Cycle 3 is “sixiéme année de collège”, known as first year of high school in Scotland, as the French Government wanted to ensure a successful transition between the two school by continuing on the skills and knowledge obtained in Primary School and encouraging Primary and Secondary teachers to work together to bridge this gap. This was something I thought as similar to the customs of Scottish Education, as Primary 7’s in Scotland often take part in transition days and special events at their cluster high school to prepare them for the transition. 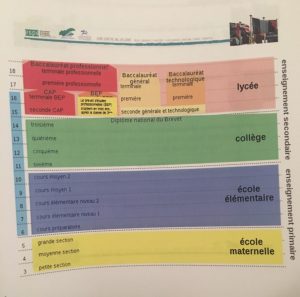 Teacher employment is also very different in France than in Scotland.  I was informed that teaching is a very popular career and jobs are sparse.  Like Scotland, France is split up into different regions making up 13 regions on the mainland in total.  The region we are staying in is Centre – Val de Loire and so students who study to become teachers in this region will sit an exit  exam, called the “concours” to become teachers.  However, they are then not guaranteed a job in this region and may have to travel or move far away depending on the demand for teachers.  Therefore, teachers in France do not get to choose what school they want to work in, which is a definite downfall for prospective teachers who may have family commitments or location preferences. 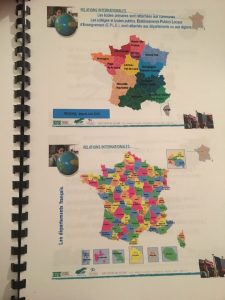 Overall, I found the differences between the two systems fascinating, and there are definitely pros and cons for each.  When evaluating the French system, one aspect I particularly liked was the structure of four cycles used to split up the different stages of school.  The use of cycles groups several years together so that there is communication between these years, thus ensuring a steady level of progression within and between the cycles.  However, personally, a major con in France is that the education system is secular, as for me, a child’s religion is a part of their identity.  Children spend around 30 hours a week in school, a huge portion of their childhood and so to spend this amount of time suppressing a part of your identity is something I disagree with.