Today I have began the week in the CE2 class. For around half an hour, the teacher leads a discussion on the news from the previous weekend to begin the day. This was homework that they were assigned on the previous Friday afternoon and involves them reading newspapers and watching the news over the weekend to keep up to date. I thought this was a great starter activity for a Monday morning, which I plan to use when I teach on later placements, as the classroom was abuzz with discussion and the children were very enthusiastic to listen and share. In the French curriculum, a lot of value is placed on discovering the world around you and developing citizenship skills and this task highlights this and helps to refine some life long skills.

The teaching on Mondays ends at 11:30 because after lunch the children participate in “Les Temps d’Activitiés Périscolaires (TAP), which is extra curricular activities organised by personnel outwith the school and includes activities, such as sports, art and games.

Today, I am with the same class I was with yesterday but with their other teacher. It is interesting to see how the children behave differently for the two teachers, as today, the children are being very talkative and the seating arrangement has had to be changed.

From a personal perspective, I am struggling to reflect upon the day because I am not given anything to do in the classroom or actively participating throughout the day. I have tried to share my thoughts and ideas for lessons on English vocabulary or Scotland but I am struggling due to the language barrier and I am worried that the teachers do not think I can teach the children because my level of French is not sufficient. I ended up contacting Susan for some advice on this, as I am keen to play a bigger role in the classroom but I am unsure how to approach this any other way than I already have. She has advised me to speak with Nina and Nina has ensured me that she will contact the school on my behalf in an attempt to overcome the language barrier. This was great feedback from both of them and I am glad I took this step, as I want to make sure that I am getting the most out of this incredible opportunity and developing my own practical skills as opposed to merely observing and recording.

Today, I spoke briefly to the head teacher about taking a more active role in teaching the children. She agreed that it was too much for me to continue observing for the rest of my placement, however, she did seem concerned by the language barrier. This has motivated me to practice and use French more rather than relying on the teachers speaking English to me. I am not confidant using French though hopefully the more that I use it, the more I will improve. Equally, the more that the teachers will believe I can pursue a more active role.

I have also realised that I can use some of other communication skills that I have to overcome this language barrier. For example, I can write down my thoughts and exploit visual aids to express my ideas to the teachers. Today, I have made resources that I think I can use in the classroom that I will show to the head teacher in an attempt to put forward my ideas to her.

Today, I was in the CM1/CM2 class. This was a half-day so most of the teaching time was consumed with French and Maths. However, I did get to see an example of the partnerships the school has formed with the local community, as the children had a session outside in the garden where they planted fruits and vegetables with a local volunteer. I was also given an insight into how the teachers at this school teach English, as the teacher I was observing showed me her guidebook that she works from when she is planning English lessons. This book outlined topics and lessons in a very thorough and structured manner and had excellent resources, such as worksheets and storybooks to complement the lessons. However, this type of teaching, for me, felt very prescribed, with little opportunity for personalisation and choice, which is one of the seven design principles of Scotland’s Curriculum for Excellence.

Today, I observed and participated in two new classes, which gave me the opportunity to introduce myself again to these children. In the first class, the children also got to ask me some questions, giving me the opportunity to help them with their grammar when they formed a question. As I introduced myself I used some proper nouns, such as my name, my brother’s name and the city of Dundee. This was the first time the children had heard Dundee and so I had to teach them the spelling of the word. They were also confused by the way I spelt my brother Michael’s name, as they had spelt it as “Mikael” due to the way it sounds. This highlighted to me some of the phonetic challenges that arise when learning to speak a new language that has different sounds from your native language.

In the afternoon, I visited CE1/CE2 where I introduced myself and answered questions from the children completely in French. This was challenging for me but definitely good practice. This particular teacher explained to me how little English she and the children spoke, but expressed a keen interest in me teaching them English over the coming weeks, which is hopeful for my progression.

As for the development of my knowledge of the French curriculum, I observed a history lesson. This lesson was about the French Revolution and the formation of the third Republic. This is an important part of modern French history and its significance in the curriculum was, I felt, very similar to the significance of Scotland and her own history in the Scottish curriculum. 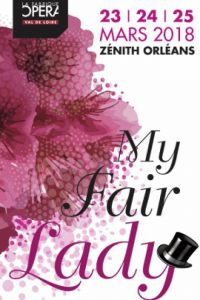 After school, I was invited to the Zenith theatre in Orléans with the school to see “My Fair Lady”. The show was excellent and I had a great time. I had never seen the show before and despite it being in French, the songs were sung in English and I was able to follow the story. I also though that this was an excellent opportunity for me to bond more personally with the children outside of the classroom environment as I chatted to them and asked them questions using a mixture of French and English. Upon reflection, I feel that experiences like these are invaluable to the children involved as they continually expand a child’s cultural experiences in an active way.

Today, I was asked to assist in an English lesson at the local high school, “college Concerdet”, which is the next school up from the children I have been working with at “école Bel-Air”. We were asked to the school by an English teacher named Sophie, who wanted her children to learn about Scotland and receive some help with their English from native English speakers. Erynn and I helped out in two classes that morning, “quatrième (3rd year)” and “sixème (1st year)”.

In the first class, the children were continuing the work they had started on Tuesday when Briony and Beth visited. This work was about Shakespeare and his life. The element of the English language that they were focusing on in this lesson was question formation as they were tasked with creating a dialogue between Shakespeare and an interviewer.

There were common issues and mistakes arising across the class, such as issues with the word order when forming a question and forming the questions in the correct tense. I was able to go around the classroom and assist the children with these issues much more easily than I could in the primary school, as the teacher had requested that we spoke to them completely in English and that they responded to us in English as well. I really enjoyed helping the students as I could witness the improvements in their English happening right in front of me, which was very rewarding. I also have not had many opportunities to assist pupils with their work because of the language barrier so I really embraced this opportunity to teach.

One thing I did observe was that the class was very reluctant to speak English in the classroom, as perhaps they were too embarrassed or scared that they would make a mistake. Often, Sophie would have to discourage pupils from laughing at other students’ mistakes or mispronunciations, as this could have a detrimental impact on their self-esteem. The attitude of the class was a stark contrast from the attitude towards language present in the primary school, as the children there relish every opportunity to speak to me in English. It would be interesting from a professional perspective to research this in more depth and try to understand why this decrease in language confidence happens as it is something that may affect the pupils that I teach in the future.

In summary, this week has been quite up and down. I am definitely seeing the benefit of observing fully qualified teachers to learn from their actions and experience. However, I am keen to fulfil more of an active role in the school day and feel a part of the school, though this is difficult with the current language barrier.