Maths is literally everywhere in our daily lives so no, there is no escape!  We use it almost constantly and I for one, was not always aware of that. From things I do everyday without thinking to calculations in my Discovering Mathematics elective.  For example, I look at the clock immediately after waking up in the morning (so to think I actually do maths at 6.30am is pretty impressive for me!) and I do the shopping and work to a budget every week which tests my mental maths.  Even fun things I do with my youngest child Carly who was 3 in October involves maths.  We count the stairs in the house when going up them or coming down them, we sing rhymes that involve numbers like ‘5 little monkeys jumping on the bed’, ‘5 little ducks went swimming one day’, and ‘1, 2, 3, 4, 5, once I caught a fish alive’ to name a few of our favourites!  I cook, measure and sometimes weigh during cooking which are all concept of mathematics.

One thing that used to baffle me (and still does slightly!) was when trying to figure out how long to roast a fresh chicken for in the oven.  Instructions:  allow 20 mins per 454g/1lb plus 20 mins extra.  Erm…….what??!  All I can say is thank heavens for ‘roast in the bag’ and ‘pre-cooked, ready to eat’!  (Although my understanding has somewhat improved since then – honest!)

Mathematics play a part in each of these everyday life activities and also in many others.  It is important we have a good understanding to enable us to make sense of all the numbers and problems life will throw at us! 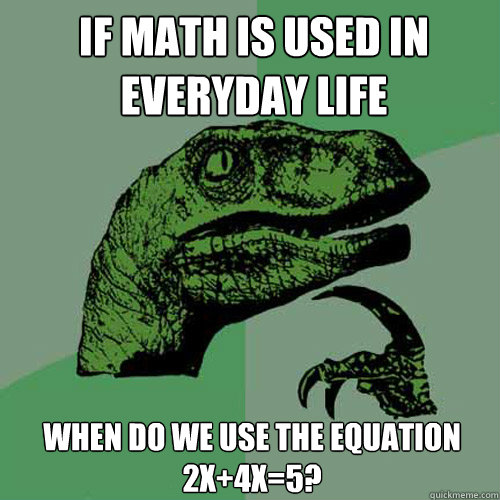 Maths!!  I suppose you could say it’s a bit like marmite; you either love it or hate it!  It can put the fear of God into some people and evoke feelings of happiness and pure fulfilment in others.  Me?  I am probably somewhere in the middle of the both of them.

I remember Maths from about Primary 3.  I attended Lenzie Moss PS having just moved from Carlogie PS in Carnoustie and was placed in a pleasant class with a pleasant teacher.  Maths was working through the red SPMG workbook. My teacher would mark with a large dot where I was to work to.  I LOVED it!; the maths, the workbook; the sense of achievement I felt reaching that dot and the teacher then marking my work and dotting a further section for me to attempt; the page of ticks as I’d gotten most of the answers correct.

But that was a long time ago! 1985 to be more accurate and a lot has changed since then.  The maths got harder and harder and I ended up sort of falling out of love with it a little bit.  Don’t get me wrong, I still LIKE doing maths but I know the feeling is definitely not mutual; maths does not like me!  Because quite frankly, I consider myself no longer very good at it.  I managed to scrape a pass at ‘foundie’ level during high school and didn’t really partake in maths as such after leaving – until I decided that a career in teaching was for me.  Requirements for university entry?  Intermediate 2 level at grade C or above.  Ssssssssssssigh!!!  It took me 2 attempts, working my butt off but my efforts were rewarded and I gained a B grade pass for my blood, sweat and tears.  No mean feat I’ll tell you!

So, even though I like Maths a medium sized bit more than it likes me, I chose it as my elective.  I hope to change its feelings of unrequited love and be more than just adequate in learning (and now teaching) the subject.  I want to feel confident that I know how to solve mathematical problems and be able to achieve my primary 3 feeling of achievement and joy at doing so.  I want to be able to make my pupils experience that sense of excitement at broaching the subject.  And through my sense of anxiety at Maths I am more able to understand how children are feeling towards it if they struggle and I will use this in a positive way to ensure I am a supportive teacher who strives to meet the needs of her class.

There are so many people in the world, all with differing views on the purpose of education.  My view is that I believe the role of education is first and foremost, the way to provide a learning experience for all children which is equal to all regardless of their gender, religion race or social class.

I believe that the ethos of the school is an integral aspect of education and how the environment created within the school can include all learners regardless of ability.  Schools and its teachers must show an appropriate level of understanding towards discipline and the way in which behaviour is managed which is essential for the smooth and fair running of the school.  Showing a range of teaching methods across the different curricular areas is an effective way to promote simulating lessons which encourage learning.

But I believe that education is much more than just a level of attainment, achieving grades and enhancing learning.  It is also about supporting the needs of the pupils emotionally and encouraging them to become socialised within society ensuring the all-round enhancement of an individual.

The role of the teacher is to teach all children the norms and values of their society and culture in which they live.  Teachers are to guide children and young people on their journey to become successful learners, confident individuals, responsible citizens and effective contributors in all aspects of their lives.  Teachers should be able to provide a learning environment which is both interesting and stimulating, piquing the curiosity and eagerness of each child as an individual, encouraging them to not only progress in their learning but to want to learn and progress also.  This is the kind of teacher I want to become during my teaching journey.

I am Lesleigh McAdam in the University of Dundee studying for an MA (Hons) in Education.  I arrived here following a long and wynding journey of trials and tribulations, note taking and sitting exams.  As a parent, I have a natural interest in the education of children and my ambitions to become a teacher came to the forefront as my son, now twelve, began nursery ten years ago.

It had been a long time since I had attended school in a student capacity but after contemplating my options in my choice of career, the only way forward was to apply to college which would enable to me gain qualifications in higher education; something I greatly wish I had fulfilled previous to leaving high school.  I gained some experience working with children within the primary school environment acting as a voluntary parent helper standing me in good stead for my offered place at Dundee and Angus College on the course Access to Teaching.

Making the move from paid employment to return to being a student was as scary and challenging as it was exhilarating.  I was able to enjoy a variety of lessons and quickly embraced the student life; learning new, interesting areas of study I had previously unheard of.  Throwing myself in wholeheartedly encouraged me to venture out of my introvert shell slowly but surely, getting through the work; attending an interview with Dundee University to study in BEd Education and before I knew it the year had passed.  Unfortunately, due to illness during the year I had missed a chunk of the learning and did not gain the qualifications needed to gain entry to BEd Education and so with a heavy heart I had no choice but to decline my place.

Deciding that I would apply again the following year, I returned to college on the Access to Highers intent on resitting maths intermediate two and to complete communication 4 literature 1 instead of struggling with higher English a second time.  I knuckled down and studied so hard for maths, my efforts being rewarded when I passed my exam and exceeded my expectations of the grade I earned.  Unfortunately, my interview at the university did not go so well the second time round and I was unsuccessful in my venture.  Feeling a little defeated I wondered if my ambition to make teaching my career was beyond my reach.

With a little encouragement from supportive family and friends I decided that I would apply to Dundee University a third and final time thinking if I was unsuccessful again then it was not meant to be.  I again returned to college, gained an HNC in Social Science however, following the Christmas break I discovered I was pregnant with my daughter, Carly now two and with my due date being October 2012 saw a gap year out was my only option.

After Carly’s arrival I threw myself into motherhood for a second time.  As soon as I was able, I applied to complete my HND in Social Science, luckily being accepted immediately.  Juggling further education with a baby was not easy but with plenty of support from all angles I kept my head above water.  Once again, the application to the university was submitted, this time for the MA (Hons) Education course.  I was fully prepared with my presentation ready but was a bundle of nerves.  Reminding myself that this was my last chance I pushed down the butterflies and gave it my best shot.  It went ok I thought.  Fingers crossed.

Less than a week later, I received my unconditional offer to study on the above course and could not have been happier.  It was a place I never thought I would be in and to find myself attending lectures, tutorials and workshops still evokes mild disbelief that I made it.  Finally.

I shall aspire to be the best I can be, to be confident in my knowledge and understanding allowing me to make informed and confident decisions regarding the education of children and encourage their inquisitive and eager minds so that they might flourish and succeed in their lifelong journey.