I have never considered in depth the mathematical concepts that underpin sports. The scoring is about the only maths I can think of. However when given the task to create a new sport or update an existing one, I found that maths was key to making the game more challenging and exciting.

Our table looked at netball and how we could make some changes to make the game more intense and exciting to watch. The first observation we made was about the scoring, and how high the scoreboards can reach. It is a lot easier to score a goal in netball than it is in football, and the difference between the scores is never big. Compare this to a game of football were a score of 2-1 can be incredibly tense near the end of match, and in netball this difference can easily be equalled by the score of another goal within 2 minutes. Basically, scoring in netball is a lot easier to achieve compared to football and this is something we wanted to change. 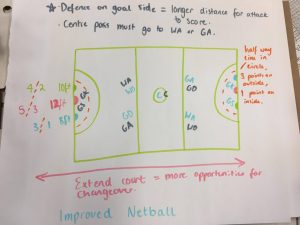 Firstly, to make it harder to score points quickly, we made the length of the court bigger. This means that players will have to travel further in order to reach the nets to be able to score. Secondly we changed the layout of the hoops. We added in an extra two hoops and positioned them at different heights, to give players the opportunity to score more or less points when shooting through particular hoops. This adds more challenge into the game and will force players to make split second decisions on the court as to which hoop they are going to aim for. Lastly, we introduced a rule that meant you have to defend on the goal side. This means that players can’t immediately go to their goal, they have to take it up the court before coming back down and scoring. This will increase the challenge posed to the players and make scoring a lot more intense.

These applications of maths, length, height and position all helped us to improve the game and make it more intense to watch. This has made me realise that maths can be applied in any situation and can improve it on many occasions. Maths is everywhere!