Not only does Scientific Literacy mean having an understanding of science, b

ut also being able to form questions and conclusions from the evidence found through experiments (Organisation for Economic Co-operation and Development, 2003). Over all, Scientific Literacy means that children understand the words used in science, the process of experiments, why the experiments are being carried out, can come up with their thoughts about the outcomes, and also why it is important that they know this for everyday life. This directly links to some key principles in the Curriculum for Excellence (Education Scotland, 2016). Teachers must ensure that when they are teaching science their pupils are not simply just learning the terms like they may learn a times-table. In order to be Science Literate, the children must understand the depth of what they are learning.

A lack of scientific literacy could mean the development of false scientific conclusions. One of the main examples of this was the MMR vaccine scare. In 1998 an investigation into the three in one vaccine for measles was conducted by, the now discredited, Andrew Wakefield. He came to the conclusion that that vaccine could actually increase a child’s chance of developing autism. This research was released and caused fear in parents who then became hesitant to allow their children to receive the vaccine. It wasn’t until 2004 that an investigation into

Wakefield’s research took place and it was found to be flawed. The medical records of the children he investigated did not match his research and the paper he published was taken  down.

This is a clear example of how important science literacy is. This spread of false information caused the vaccine rates to drop dramatically and a significant increases in measles, causing many children to suffer unnecessarily. New research found that there was no connection between and vaccine and autism and there are no side effects to the vaccine. However, some parents are still wary of the vaccine and refuse to allow their children to receive it.

The process of fair testing is ensuring there are no deliberate advantages or disadvantages to any variables in an experiment (or, to any pupils in a school!). This ensures that the information gathered is reliable. To guarantee reliability any obvious advantages to any factors are controlled.

An example of this is how high a ball bounces (Prain, 2007). The height of the bounce the ball executes is measured, however the following things are considered: 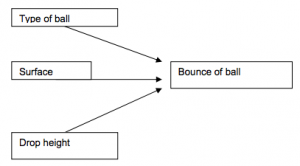 This TDT was written by –

AC1 – Rachel Allan – Explanation of the concept of scientific literacy.

AC2 – Catriona Mcphaden –  Analysis of an example where a lack of scientific literacy has led to inaccurate media reporting.

AC3 –  Myself – Discussion of how teaching fair testing in school science links to scientific literacy.