Describing my friendship group growing up almost resembled telling one of those jokes your Dad tells of an Englishmen, Scotsman and an Irishman walking into a bar. There we were: a black friend, a Muslim friend, a lesbian and a wheelchair user. It was like diversity Pokemon and we had collected them all.

Jokes aside, I don’t think I have ever fully appreciated how special it is to have such a diverse group of friends and having been able to experience such unique perspectives. It is extremely rare to have a variety like this, especially considering we lived in a town consisting of mostly White British people and we all attended catholic school where there was not much diversity in terms of faith. To be honest, until watching this week’s module material it hadn’t really clicked for me how rare it is to have an insight into each of their individual perspectives.

This week’s learning particularly focused on disability and the social model which was a real eye opener for me. Having grown up with one of my best friends, Laura, who is a wheelchair user and has brittle bones, I already felt much more aware than most others when it came to disability. Although I have been exposed to the world of disability from Laura’s perspective since I was in primary one, I do not feel that I appreciated what that meant. I had always seen Laura as my friend rather than a wheelchair user to the point I was not even aware of what her particular disability was until at least 10 years into the friendship. In many ways I think that that is great. The fact I saw Laura as an equal and no different from my other able bodied friends is how it should be.

There is an amazing amount of adaptations that can be made in today’s society in order to make the disabled less disabled. Such simple additions to buildings like ramps and lifts or signs in braille makes the world that much more accessible for those who need it. I have seen it first hand through Laura’s adapted car, for example, which gives her so much freedom, especially considering she lives in the countryside. Plus, she always offers to pick us all up since it’s easier for her to get parking than it is us – her words not mine. 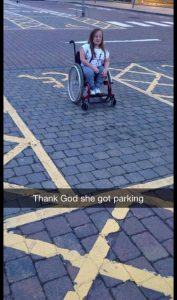 As easy as it is to make jokes at the pros of the disabled badge when it comes to the car park, I am certain there are a large number of adversities and struggles Laura has had to face that I can barely even begin to understand. From my perspective Laura has never been affronted by her impairment and has never been stopped doing anything she set out to do. She is currently a swimmer for the Scotland para swim team – Laura is unstoppable in my eyes. She is never one to complain but looking back on our years of friendship I know there has been harder times for her. From physical injuries such as easily broken bones to the discrimination she felt when she moved to university. I really hope that the social model way of thinking allows the world to be a more and more understanding, accepting and accessible place for everyone.

I am guilty of it.

The values module has really had me thinking about bias, more importantly the unconscious bias which we all hold to some degree. I never considered myself a homophobe, especially considering the fact that I am gay. However, my way of thinking has since been challenged. This video shown in one of our earlier inputs highlights the point of ingrained homophobia in us all.

The particular part of the video where Panti Noble discusses how society causes us all to be unconsciously homophobic in our thoughts or actions has allowed me to realise how this applies to my own life. We are all guilty of it. I can easily recall a time where I have looked at someone who I would assume to be a stereotypical gay or lesbian and automatically categorise them as that. Think about the last time you saw a flamboyant man and thought “he’s so gay!” It’s hard not to, right? It is deeply ingrained into us all. As much as I know that this is wrong, I still struggle to break out of this way of thinking. Every day I try and stop myself thinking in this old-fashioned mindset. The mindset that would have me think “she is too pretty to be a lesbian” or simply pointing out the sexuality of someone as if it is an important aspect of who they are.

My fellow education student, Blaze, captures it perfectly in her blog post. Highlighting the absolute absurdness of people having to “come out”. When was the last time a straight person had to announce to every important person in their lives that they are attracted to the opposite sex? Or when was the last time a heterosexual person could feel their heart pounding out of their chest at the thought of slipping into conversation that they are straight? Though I understand the argument that heterosexuality is the norm and that everyone is assumed to be straight and therefore there is no need to come out, I don’t think this means it is right. I believe we need to stop assuming the sexuality of our children. Why are we making people announce their sexual preference?

I am envious; I am frustrated; I am gay.

Every single time I meet a new person, I have to think to myself, “how will I tell them? When will I come out?” as though I have some big dirty secret. Like I’m about to announce I’ve murdered someone or that I am, god forbid, a vegan. My straight friends simply cannot relate to that. They have never felt the fear of being rejected for who they love. They never have to consider if they are going to be safe when they go to a foreign country, or if they are even going to be illegal there. Imagine that, being illegal. They didn’t have to be reminded in school that they were sinning and reminded of very selective parts of the bible. I cannot wait for the day I don’t feel that way or I don’t have to fear being judged for something that is ultimately a small part of who I am as a person. I am so much more than my sexuality.

I do recognise that as a LGBT+ person, my experience of “coming out” could have been much harder and much worse, I am very fortunate in that sense. People often ask me when I came out but the reality is that I have to come out every day. You are never really “out”. There is always a new person you need to break the news to, whether that be friends, family or colleagues.

Once again, I am lucky. I have never received any homophobia in a physical sense. I can cope with a confused or judgemental stare from a stranger when I hold my girlfriend’s hand in public. However, the homophobia that hurts me most is the remarks or questions that people don’t even perceive to be homophobic. “You don’t look like a lesbian, you look normal!” I am not sure what a lesbian is supposed to look like – I did not receive the official uniform when I joined the club unfortunately. I am baffled by statements like that, do people not think about how bizarre these things sound?

I feel like we still have a long way to come but once we can start to acknowledge our prejudices and where our unconscious bias lies, we can begin to move past this as a society.

Prior to this week’s input on racism, I felt as though I was already very aware of the discrimination felt in todays modern society. The lessons did, in fact, showcase the disgusting acts of violence that have occurred in the past towards people of colour. Stories about Rosa Parks and Martin Luther King Jr. were told however more examples were added that I was not previously aware of. Examples such as the murder of Emmett Till strengthened my understanding of the hate crimes that occurred in the past.

In addition to this, we were shown images and examples of racism in our home country, the UK. Although racism obviously occurs here as well, it is much more often that I hear of racism in countries such as the United States of America. It was very interesting to realise that these stories are not just news articles from far away countries but in fact strike close to home and are still incredibly relevant in 2017 Britain. I had not previously read about the racist slogan used by a politician in the 1960 election for example.

The video clip of Charlottesville, USA, attached below truly opened my eyes to the hate crimes occurring to this day. For me, it can be easy to think of this degree of hatred and racism to be a thing of the past but the horrific scenes shown this year made me much more aware. It is bizarre to see that such backwards white supremacist groups such as the KKK still exist and operate in the modern world. It is disgusting to this there are people in this day in age that cannot see the world from a more open-minded perspective. It saddens me to see that in 2017, there are still groups of people out there that feel that other human beings are lesser due to the colour of their skin.

As a white person, racism is not something I typically have to deal with and due to that I feel as though I can never completely comprehend the way it feels to be faced by that level of discrimination in everyday life. In the reading material for this week’s input, the below TED talk was attached. I found this video particularly interesting as it gave an insight into the life of a black man growing up in America, which very much contrasted that of my experience in Scotland. The way he talks about not being able to “act the same as his white friends” is upsetting and an idea I had never had to think about previously. It’s as though I am sometimes ignorant to the struggles faced by other races as I do not have to face them myself. I am hopeful that with groups such as the Black Lives Matter movement that change will come and that racism and discrimination will one day be a thing of the past.