The other day in Discovering Mathematics we were learning how to incorporate outdoor learning with Maths, but not your typical kind of maths (numbers and sums). Will asked us to discuss how everyday objects, buildings and activities involve maths. For example, a building site – the maths needed to measure the size of parts needed, the machines needed to carry the weights, the way in which the building is built, the design of the building itself… it all is centred around maths!

We then moved on to focus on maps and map skills, something I am completely rubbish at. I realise now how important having a basic knowledge of how to read a map and how to work a compass is, and why children should be learning this in school. It is also something you can do outdoors! Something that is encouraged in Curriculum for Excellence and of course that children love doing.

To practise, we were given the task to draw the classroom we were in as a map from above. 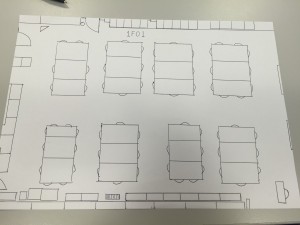 Later in the lesson, we were given another task to create a resource or a lesson based on maps and using maths/maps skills. I decided to use my drawing of the map of the classroom as I was pretty proud of it!

In partners, we decided to use the map as a kind of treasure hunt. We were going to hide clues in different places in the classroom and mark these on the map given. The children would then have to figure out where in the classroom the clues were by adjusting and associating themselves with the map. Once they got the clue, which is actually a puzzle (or anything along those lines), they must figure it out. Once they have the answer, they return to their base point and add answer to chart. (Returning to base point is a very basic but extremely important factor with orienteering as it ensures that you never get lost and keep an eye on your surroundings).

Here was our notes for the task… 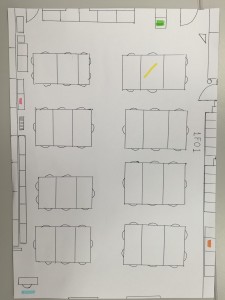 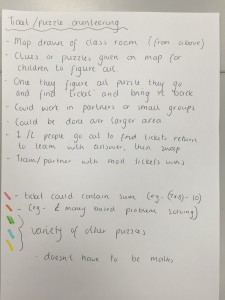 Before hand, I would probably introduce the idea of maps to the children. Possibly get them to draw their own maps, of their bedrooms, living room, their classroom etc. This ensures they will get the gist of reading this type of map. This is a fun activity and can be used as a follow up activity of possibly some textbook work, or as an initial activity of which you can follow up on. Either way its incorporating maths with an activity that doesn’t feel necessarily like maths, and makes it fun for everyone involved by actively learning.