This week in Digital Technologies, we were looking at animation. At the beginning of the session, we were asked to explore the Puppet Pals app on the iPads and create a short animation that was based on a fairy tale. We were to include; voice recording, movement, to change the size of the characters and include a beginning, middle and end. Our lecturer then used the AiFL teaching strategy of fist to 5 to gage our progress.

Animation is the process of the stringing together of a sequence of static images so that they appear to move (Jarvis, 2015).There are 5 main types of animation, according to Moving Image Education, including cutout, stop motion, pixillation, drawn and computer. Moving Image Education also states that animation breathes new life into something that normally doesn’t move.

Animation is a form of technology that I am familiar with through films and television, however I have never created an animation and it is an element I am not confident with. Beauchamp (2012) highlights that although teachers might be worried about new technologies, we need to ensure that this fear is not transferred to the children or that any obstacles are put in the way of their curiosity or willingness to learn about new technologies. Whilst animation can be used to enhance learning through enhancing learner’s visual representations, illustrating processes and provide an interactive element (Betrancourt, 2005), Jarvis (2015) argues that while it can enhance the quality of information processing and learning, it can be very time consuming. Some examples of how to combat timing and confidence problems can consist of; getting equipment set up before the children arrive in the classroom, use the word explore often, as the teacher have a level of understanding yourself and be willing to engage within technologies that are new to you.

The rest of the session was used to create our own animation through an app on the iPad. We first watched a couple of tutorial videos to allow us to gain a deeper understanding of how the app worked before starting to work on our own. Using the technique of onion… I found it easier to create my animation as I could see where the last still image was. My video was based on Goldilocks and the 3 Bears, who went for a walk in the woods and found an Irn Bru bottle. Having completed the process, I was able to realise how time consuming making an animation can be. During a classroom setting, it could take up quite a few lessons. Beauchamp (2012) explains that ICT is not viewed as a separate ‘subject’ but something that contributes to all areas of learning. This is extremely useful when planning lessons as it means that a range of CfE experiences and outcomes can be covered within one lesson. A quote which I feel would be useful in explaining animation to pupils comes from John Challis on Moving Image Education website, ” Good animation is like a raisin sponge cake; you can get away with a lot of minimalism (sponge) as long as you reward your audience occasionally with tasty dynamic bits (raisins).” 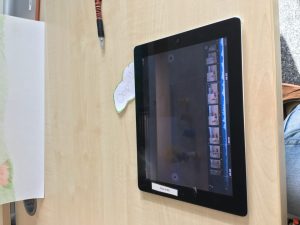 Jarvis, M. (2015) Brilliant Ideas for Using ICT in the Classroom: A Very practical Guide for Teachers and Lecturers. Routledge.