So, todays workshop surrounded the idea of taking our developing skill as an ‘effective communicator’ into more environments rather than just the lecture theatre. As a primary school teacher, this will involve – speaking to children, parent/caregivers, other members of staff, people in different authorities, people within the community, the list goes on… so its vital that we build up the confidence, professionalism and energy to be able to do this on a day-to-day basis.

We were given minimal resources and as a team we were to build a den using communication to make sure it fitted the task aim. Here is a picture of our den (it did look much better in person, I promise) 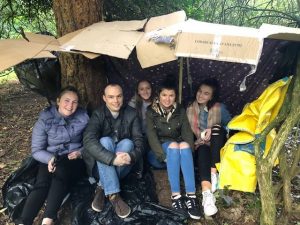 Reflection of the Task