Today was the first session of our new module ‘Integrated Arts in Education’. Firstly, our lecture was an introduction to this module where we were given an insight into what we can learn from the integrated arts. Throughout the twelve sessions we will be exploring art, music, drama and dance, focussing on two of these arts per session. Today, we were introduced to Art and music.

In our first Art input we were in the University’s Art studio where various pieces of artwork were spread across three separate tables, each table displayed a different stage of pupils work ranging from Primary 1 to Primary 7. We were encouraged to look around and consider each piece of art. Something that stood out to me was that there was a vast difference between the work produced by the lower primary classes in comparison to that by the upper primary classes, understandably the work produced by a primary 7 pupil showed greater skill and precision however I was saddened by the realisation that over the years the work began to lack freedom and the ability to create whatever the pupils wanted. It was obvious that at lower level the pupils were given freedom with their pencil / paintbrush to create whatever they felt like but the older pupils were perhaps told what to do or given something to copy.

We were given the opportunity to discuss what stage of work we liked the best, I chose the lower level work as I liked how there was greater freedom with colour, patterns, detail etc. This exercise showed me that as a student teacher it is important to allow pupils to be as creative as they like and allow them to be imaginative while also expanding their skills in art. 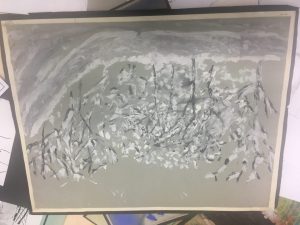 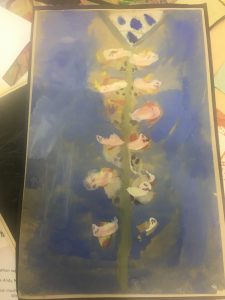 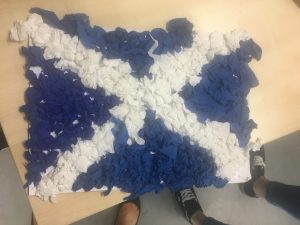 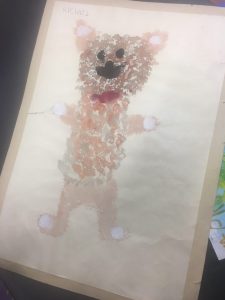 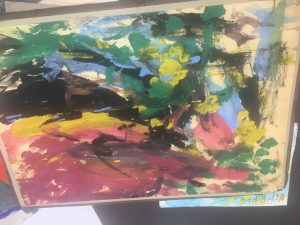 The first thing we focussed on in todays music input was how music affects our moods. In order to explore this thought, various different pieces of music were played and we wrote down the feeling that they gave us. This allowed me to realise the impact that music has on our lives as it can completely change your mood depending on what you are listening to.
We then moved on to musical appreciation with literacy by listening to a piece of music and imagining a story to go with it, from this we then created a storyboard in groups. This showed me how cross curricular teaching music can be by bringing in a range of subjects, music, art and literacy. The idea our group thought of was a circus theme, with each part of the music representing a different circus act. Each group had came up with a different concept which showed how listening to music can provoke your imagination.

Overall, our first input was extremely engaging and has made me excited to continue the module.