Today our lecture was focussing on using stimulus as inspiration for creation-child centred approach. We had Art and Dance inputs. 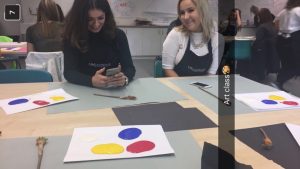 In todays art input we were painting with primary colours using unconventional paintbrushes. At first, I thought that painting using paintbrushes that weren’t the type I was used to would not turn out well. However, i could clearly see the benefit of doing this with a class of children as everyones brush was different which meant that it was understandable when each piece of work looked a different way. This would result in children not feeling under as much pressure to produce a piece of work that they felt was as good as their peers. It teaches children that they can paint with anything, if they do not have a traditional paintbrush they can make one out of materials they do have. It also made the lesson more unique and interesting which promoted enjoyment.

Using only the primary colours yellow, blue and red was also beneficial as it meant that you were forced to create your own colours by mixing them together which encourages creativity. 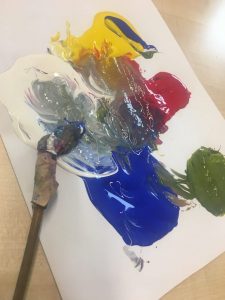 Our lecturer read us a story detailing a scene with various different attributes. We then interpreted this story into our own painting. This was a very good method as each painting was different by each individual imagining the scene differently. It means that each piece of work is on the same topic yet has its own individual creative touch. 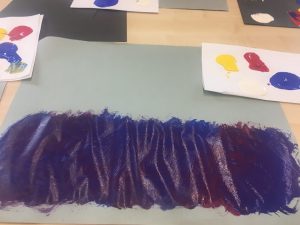 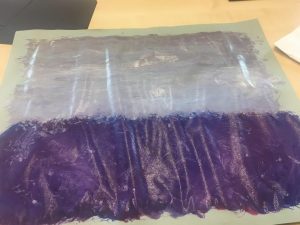 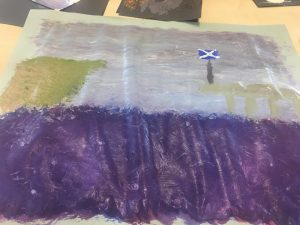 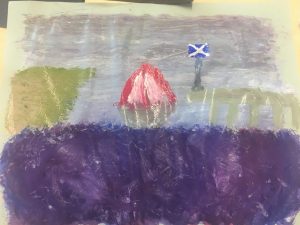 Today in our dance input we were progressing from our work last week. Each group presented the dance moves they came up with relating to the different halloween themed pictures and they were then all put together to form a part of the dance routine. We also put together our group routines that were formed from the 10 skills of dance and added on new moves. These new moves were made up as we were given a list of dance terms which we had to guess the meaning of. This was good as we weren’t confined to doing the proper dance moves and were allowed to be create and make up our own versions of what we thought they were. All of this was put together into a class routine to the song ‘Ghostbusters’. This highlighted how the pupils can be the ones to come up with the routine instead of the teacher which would make the experience more enjoyable for them as they would feel more control and creativity.

“One of the most powerful experiences dance educators can offer is the opportunity to create a dance that reflects their ideas.” (Cone, 2009).