Scientific literacy is becoming a prominent feature within education. In the Science Principles and Practice section of the Curriculum for Excellence (CfE) (2010) there is an emphasis on this area and that we, as teachers, should be developing scientific literacy within our pupils.

The knowledge of scientific literacy is extremely important, especially when you look at examples of when the lack of knowledge has been proven to be dangerous in society. In 1998, a doctor named Andrew Wakefield released a paper on the research he had been doing about the link between the MMR vaccine and autism. As this research was released by an extremely respected medical journal, Lancet, editors and members of the public started to panic. Suddenly anti-MMR stories started to be printed by many other newspapers as people were coming forward with their stories. The country began to think they had been lied to by the medical authorities and turned to the government for reassurance. The press asked the Prime Minister at the time, Tony Blair, what his thoughts on the vaccine were and if he would give it to his son, Leo. He refused to answer and this lead to many stories on the MMR scare being about his son in 2002. Thankfully, an investigation in 2004 led to Lancet coming forward and admitting that the research by Andrew Wakefield was improper and inaccurate. Unfortunately, even after all of this, people still doubted the vaccine and this is all down to the lack in knowledge of scientific literacy. If the public had been scientifically literate, they would have been able to analyse the article and realise for themselves that it was based on inaccurate research and was an unfair experiment. Therefore, it is important to teach scientific literacy within school, through teaching things like fair testing.

Fair testing in science is the process of carrying out a controlled investigation in order to answer a scientific question. Children need to understand that a test is only fair if only one variable is changed during the experiment. Pupils will experiment in science the whole way through school. Therefore, they will develop their skills and knowledge of fair testing and why it is important. It is essential that teachers understand fair testing themselves so as to explain the terminology and concepts of a scientific experiment to pupils. (The School Run, 2018). Scientific literacy is not knowing lots of scientific facts. It is instead an understanding of how science actually works. It is important for children to have good scientific literacy as they progress through school and into further life. Practicing fair testing during school will help them explore science rather than simply learn and retain facts. It is therefore essential as pupils will learn the proper ways to test in science and will be encouraged to answer questions and discover for themselves. Using fair testing through experimentation could create a more positive attitude towards science and improve pupils’ scientific literacy through enjoyment (Durant, J. 1994).

Thus, a focus upon scientific literacy must be emphasised within schools to ensure a new generation of scientifically literate children who do not believe everything they read. This can be done through teaching fair testing and making science relevant to real life.

The Scottish Government (2010) Curriculum for Excellence: Sciences principles and practice. Available at: https://education.gov.scot/Documents/sciences-pp.pdf(Accessed on: 8th February 2018) 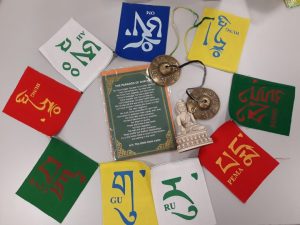 “What have you learned during the RME inputs?”

When faced with this question I was not 100% certain what I had learnt, until I had todays input. It’s all about the child’s understanding behind religions and their personal journey to find that.

I realised this today after getting to see and touch artefacts related to various areas of RME, including those from the picture at the top. It really made me realise that having objects engages children much more as they can put a visual to what you are saying, additionally gaining more of an understanding.

But you cannot just have the objects alone, there needs to be discussion surrounding them, such as what do you think the object is used for? how do you think we should handle them? These open questions are allowing the children to think deeper leading to a better understanding which is, ultimately, what I would set out to achieve.

Overall, I am much more confident in teaching RME to children and I do not think I will ever know everything to do with all religions! But that’s okay, I think sometimes learning with the children allows them to understand that you are human too and that (as much as I think we find it hard to admit) teachers do not know everything!

Making those mistakes, researching and working with the children will, overall, lead to a more positive ethos within the classroom, helping with other areas of classroom and behaviour management.

Reflecting on this first semester I have realised that I, as a person, have changed professionally and personally.

I used to be quite an anxious person and found the thought of starting University quite daunting. But now, I am relishing in the fact that I am here, and I should be enjoying every moment! Which leads me onto my new lease for life, that I should not take everything as a knock back, treat everything as a new learning curve and a way to improve. A key element, I believe, for being a reflective teacher.

This new lease for life is a great value which I should try and instil in the children I teach and to make them aware that it is okay to make mistakes. I became aware of this new lease for life whilst doing the working together module. It made me understand that, sometimes, you need to make a few mistakes in order to get the best outcome and I was able to reflect upon this using Brookfleild’s lenses….something I will never forget and I will need to be an effective reflective teacher.

Being a reflective person was something that we were always told about from the beginning and was something which I did not truly understand and thought it was just something that we had to do. But, I understand now that to be a reflective teacher will not only benefit myself but also the children whom I teach, as they will not just be getting the same teaching style or resources all the time. I will change for the better therefore the children will too.

However, a key moment of professional reflection is through the values module. I was initially a bit sceptical about this module and did not understand how it would benefit me professionally. However, I now understand our own values need to be in the right place in order to teach children as we will be a role model for them and, hopefully, their own set of values. I was able to explore my own values and how these might relate to myself personally and professionally and what society makes of me. It was interesting and eye opening and made me realise the true extent to which my values go and the example I should be setting for children.

I will continue to reflect throughout my professional practice in order to become an effective reflective teacher.