Music has always been a special part of my life. Ever since I was born I have grown up surrounded in the wonderful world of music. My grandad was a trombone player, conductor and music teacher, my uncle is currently a professional trombone player for the RTE orchestra in Dublin and of course the biggest influences in my life; my mum a horn player and my dad a principle cornet player in a championship brass band. My whole childhood I was taken along to band practises, concerts and contests… I was always blown away by the talent of the people sat in front of me but sadly I never took an interest in playing an instrument myself, one of my biggest regrets! I always wonder “why?” but after seeing the time and commitment my parents had to put in, it must have put me off which is a shame because the reason they were so committed and hard-working, was because of the love and passion they had for playing music. “ Oh, well.. Jacqueline is the singer and dancer of the family” my mum always told her friends from band when they asked why I wasn’t playing an instrument yet. I really did love singing, oh and I can’t forget my attempt at playing (more like memorising) the keyboard for my higher music exam, they managed to bag me an A (I hope it was more the singing!), so I couldn’t have been too bad! I can’t forget the help my mum gave me with the theory either, she wouldn’t be happy if I never mentioned that!

So, even after having so many encounters with music, when I was told we had a lecture on maths and music, I questioned it. How much maths is there really in music? Well, a quote we were given in the lecture was a revelation! Connecting music and maths finally made sense to me:

“Rhythm depends on arithmetic, harmony draws from basic numerical relationships, and the development of musical themes reflects the world of symmetry and geometry.  As Stravinsky once said: “The musician should find in mathematics a study as useful to him as the learning of another language is to a poet.  Mathematics swims seductively just below the surface.”  (Marcus du Sautoy, 2011)

There are many connections:

Many of these actually have quite an obvious link with maths when you really think about it.

Another, perhaps less known, but important, link between maths and music is the ‘Fibonacci sequence’. The Fibonacci sequence is a special series of numbers formed by using the sum of the previous two numbers to get the next number within the sequence. The sequence looks like this: 0,1,1,2,3,5,8,13,21 and so on…

If we look at a piano keyboard we can see that the chromatic scale consists of 13 notes. The diatonic scale is composed of 8 notes and the pentatonic scale, 5 notes. In addition to this, the basic chord structures used in music consist of a triad of notes. These are the first, third and fifth notes in the common ‘diatonic’ scale.

I thoroughly enjoyed the mathematics and music workshop… firstly because it reminded me of my love for music but, more importantly, it taught me that something that I have been immersed in my whole life has, in fact, got a lot to do with music which I had never really thought about until that point! It made me consider all the other things in my life that probably has some sort of maths behind it that I haven’t discovered… yet! I am looking forward to teaching music in the future with enjoyable activities where the children can really see the impact maths has on music.

I know! two words you would never normally put together. Maths is usually a subject people associate with lessons that involve worksheet upon worksheet where your answer can either be right or wrong. Where is the fun in that? No wonder so many children hate maths when they are stuck doing the same boring lessons. But maths CAN be fun and creative! This was proven in the two workshops we had in the discovering mathematics module that focused on the creative side of maths.

Tessellations are a great for connecting maths and art together. Many historic paintings were made using tessellations and by showing some examples of these to a class, it would be a great way to engage the children in the lesson immediately. They probably wouldn’t even think it was a maths lesson! I thoroughly enjoyed this workshop and creating my own tessellation with Caitlin. Creating patterns with the different shapes and colours whilst also making sure everything fitted together perfectly was a fun challenge and is a lesson I will use in the future. It allows the children to fully experiment with 2D shapes instead of just looking at them in a textbook. 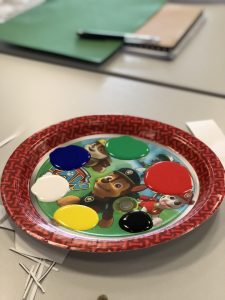 Getting into the child-like spirit with paw patrol plates and colourful paints! 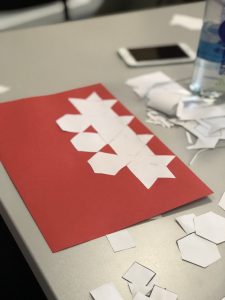 The beginning of our masterpiece! figuring out how we wanted our tessellation to fit together and what pattern we wanted it to create. 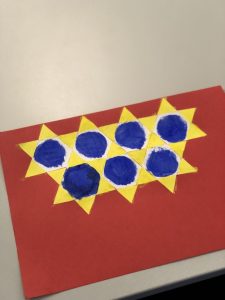 The final product! unfinished and not very neat.. but I love the way it would have been if we had more time to finish it.