Following a workshop this week on the concept of place value, I was inspired to write a blog post on the difficulties and complexities found in these seemingly simple, basic concepts of maths.

As someone who learned mathematics in a procedural fashion, it is very difficult for me to wrap my head around the concepts and understanding behind the maths itself. I therefore found this workshop very challenging when I had to look past the mathematics I have learned and replace it with concepts either made up or used in minority areas across the globe. A good example of this was when we had a look at our number base system…

This was something which I saw as a maths stater activity when I was out on placement. The teacher would ask the children to break down a number and to think of as many ways as possible to express it. This then helped the children as they moved onto their multiplication and division work (where the concept of exchanging is extremely important). I therefore think it is vital that when I go out to teach, I also touch on the theory and concepts behind the topic the children are working on.

It is also vital to use the correct terminology when teaching mathematical concepts like place value. Liping Ma (2010, p.37) explains that 86 percent of Chinese teachers made the change of saying “composing” or “decomposing” a number, rather than using the term “borrowing”. This mathematically makes more sense because when we do a sum like 32 – 15 we need to break the number 32 down to see how we can possibly take the number 5 away from 2. We are not simply “borrowing” but taking 10 units from the tens column. This is something I will take into consideration in my own teaching practice in the future.

Particularly for place value, I have found some great videos online which show how you can teach the concept to children. This is a great example of teaching place value and also using a child’s mistake to create a new learning opportunity:

The binary system – a great way to visualise place value!

As I feel I was not given the opportunity when I was younger to fully explore the idea of place value, it is difficult for me to see past a 10 base number system when using the concept of place value. In our workshop we were introduced to the most basic system – the binary system. The binary system is a system mainly used for computer systems and technology. A binary number is made up of only 0s and 1s (Mathsisfun.com, 2016). So, the way I explained it to myself, if the highest unit you can have is 1 then the number 2 must be 10, the number three 11, and the number 4 100. This took me a while to grasp as I just couldn’t imagine the hundreds, tens and units columns when working it out in my head. Luckily, we got given a spreadsheet that made the concept much easier to visualise, which was then when I managed to wrap my head around it. I have inserted a similar picture which helps to demonstrate this concept:

As you can see, the two base system (binary system) is at the bottom. This picture also gives you examples of what it would look like for other number base systems.

The discussion of a binary system also led to the discussion of a dozenal system. It is argued by many that this makes more mathematical sense than our 10 base number system. Some good examples can be found on the dozenal society website, including: packing/packaging (e.g. we get a dozen eggs), a clock dial is numbered 1-12, and the factors of 12 being more useful than the factors of 10 (Dozenalsociety.org.uk, 2017). This is something which really should get us thinking. I assumed that everything we learn in maths is what makes the most sense but this has highlighted to me the importance of questioning the concepts we learn as there could always be better ways…

An interesting argument for the 10 base system is that it is easier for learners to use their hands to help them count. However, as argued by Dvorsky (2013),  we have three separations on each finger, which if used separately would be extremely useful for counting using the dozenal system. If we use our thumb as a pointer, and start with the index finger we can work our way from the bottom of our index finger until we reach the number 12 (or 10) at the top of our pinky. This is difficult to explain without a visualisation so I have attached an illustration below. Using this system, gives us a total of 24 numbers to work with using just our hands! 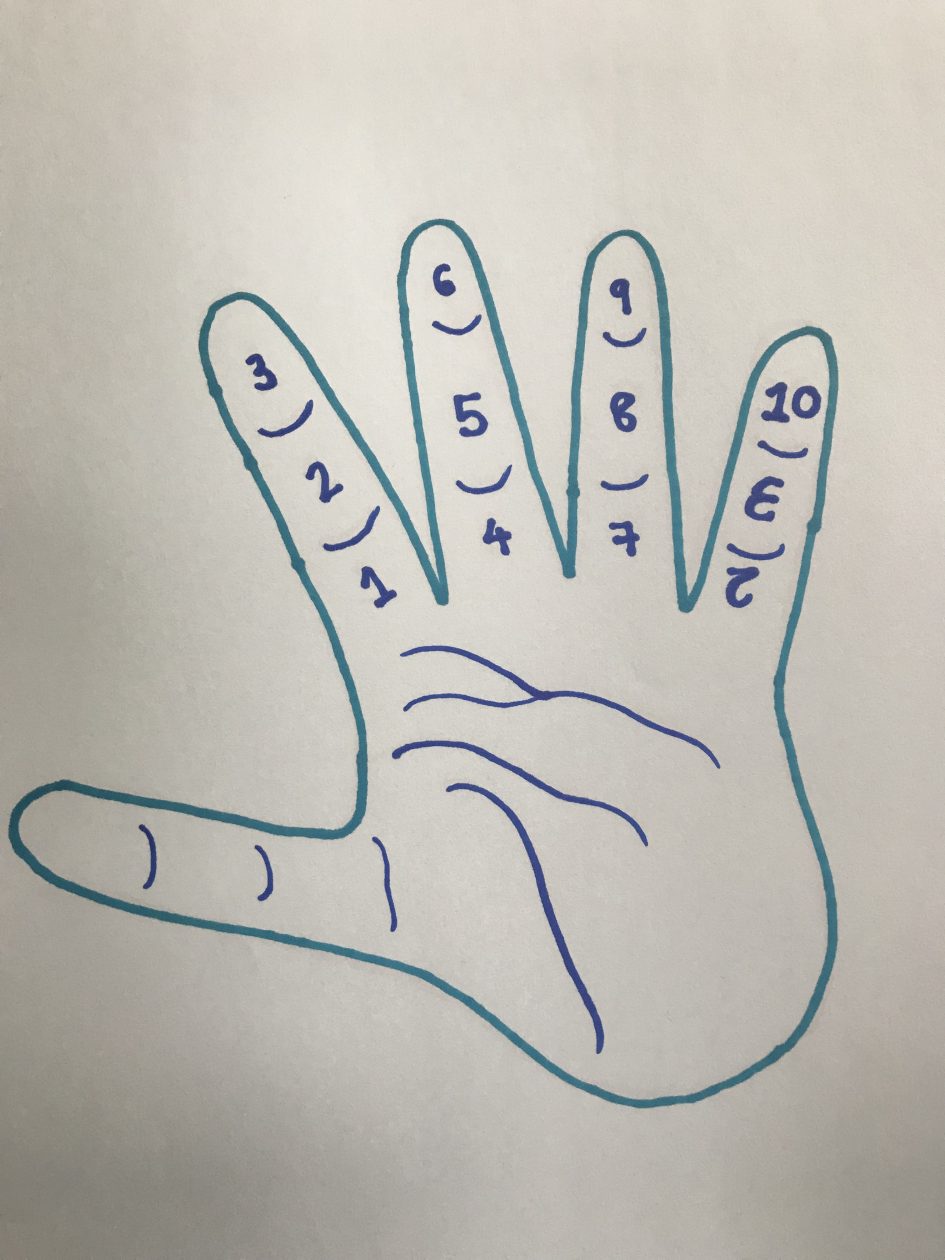 As noted, there are many complications and arguments for and against a dozenal system that I could write a whole blog post about it. However, I wanted to touch upon it here as something which has inspired me to open my eyes in terms of not seeing mathematics as a set and fixed structure.

Place value and number base systems are both concepts which I have never considered to be so complex until now. Even after doing my research for this blog post and revisiting my notes from the workshop, I am still struggling to pick these concepts apart and look at them from a very open mind. As I develop my thinking throughout this module, I am hoping it will become slightly easier to be able to analyse and question the mathematical concepts I have learned.

1 thought on “Place Value, Number Systems and Their Complexities”