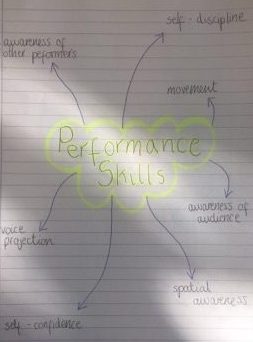 After creating a breakdown of performance skills which are represented on a mind map (see above), I have chosen to specifically focus on the aspect of self-confidence. Attached below is a lesson plan which focuses on building up the self-confidence of pupils in the area of drama.

This aspect was selected as a child’s self-confidence is an incredibly important part of their whole being. To have self-confidence means that a person believes in themselves – in their own abilities, qualities and decisions. As such, they are often assertive, positive and self-reliant. However, self-confidence is a fragile thing and needs to be nurtured in order to help a child feel able to express themselves which, in turn will help them survive and hopefully succeed in life. Equally, it is important not to damage a child’s self-confidence as this could also have major repercussions, making them feel worthless, withdrawn and unable to face challenges in later life. This aspect is obviously important in the area of drama but it is also clearly a crucial skill which can support pupils in their wider lives. Having self-confidence can help a person feel like they can take on or face the world with energy and determination and this in turn, can result in better relationships, help with getting a job and ultimately a more secure, settled life.

The lesson plan outlines a lesson which focuses on students developing self-confidence by encouraging the pupils to express themselves verbally and physically in front of their peers. Activities for this include games, role-playing and the presentation of short group improvisations. The games activity was introduced at the start of the lesson to try and make the pupils relax and loosen up so that they felt more at ease when speaking in front of the class. Having the games at the beginning also helps to start the lesson off on a high note with something fun, involving a lot of laughter and smiles. Likewise, the role-playing and presentation of improvisations were done in groups to avoid pupils feeling uncomfortable and under too much pressure if they had to perform by themselves. Using groups for the first lesson will then provide a stepping-stone for more drama lessons or productions with individual work to come.

Below is the lesson plan: