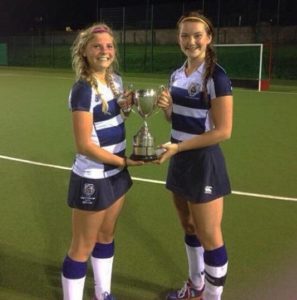 Hockey is a sport which I have played since I’ve been in primary 4. It’s something I train for 3 times a week whilst playing 2 games throughout the week. However, even though I’ve played this sport for many years I had never thought about the connection and relation it had to maths. Therefore, after being told to think about this before class I was very surprised how many links I found there were.

The Rules for hockey are as follows:

I then used my own knowledge of the game in finding strategies for playing hockey effectively. In field hockey they are different strategies and tactics both defensively and attacking to result in success.
The main strategies for hockey are formations. With a goalie in the goal defending at the back, there are ten outfield players. This means you have ten players to create formations with. Below are two common different starting formations. Obviously, these will change depending on what team you’re playing and where their strong players are on the pitch. The way the opposition presses against your team’s hit out can also be dependent on your team’s formation. It also depends on where your area of strength is in the players you have on the pitch within your own team as well. 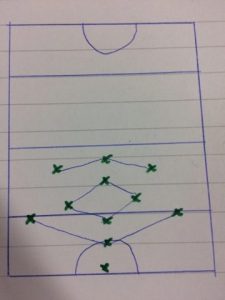 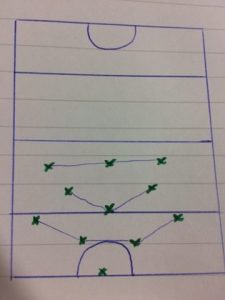 Hockey in relation to Maths 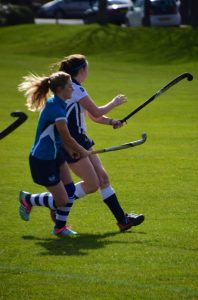 After doing research I realised the many connections field hockey has to maths. The design of the pitch is in the shape of rectangle which is separated into four sections. There are 3 lines marked across the pitch marking the 25m line, the 50m line (half pitch) and the 75m line. A hockey pitch also consists of two semi circles that make out 180 degrees which is called the “d”.
After our lecture on chance and probability, it made me think of this topic in relation to the game of hockey. It made me question what’s the probability of a successful attacking 3v2 situation? Or what’s the probability of 5 average attacking hockey players beating 3 very strong defenders? Or what are the chances for a goal in a 1v1 situation with a striker and a goal keeper?

After reading articles online of maths in hockey it made me realise how the smallest of things in the sport are related to maths! For example, the different shapes we form when passing, eg. triangle passing. As a defender it made me think how far away the defensive line should be from one another when we are talking a defensive hit out for it to be successful. For the hit out to be successful then it must eliminate some of the attacking line in the opposition. This topic has made me want to investigate this further and in more technical terms by measuring out the distance of how far away we should be standing from each other.