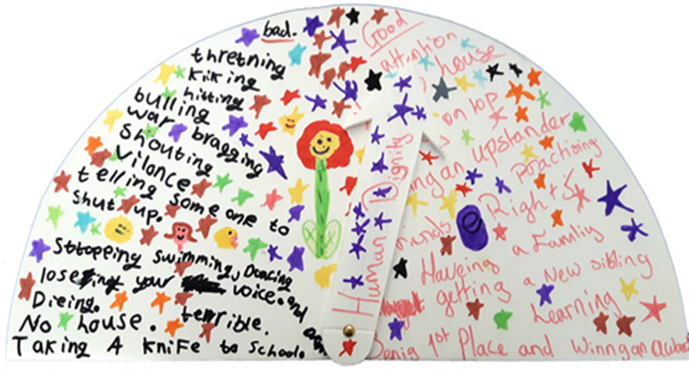 A newsletter for children, families and the people of Aberdeen about the Imagining Aberdeen Project

Children’s Parliament is working with children from four Aberdeen City schools – Imagining Aberdeen as a place where children are healthy, happy, safe and doing their best at school.

So far 300 children have taken part in workshops at school where we have been thinking and talking together about some big ideas like human dignity. The children created an amazing new way to measure dignity – above is one their diagnometers.

In the next phase of the project 5 children from each of our 4 schools will work with artists and a film-maker to represent their vision for the city.

What’s next for our Imagineers?

The next part of the project with our team of 20 imagineers is taking place on the following days:

Wednesday, 18th May is TEAM DAY
We are getting the full team together for the first time! The 20 children will meet each other and the Children’s Parliament team of artists who will help them in their role as imagineers.

Monday 23rd to Friday 27th May is MURAL WEEK + DVD PROJECT
Over the course of this week, the children will create a large-scale mural that represents all of the ideas from the 300 children who took part in the school workshops. We are also making a short film to capture all the great ideas our imagineers have.

The Imagining Aberdeen blog will be updated everyday during Mural Week with pictures and ideas from the participating children. You can get involved by leaving your own comments underneath the blog posts. It would be great to hear what you have to say! 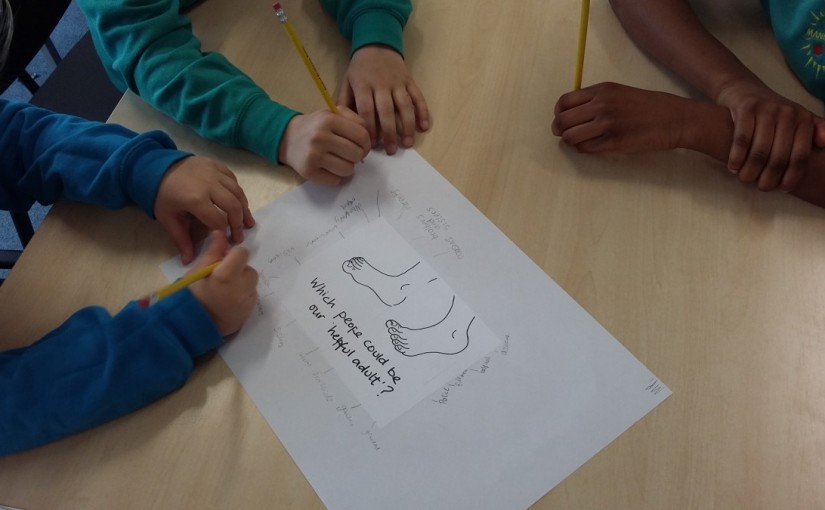 Bramble Brae and Manor Park Primary pupils came together to create a job description for an adult.

‘An adult should know:

An adult should be good at:

An adult should teach children 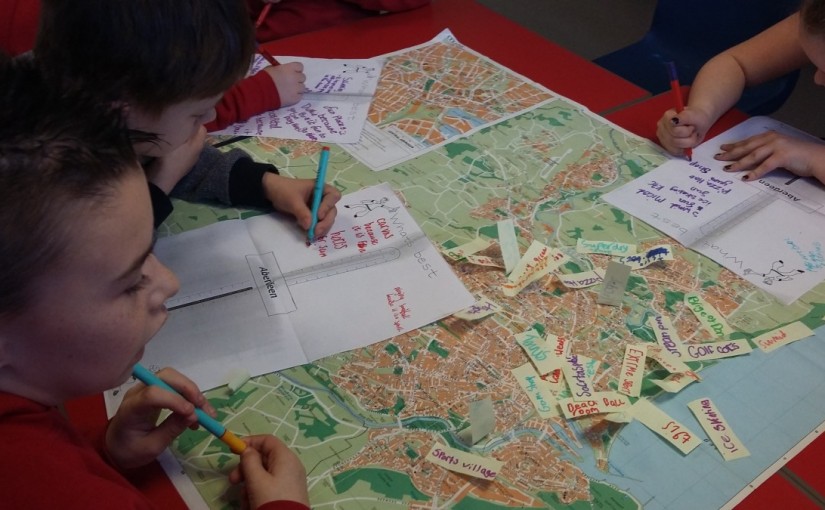 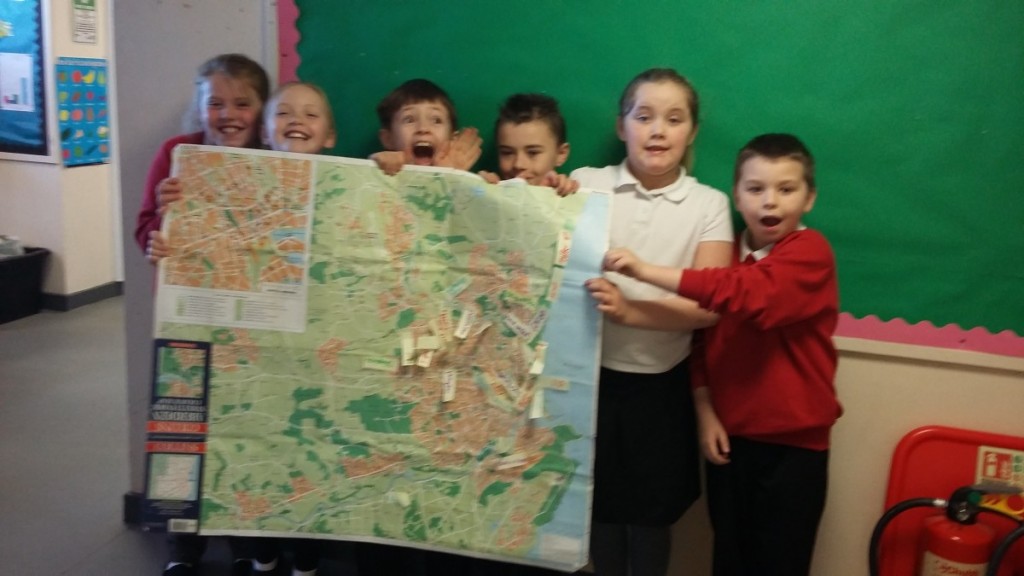 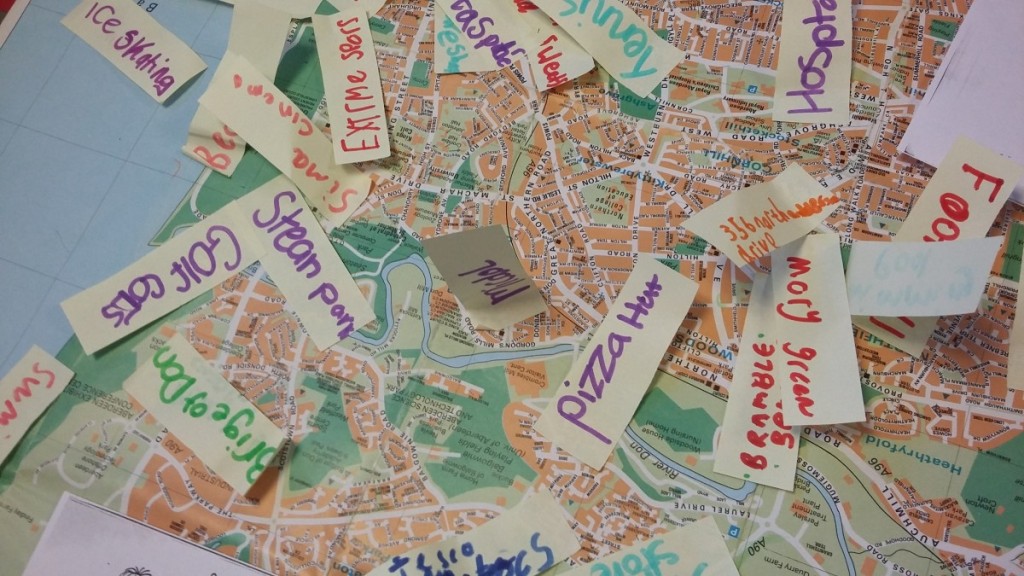 Children from Bramble Brae consider what is the best things about Aberdeen and also things that get in the way of them being healthy, happy and safe.

“The golf course is best because you can play golf, learn new skills and beat your friends. We like the Children’s hospital. When you are ill you can go there and get checked. They nurture you. The bad things are drunk people in children’s play parks and dog litter because people can stand on it and they don’t want a smelly shoe. Drunk people have to stop buying drinks, threatening kids and scaring them. Maybe like in the olden days, drunk people can be put in a public clink (head and arms poking through) and tomatoes thrown at them.” 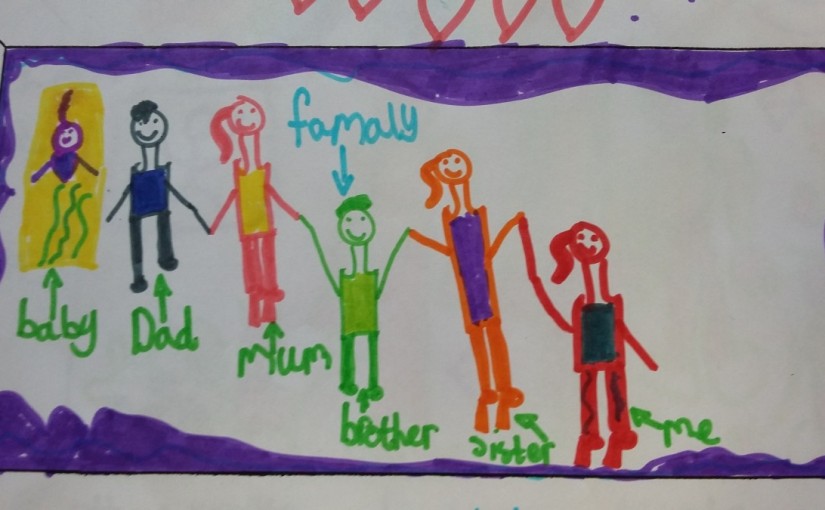 The pupils from Bramble Brae have created family portraits and have been discussing why a family is important and what they need.

“A family is important because they are there for you no matter what. A family needs strength. This means they need to believe in each other and be encouraged but also to be able to pick things up. Divorces get in the way because your family is split and you don’t get to see everyone.” 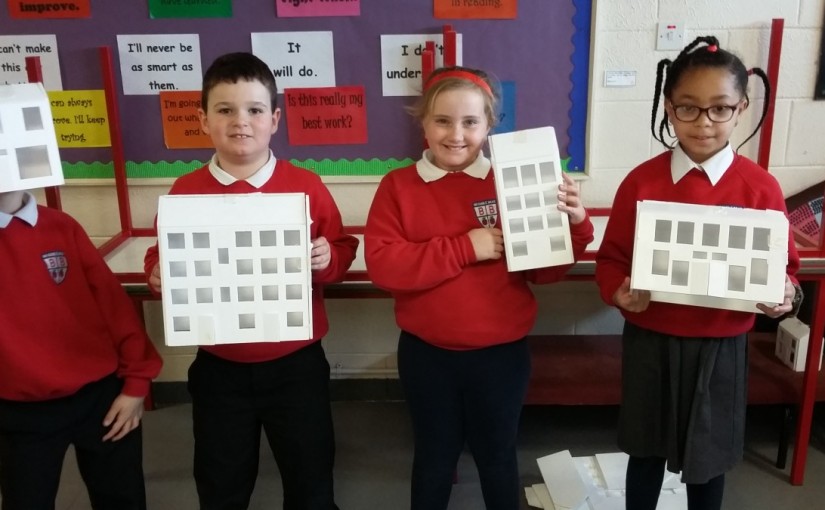 Investigating what children need to be healthy, happy and safe in their community.

‘The community is really friendly and everyone gets along. If we could change anything about our community we would get the police to handle the smaller situations. Police here focus on the big things. As the small situations often turn big, they should sort this out first. We’d also ban motorbike and create bumpy roads to slow down cars.’

‘Granite Hill Road is really dangerous with fast cars. We’d like a lollipop lady or man so it is easier to cross. If we could change anything we would bring rock climbing to our community and a train station, so that we can go on holiday. We really like that our friends live close by and we can play with them.’ 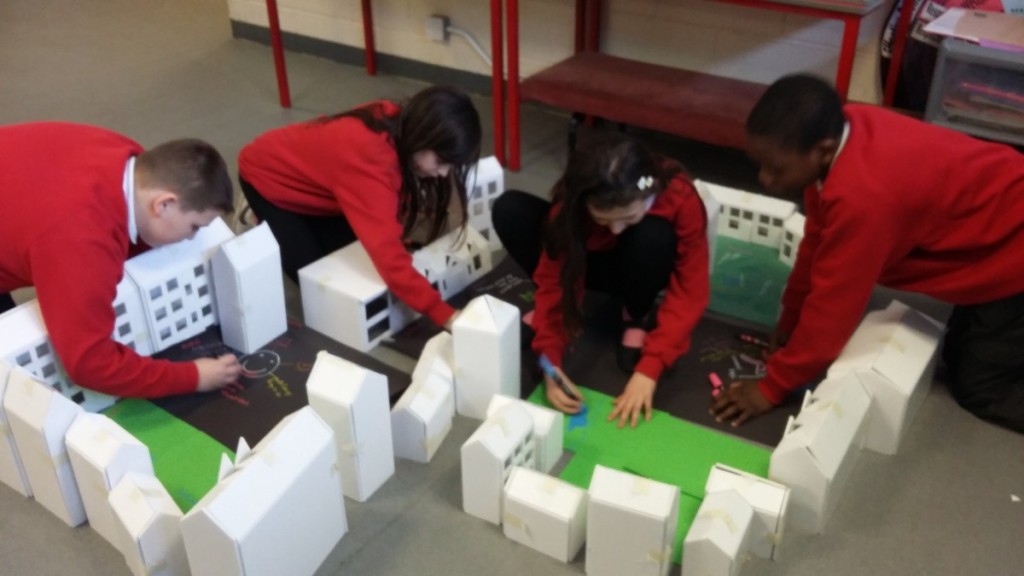 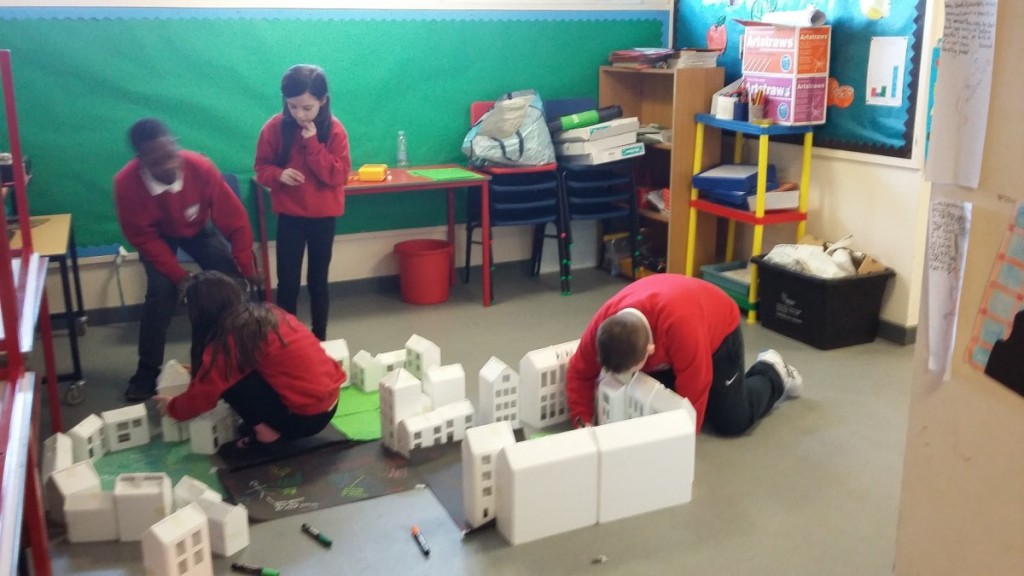 Not getting enough attention can get in the way of doing our best at school. 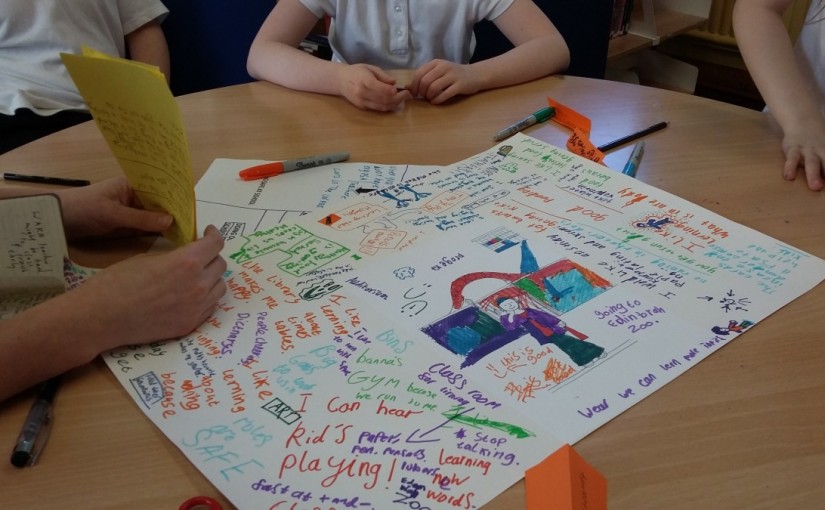 Children imagine a school where everyone is healthy, happy, safe and everyone can do their best. 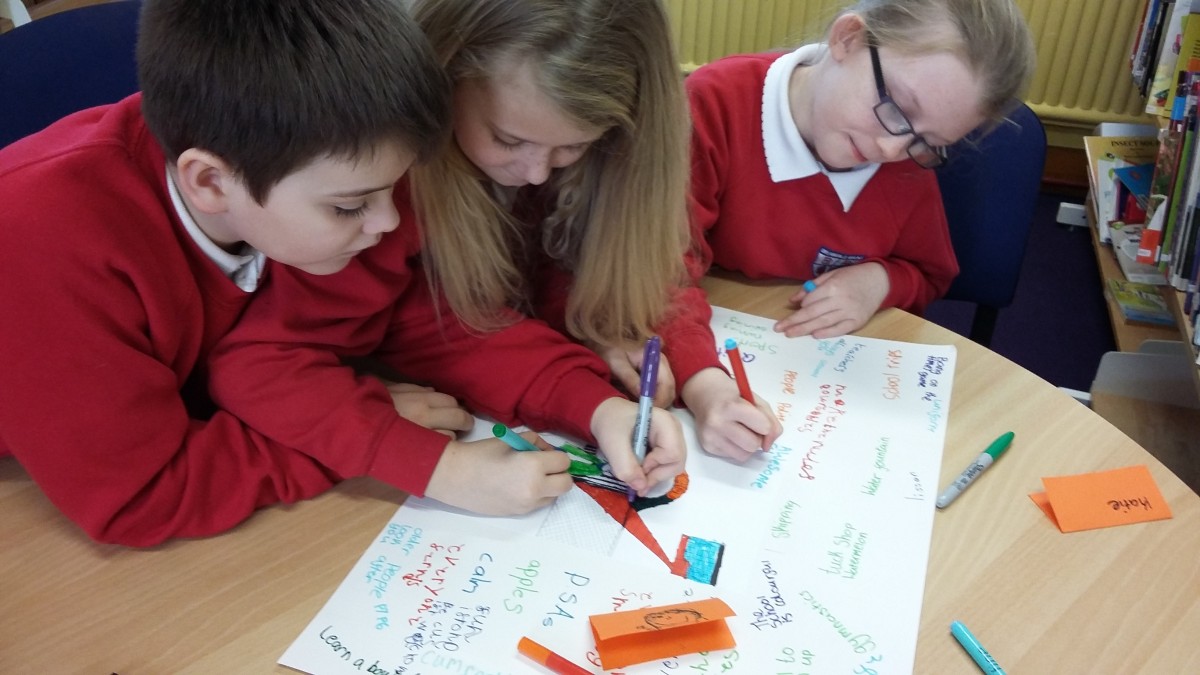 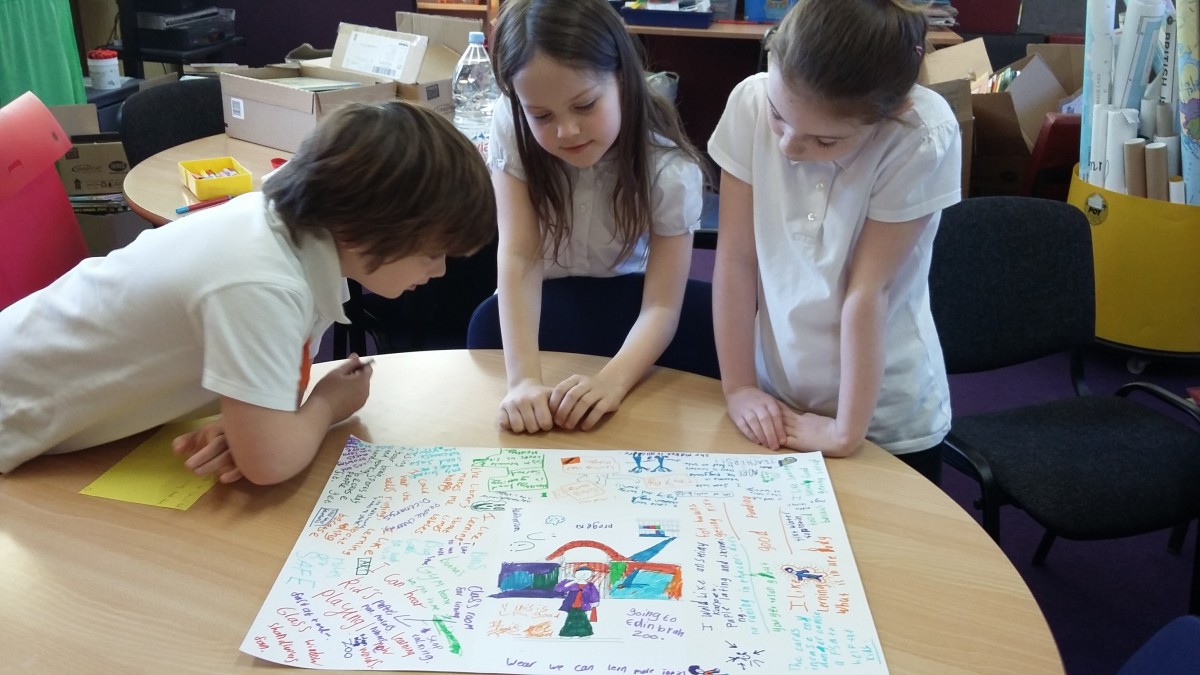 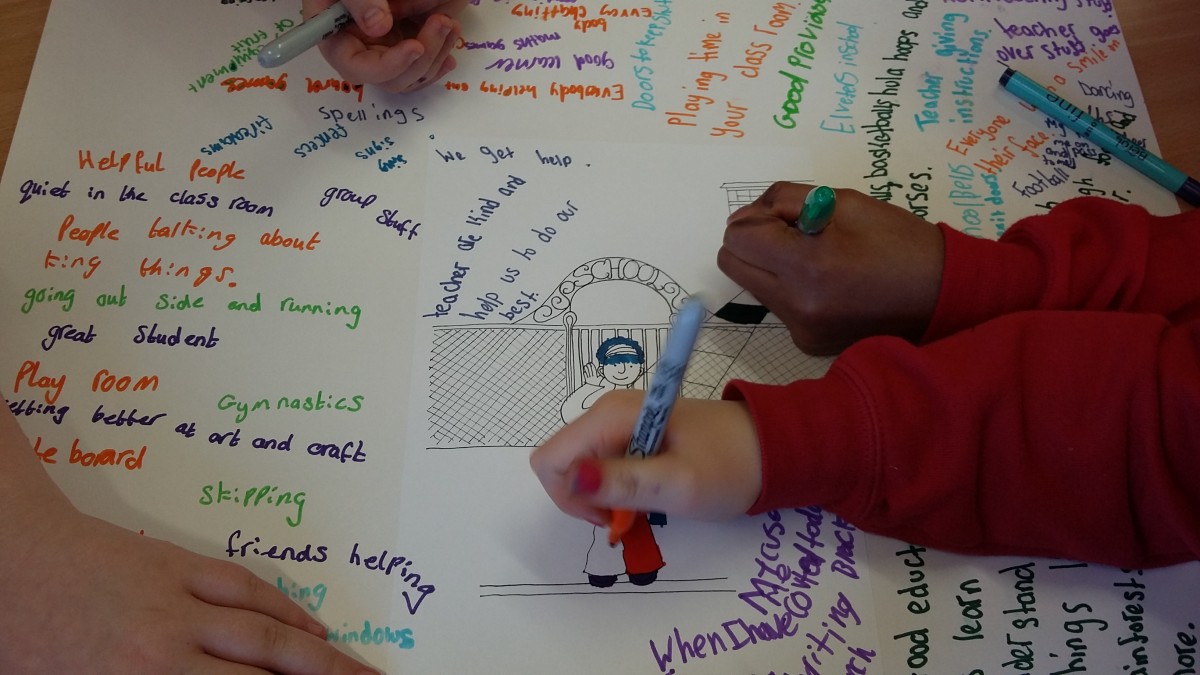 “We have been concentrating on what makes us feel safe and healthy at school. In the school we are imagining there is an Auditorium because we always put a stage into the gym hall when we are doing a play. So if we had an Auditorium we’d have a real stage. I want the gym hall to be free.”

“Anger problems get in the way of doing our best at school. In the school we are imagining there is big glass windows, so teachers can see us.”

“When you don’t have enough PSAs it gets in the way of being safe at school.” 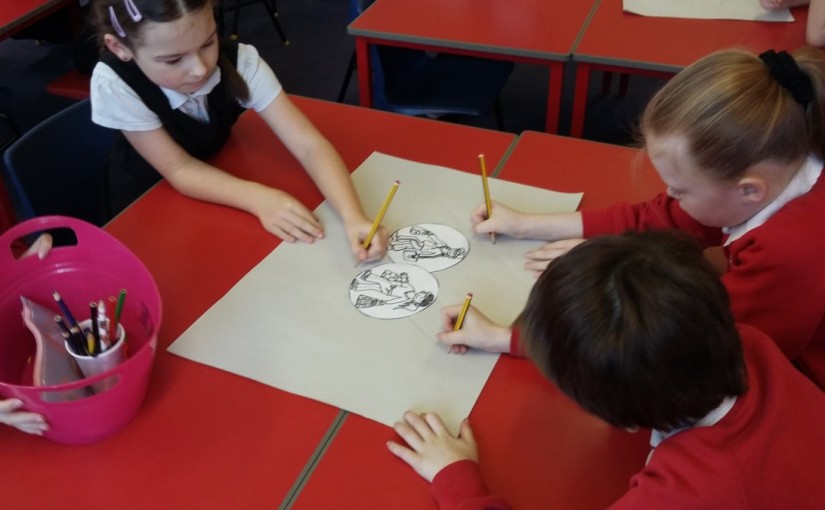 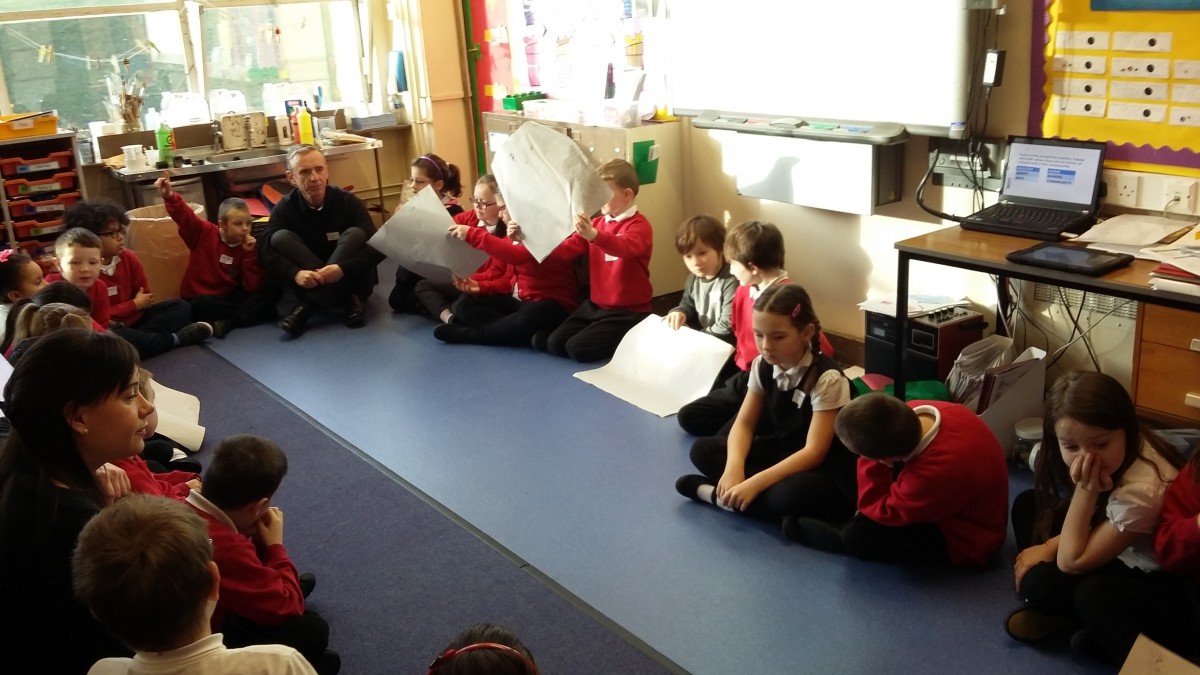 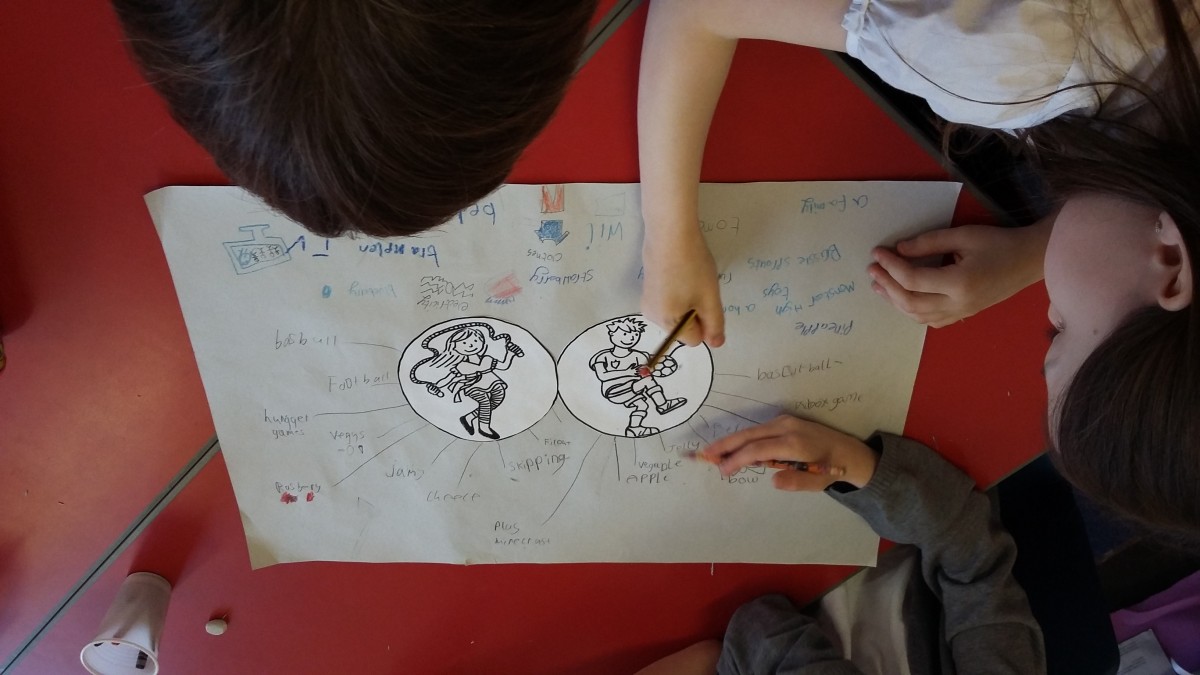 ‘In our team we worked together to make a poster of a 12 year old. We had to write down ideas that would make a 12 year old safe, happy and healthy. Then we had to think of things that would make us feel special and important. We used these ideas to make a digni-ometer and we split it in half – one side showing what gives us dignity and the other showing what makes us sad.’ 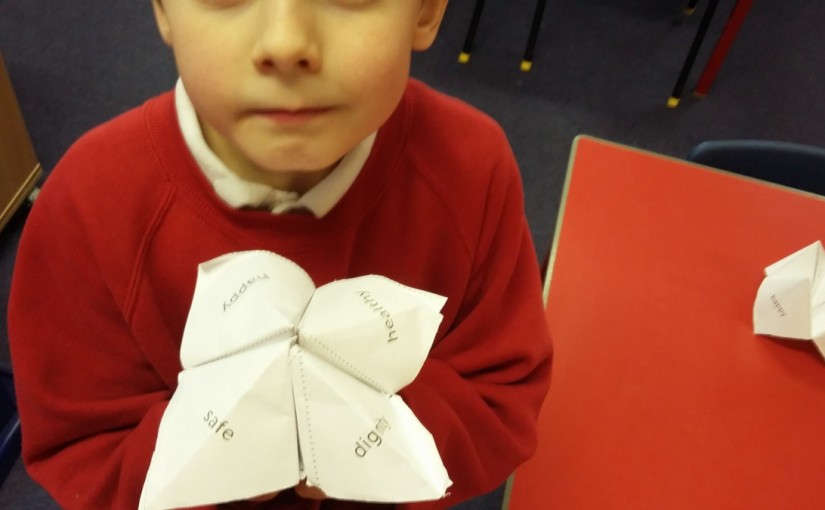 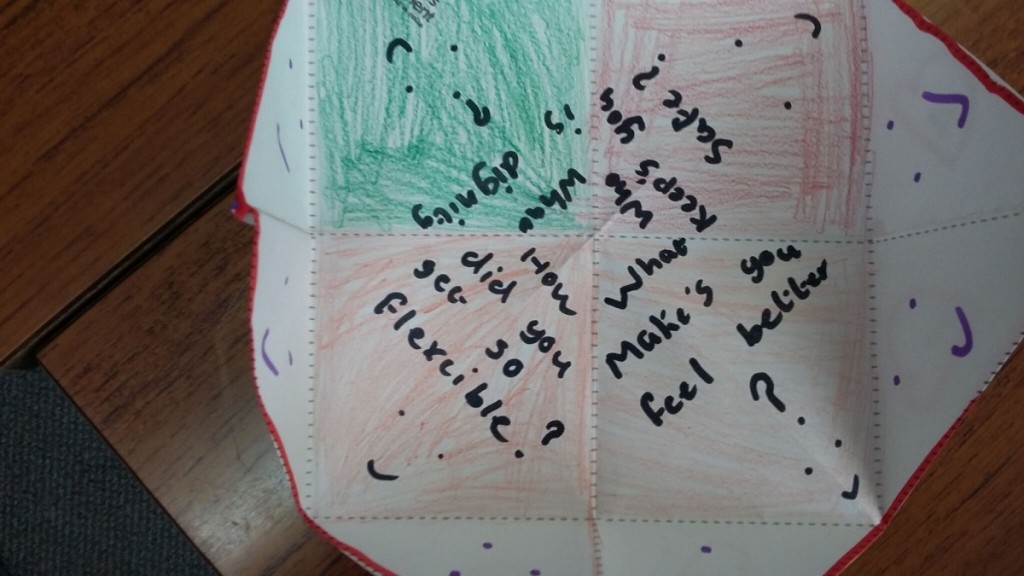 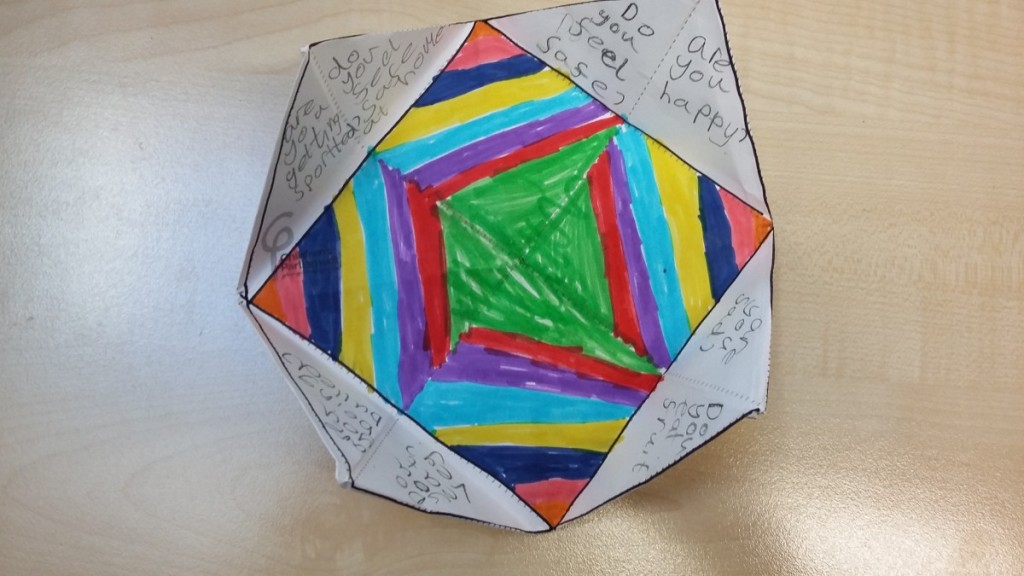 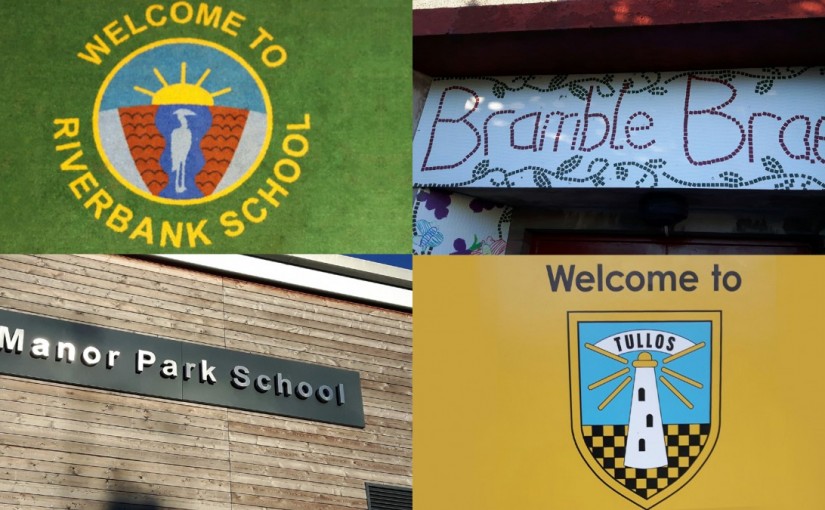 IMAGINING ABERDEEN
In 2016 we will be working with Aberdeen City colleagues on an exciting new programme of work engaging with children and communities in the City. Our school partners will be Bramble Brae Primary, Manor Park Primary, Riverbank Primary and Tullos Primary. The programme focuses on imagining Aberdeen as a place where children are healthy, happy and safe.