What is the odds that you’ll win a toy playing the ‘claw’ arcade game?

First of all we should probably consider what is probability and chance. So what is Probability?

Basically probability is how likely something is to going to happen. Lots of different things can be said to be probable to happen for example, the common phrase ‘it’s probably going to rain today.’ This is the common phrase of deciding if something is going to happen. I can better explain this through the common tossing of a simple coin. As you toss a coin there can only ever be two results, either heads or tails. The probability of getting a head is ½ and likewise with tails. This is just a simple way of explaining what probability is.

Okay so now we understand probability. What is chance? Well, chance is similar to probability in the sense that chance is the likelihood that a particular outcome will occur. 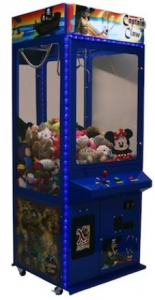 This here is an example of the machine I am referring to. And now everyone is asking their selves the same question. HOW DO WE WIN THIS?

Well I’m glad you have asked because I have done some research for this and have calculated the chance and probability of winning.

These claw games are designed so the claw sporadically gets strong enabling the player to win the prize. In my research I have found that some even weaken the strength after a short time so individuals get a sense of victory before it is taken from their reach. This game actually  is programmed to ensure players cannot win this game. Unfair, right? So what is in the programme? Well, it is set to only go strong after 21 games. So you have to play 20 games before you can win the prize. Well, that’s not the only disturbing part, it can even be programmed to go make the claw weak after 10-25 seconds.

So what is the chance and probability of winning?

As I have mentioned previously, in order to be lucky in winning this game you have to play 20 games before you will hit a lucky strike and win a prize. Due to such high odds the chance that people are likely to win is slim. Some people might hit it lucky and begin the game on the 21st cycle however, other people may take at least 21 tries before becoming successful. This is a very frustrating but addictive game that everyone will have at least tried once. So why do they do this?

Phil Edwards (Daily Mail, 2015) discovered many of them are rigged for profit. With the settings being changed continuously from weak to strong, this suggests that the game down to hugely luck rather than skill. Edwards comprised a video (situated below) that explains the operator of the machines can set how often they pay out, and the strength of the claw will be dictated by how much money has been put in.

How are they rigged? Well… say a prize costs £5, and it is 20p or 30p to play each time and the operator wants a profit of 50 percent, the claw will only allow the player to win one out of every 21 games. Edwards has proven this through his careful studying of the machines.

It is important to remember: this is randomised, though, so the winning game cannot be counted or worked out.

The chance of winning is 1 in 15 people would receive a  prize from the claw machine, this is a huge profit to all arcade companies.So basically, the game is receiving 2 to 5 more money and profit because of this impossible game.

Can you increase your chances of winning?

To increase your chances of winning you should look do some research into machines with a fixed strength. Right okay, so what does this mean? Basically, the claw that grabs applies the same grip each time and then does not weaken after the prize is claimed.  You can also increase your chances by going for stuff close to the drop zone and stuff that is on top and not blocked by lots of other and heavier prizes.

So overall from my research, I have discovered that the chance and probability of this claw machine cannot in fact be measured or calculated  to ensure a concrete win. However, if you play the game approximately 21 times you will have a higher probability of winning this game.