This we week we had the pleasure of meeting a class of primary seven from Bellsbank. Before meeting the children, we were informed that they were from deprived areas and had free weekly music lessons. The children’s appreciation for music was evident from the very beginning. The task was to allow the children to teach us how to hold and play certain cords on the violin. I was seated net to one of the pupils and so had the pleasure of learning from her. Having the one-on-one allowed not only me to ask questions about her music interest and lessons, it gave her the opportunity to ask me about university and the course. Later on, I was informed that a lot of the pupils prior to coming to this UWS did not see university as a option for them, however after coming they realised that it was more of a possibility than they realised. What was very interesting to hear was that a few children realised they wished to peruse a career in teaching. This was pleasing to hear as it meant that the children were allowing themselves to plan further into the future and they had a sense of hope.

We had our first input in Dance, I was dreading this input as I hate any form of physical exercise and I do not like dancing. However, as I have been trying to do through out this whole module, I told my self to keep an open mind. For our warm up, Zara played a series of different music and as a class we lined up and the person at the start created a short dance move and everyone mimicked it. When the music changed the next person in line was to come up with a different dance move and so on. I can safely say that I disliked every aspect of this warm up, I felt completely out of my comfort zone and although I kept telling myself it wasn’t as bad as I thought, I was unable to enjoy it. When I noticed that it would be my tune to create a dance move shortly, I sunk to the back of the line. Looking back now I wish I hadn’t and had just went through with it, however I was just too uncomfortable and anxious. It was too quickly into the input and I wasn’t able to allow myself to fee comfortable in the different environment. I understand that there may be certain children that feel the same way I did, and although as a teacher it is important to be able to give children that small nudge to do things, they may not be comfortable with, it is sometimes just as effective to allow them to participate how much they want. For example, during the warm up, I didn’t exclude myself entirely, I joined in and I followed the moves just like everyone les, however it was just when it got to my turn that I opted out. Later, Zara explained that when teaching Dance there are ten basic moves to teach children. 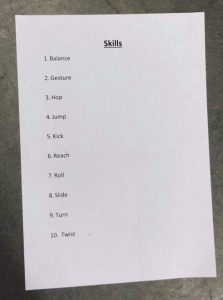 in groups we created a dance move for each term that we thought was appropriate, each group was given a series of numbers and we had to correspond a dance move for each number, this created a basic dance routine amongst each group. This aspect of the dance input I did not mind as we were in smaller groups and the moves were short and basic. Being in a group that had my friends also made me feel better as I was with people, I felt comfortable with. This is also something that I have noted that can be effective when teaching dance and there may be student who feel shy and reluctant. Putting these children in groups with their friends can be effective as they can feel less under pressure and are more likely to enjoy themselves and participate. The most important thing a teacher can do when teaching any aspect of the creative arts is first establish a safe and comfortable environment that children feel safe to express themselves with out feeling judged.