We’ve only lived in Neilston for just over a year and one of the reasons that we moved there was the fact that’s on the edge of some very nice countryside with a wealth of walking opportunities nearby. So, it was an early Autumn Sunday and dry for once so we took a wander south through the town and then west along Kingston Road for a bit of an explore. 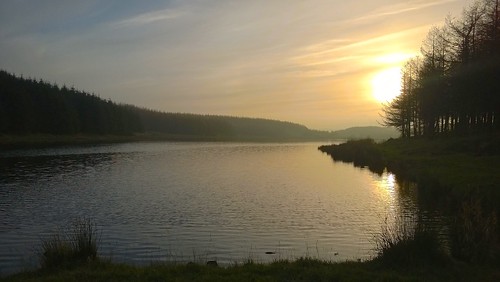 It wasn’t long before we spotted Craighall Dam through a break in the trees on the left on the western slopes of Neilston Pad, the highest point in the area and reputedly the remnants of an extinct volcano, so off-road we went. It was a wee bit squelchy underfoot but that soon cleared onto a reasonably decent path circumnavigating the reservoir. I recorded the walk using the Endomondo mobile app so that’s available here and comes with a location map and lots of walking statistics like distance, duration, speed, altitude, ascent, etc.

Going by the number of damp dogs and their owners that we encountered, it’s a popular spot with dog walkers and there’s a reasonable number of parking spots nearby if it’s too far to walk to. If you’re interested in birdwatching, then there’s a fair number of wildfowl on the water – there was a family of mute swans, some mallards and I think I spotted a little moorhen as well but the light wasn’t great. 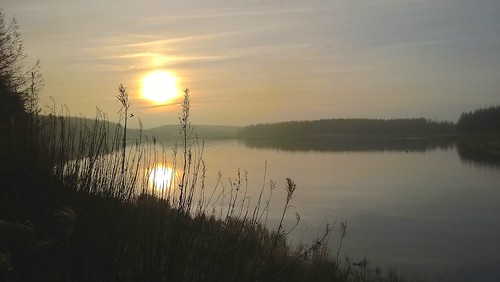 Sadly, I only had my mobile phone camera with me but I managed to get a few decent shots (all viewable on my Flickr photostream).

There’s not a lot to say about Craighall Dam itself. It’s one of many little reservoirs dotted around the area and the only feature on it worth mentioning is the ruin of an old boathouse and jetty, which is listed on the RCAHMS Canmore archaeological site.

Definitely somewhere to go back to. It’s an easy stroll and there are other dams nearby worth checking out.

While searching for some background information about where I live now, I came across a very useful site for researching where you live in Scotland:

The Gazetteer for Scotland

This is a Scottish geographical encyclopaedia featuring details and maps of towns, villages, bens and glens from the Scottish Borders to the Northern Isles.

It’s supported by the Edinburgh University School of GeoSciences and The Royal Scottish Geographical Society and bills itself as the first comprehensive gazetteer produced for Scotland since 1885. It includes tourist attractions, industries and historical sites together with histories of family names and clans, biographies of famous Scots and descriptions of historical events associated with Scotland. It also contains the text of Groome’s 19th Century Ordnance Gazetteer of Scotland to provide a historical perspective on many of the places described.

With over 22,000 detailed entries, the Gazetteer boasts of being the largest dedicated Scottish resource created for the web and is growing constantly. It may look a bit outdated by today’s web site standards but you can easily browse the data by maps and places, including the pre-1974 county names as well as the modern council names, by historical time-line or you can just search for any word or group of words.

Microsoft has just announced Visual Studio Community 2013.  It’s pretty much a full copy of Visual Studio, which retails for well over £300, and you can use it to create applications for Windows, Android and iOS.

The deal is that it’s available for use by individuals, non-profit companies and teams of fewer than 5 developers, which covers an awful lot of amateur developers, clubs, schools, etc. Here’s the blurb from the page:

Visual Studio 2013 Community can be downloaded from http://www.visualstudio.com/en-gb/products/visual-studio-community-vs

I regularly save links to web apps, utilities and services that I think might be useful or interesting to my Diigo library. Diigo is a free-to-use service that lets you save, tag, annotate and share bookmarks using a browser toolbar or bookmarklet.

I’ve been using it for some years now and it’s grown into a decent research tool and now lets you save web pages for reading later, highlight and annotate web pages, build lists and more. There’s also a social element in that you can join groups and follow other users. There are even some premium features if you want to pay them some money but the basic service is totally free.

So, in the spirit of self-promotion, feel free to follow me on Diigo or just subscribe to my RSS feed.

Build, test, scale and more all from one place. – this week, Mozilla’s released Firefox Developer Edition: a browser packed with developer-friendly features like WebIDE, Valence for cross-browser debugging, Responsive Design View and more.

WebIDE is the replacement for App Manager and lets you build fully functioning applications from your browser or Firefox OS device. Responsive Design View lets you see your app or website as you resize it for different platforms and Valence lets you debug for different browsers, including Chrome and Safari. Other handy tools we’ve seen before like Page Inspector, Web Console, and Web Audio Editor are included as well.

With the release of Mac OS X 10.9 (Mavericks), Apple have included a utility that will help you migrate accounts and data from a Windows PC to a Macintosh.

Apple’s Windows Migration Assistant requires at least Mac OS X 10.7 or above and Windows XP SP 3 or above.

I’m assuming they’ll update the tool to accommodate Windows 10 whenever that OS is released.

Welcome to Hodgepodge, a place for things that have piqued my interest and might do the same for others.

This is where I’ll be sharing my thoughts on topics that I think are worth sharing and that might even be useful or informative or just nonsense.

Feel free to praise or even deride anything. Comments of any other kind are welcome too.

All manner of things interesting!