On Tuesday, we had our first of the values workshops. For this, we were split into 4 groups. I, unaware of what was to come, was put into group 4. All four groups were handed an envelope, that included items in which we had to use to make a resource for freshers coming into the university that they may find useful. In our envelope, we had an elastic band, one post-it note and a pencil. That was it. Immediately ideas started circling round the table. A map? A game? What could we possibly do with these extremely limited resources?!

As a group we started discussing what we could have benefitted from when we first arrived at uni. For me, it was simple: people to speak to and become friends with. This was something I seriously struggled with when I first came to university. What we discovered while discussing topics was that: a) Every other group had more resources than us and b) they were getting far more encouragement from Carrie than what we were. This (despite knowing it was an exercise of some sort) disheartened the group. It also made us question if what we were doing was correct.

In the end, despite the lack of supplies, we had created two (pretty genius, if I don’t say so myself) inventions for freshers to use when they first come to university, using a combination of experiences and contributions from within the group. The first was a map, using the envelope, post-it and pencil, displaying what building each lecture would be in for our course. The second was a friendship bracelet. The idea would be that the bracelet would be placed on the chair next to you in a lecture, so someone potentially feeling the same way, or just wants to sit with you, would know that you’re looking to meet new people. Both of these ideas seemed well received from the groups, but Carrie gave us no support or encouragement throughout the presentation. Again, we questioned our motives; had we completely lost the point?! As the rest of the groups presented, she showed a variety of interest. It was noticeable that it increased from group 4 up to group 1 to which it came across that she loved their idea. 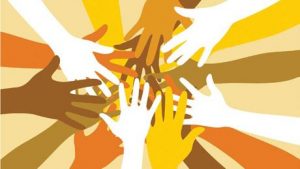 The message behind this workshop was that despite lack of resources in an environment, a childs’ social background, ability, race or even what kind of socks they chose to wear that day, everyone has the right to being treated equally and with respect. It raised a whole range of issues, from social divisions to being appreciated in society for being who you are. What I also took from it, was that to always trust your instinct. As we received next to no encouragement, we started to doubt our own, perfectly valid judgements. I found it, overall, a very interesting and beneficial workshop.