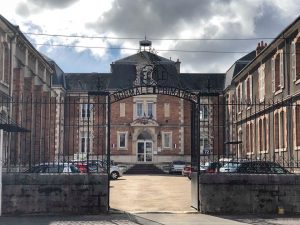 School of teachers and education Academy of Orléans – Bourgogne Centre

After arriving on Sunday to the ESPE teacher-training centre in Bourgogne, Orléans, our first proper day in Orléans was on the Monday (12/03/18). We woke up on the Monday morning ready to meet our host of the programme called Nina Huss, at 10:30am. Nina told us she would help us sort our bus passes for the duration of our stay, give us a tour of the centre of Orléans and take us to a University of Orléans ESPE course, in the teacher training centre in Saint Jean, about the French education system.

We took the bus to the centre and strolled into the centre square where the statue of Joan of Arc stands. Joan of Arc, nicknamed “The Maid of Orléans”, is considered a heroine of France for her role, leading France to victory, during the Lancastrian phase of the Hundred Years’ War and was canonized as a Roman Catholic saint. Nina showed us a bookshop, which is great for children books and suggested we get one before we leave for our future students back in Scotland. She took us to get our bus passes and gave us helpful maps for the bus lines. On our way to our Orléans University course we walked past Joan of Arc’s house. 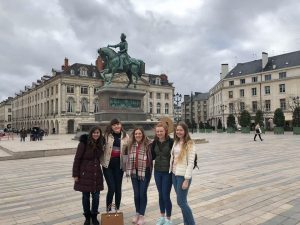 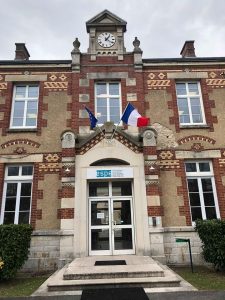 We got lunch at a French bakery beside the ESPE School of Education training centre in Saint Jean and then went to our course. Claudie Grenet (corresponding relations international) in French greeted us after some chickens chased us into the building and we began the course.

Claudie first spoke about the French education system and how it is different from the Scottish system. In France you start school at age 6. This is different in Scotland as we start at age 5. The French also have nursery like us in Scotland, “école maternelle”, but they have three years of this starting at age 3 to age 5 (PS, MS and GS). This is cycle 1. The French have 5 stages in the primary school, “école élémentaire”, called cycle 2 (Scottish early stages) and cycle 3 (Scottish upper stages). Cycles 2 goes as follows; CP – age 6-7, CE1 – age 7-8 and CE2 – age 8-9. Cycle 3 goes as follows; CM1 age 9-10, CM2 – age 10-11 and then cycle 3 carries on into their collége (secondary school). Collége is four years long, starting with 6éme –the last in cycle 3. This then follows with 5éme, 4éme and 3éme in cycle 4. Finally cycle 5 is lycée (secondary school) for four years. During cycle 5 there are different exams to go onto to do different degrees at university. The French finish school at age 18, which is the same as in Scotland if the pupil decides to stay on through all the years. 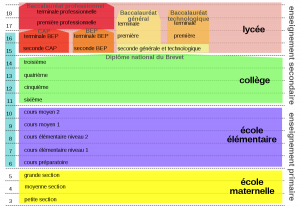 If one decides to go on to do a Primary Education Profession at university the course is four years, the same in Scotland.The ESPE have models to follow just like we do in Scotland when training to be a teacher. The organisation model includes factors such as; time management, classroom space, classroom resources and grouping in the classroom. Education aspects they think are important are; how the pupil’s work is evaluated, making sure the pedagogical steps are being implemented, the displays in the classroom, the organisation of the class, carefully suited class projects and the teacher’s own interventions. Along with these other factors such as; the teachers posture, the classroom rules, the relationships in the school and the trade in the classroom are also important. 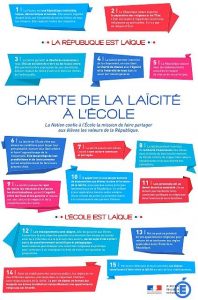 One of the general principles for the education system in France is that public schools are “Laïque”. The laïque principle was introduced to separate the civilian for their religion whilst in school. Laïcité, literally “secularity”, is a French concept of secularism. It discourages religious involvement in government affairs, especially religious influence in the determination of state policies. The aim was to equalise every pupil, there is respect for all beliefs equally. In school is there should be no recognition of any of them. By not showing any signs of your religion everyone is seen as equal, there are no differences and discrimination and racism is avoided. Religion is kept to ones private life. The Catholic church (Christians), make up the greatest majority of those living in France. Because of this principle, Religious education is not a subject taught in school.

This is a great contrast to Scotland as a large majority of public and private schools let you show your religious beliefs openly and freely through any ways, may that be how you dress. They have religious assemblies and do work in class about religious holidays and ceremonies. But I believe this isn’t defining equality as in Scotland we teach mainly about Christianity and don’t touch on other religions, forcing those who don’t believe in Christianity to sit in and listen. It is only in the topics of R.E. that a school may touch on other religions around the world.

During this 6-week placement I got an insight into the Scottish Primary Education system. I taught group and whole class lessons covering every curricular area. I learnt the processes and stages of teaching a lesson effectively, using engaging and positive techniques. I was challenged with have a class that had three children with learning difficulties and this was a good experience for me as I learnt a lot form them. I learnt how to deal with different behaviours effectively to get the results I wanted and how to build trust between a teacher and pupil. By the end of the placement I felt I had learnt and accomplished so much. My knowledge had grown drastically and I was able to teach a class on my own and deal with all kinds of behaviour, from the start of the day right until the end. My feedback from my tutor and class teacher was all positive and they guided me in the right direction for improvements, alternative ways and next steps.

I was lucky to have a supportive school through my placement, which really helped me improve my teachings. I feel next time I teach I will have a much more vast knowledge on how teaching works and how to teach as this experience taught me so much for my first year of university.

My action plan for my next placement is to use all the knowledge i collected from this placement and build upon it to make my knowledge even deeper and greater.

During the summer after my first year of university had finished I become a nursery assistant for the summer. This was a great opportunity for me as it enabled me to carry on my knowledge from my first year placement into the nursery environment. I was responsible for children from the age of 2 to the age of 5. I got a sense of what it is like to work with the youngest children of the school system and learn what roles and duties it entails. These included; teaching, reading, preparing snack and lunch, doing creative activities, being responsible for outside play, toileting, cleaning and assessing children’s progress.

I decided form this experience that I prefer to work with older children had they have more prior understanding and knowledge which aids teaching. Whereas in the nursery it is a lot of play and less teaching. I feel I could have been more involved with the teaching aspect of the job as that is what I was studying at university. If I got this opportunity again I would ask to do more teaching along side the other assistants.