Global warming; a phrase that could divide a room.

Global warming is something that a lot of people know about but some not to a deep understanding. I would say I was one of these people until exploring this topic. Global warming can open up a multitude of controversial conversations and debates as it encompasses many factors. A large factor that has contributed to earth’s temperature warming is the damage we are doing as humans, this allegation is one that some people do not believe.

Desertification is causing agricultural land close to deserts to become unsuitable for farming.

Flooding is causing crops to be wiped out that are growing in low-lying areas.

Due to the ice cap melting, we can now see the sea levels increasing. Coastal land is at risk of flooding, more so land on deltas. Also we can see that sea defences are under increased stress. Global sea level is expected to rise between 3.5 and 34.6 inches in the next 100 years. 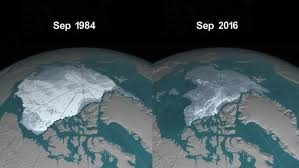 From this image, it is clear that the ice cap has decreased in size dramatically in the space of 32 years. After seeing this photo and similar ones, I felt shocked and almost guilty that we have allowed it to get this far, knowing that our actions as  humans are having this impact. This decrease in the ice cap is pushing animals like polar bears that live there to take other means to survive or live in different conditions, or even for some not to survive.

What can we do?

In Scotland, we are fortunate to have a supportive government with a vision of a cleaner Scotland.  Some actions they have taken include: 5p bag charge to decrease plastic use, using renewable energy eg wind and promoting low carbon living. This motivation from the Scottish government has rippled into Scottish schools, meaning healthier and cleaner lifestyles are promoted to children. In doing so, we can create a better living and learning environment for children, as well as providing them with perspective and awareness of how they live by educating them on the impact of climate change.

After taking the WWF ‘ footprint calculator’ questionnaire, I felt quite guilty for the carbon footprint I am creating. I think that this tool would be useful in a class to give perspective to the children of their own impact on the earth.

If we all make minor changes in our life for the sake of our planet, we could together have a major impact.